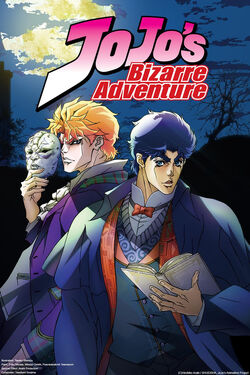 For the first time ever, JoJo's Bizarre Adventure will be released worldwide via Media distribution service, Crunchyroll.

Not only will the service have the entire first season for viewing, JoJo's Bizarre Adventure: Stardust Crusaders will be aired starting April 4, at 9:30am Pacific Time, 1 hour after Japanese broadcast, and will be available for Crunchyroll members in HD (with official subs).

(edited by MetallicKaiser)
0
Can i sign in it for free and watch the episodes as i want?
(edited by Gold Experience)
0

I believe watching for free is permitted, but only a week after the episode is released and in Standard 360p definition. If you're a member, you can watch it immediately and up to 1080p.

Will there be a subtitled version?

(edited by A Fandom user)
0

Yes, crunchyroll will release the episode 40 minutes from now, complete with subtitles. You can sign up for the free 1 month premium trial to see it amd cancel later if needed.