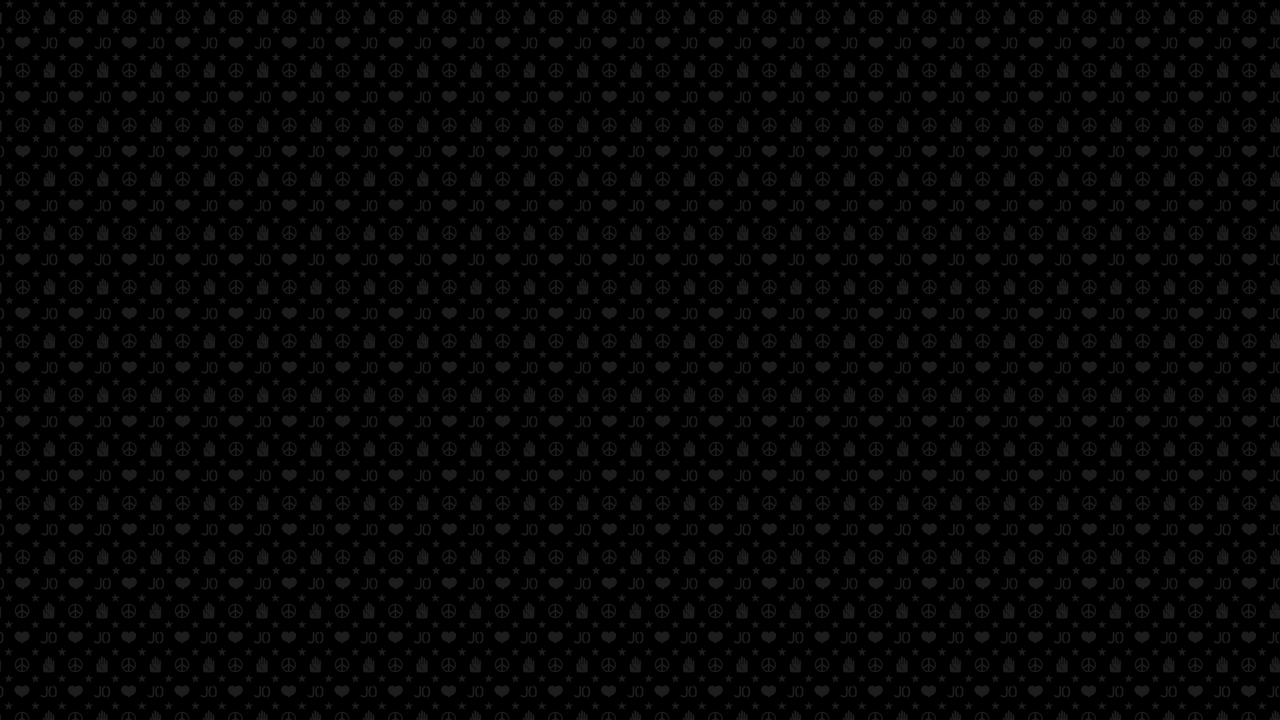 I come in piece from the One Piece fandom! You can call me Takeru!

I am on Stardust Crusaders, and I am loving the series so far!

QOTD: How would you feel if the entire series was animated like the intros?

Just a little error (I think) on the mobile app. The face of the antagonists group is seemingly Jonathan (who's not an antagonist). I could be wrong, if I am, please correct me. 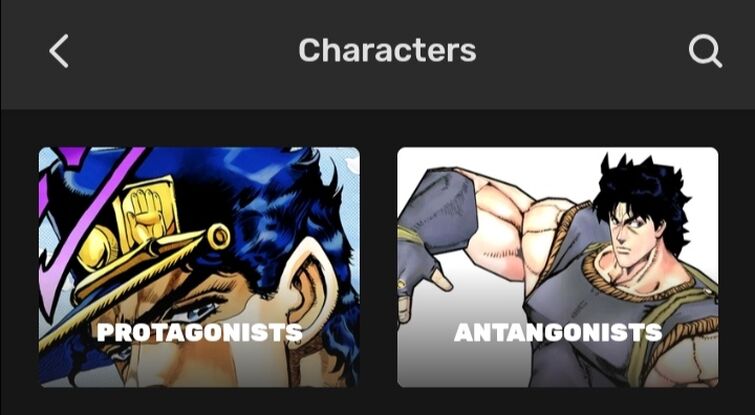 You can put any character from any part cannon or not. Mines Foo Fighters 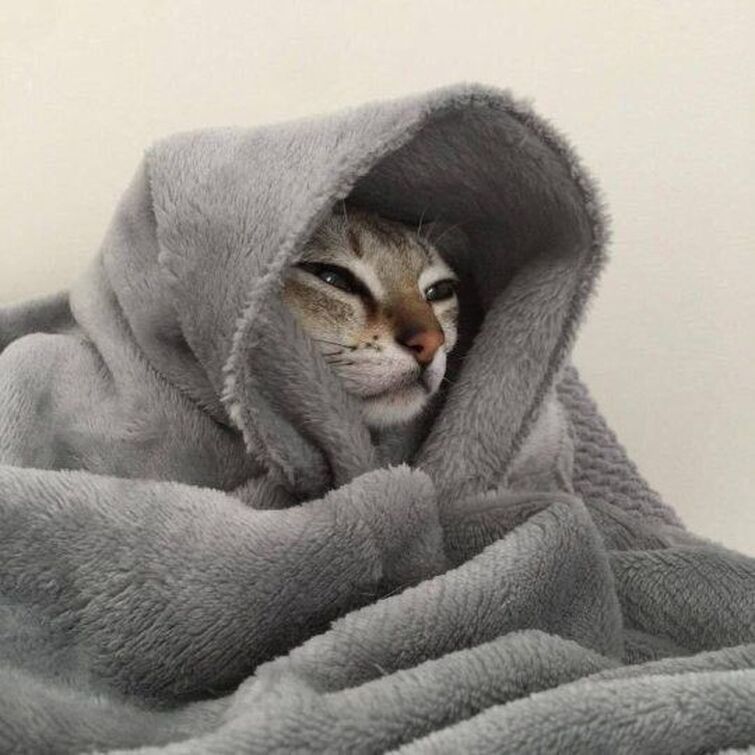 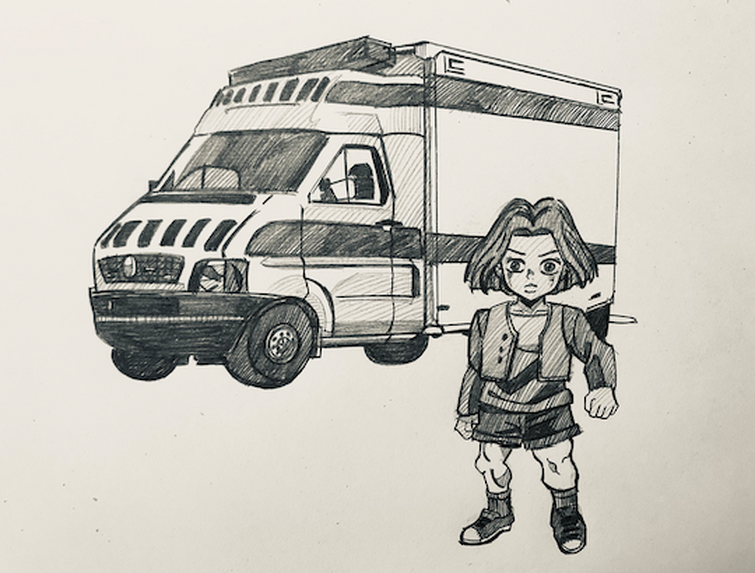 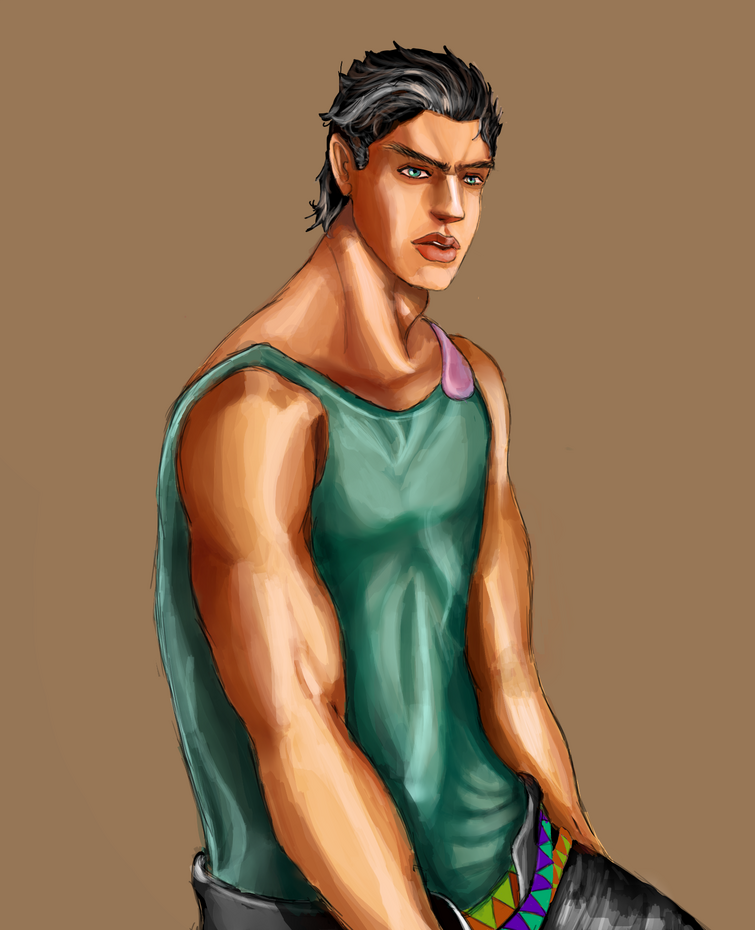 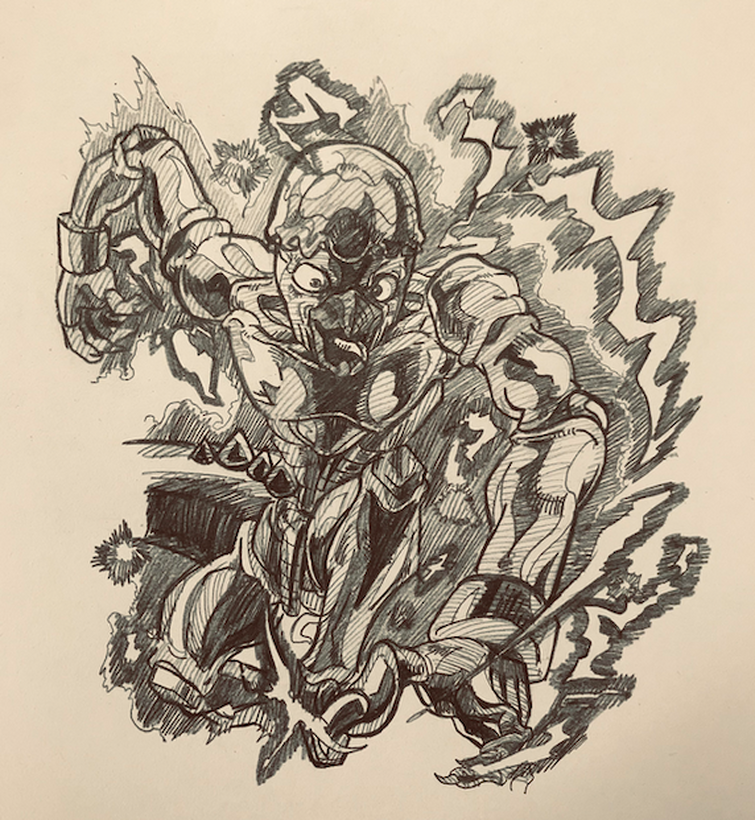 I'm assuming this is your profile picture correct? @Thebannanaworkshop 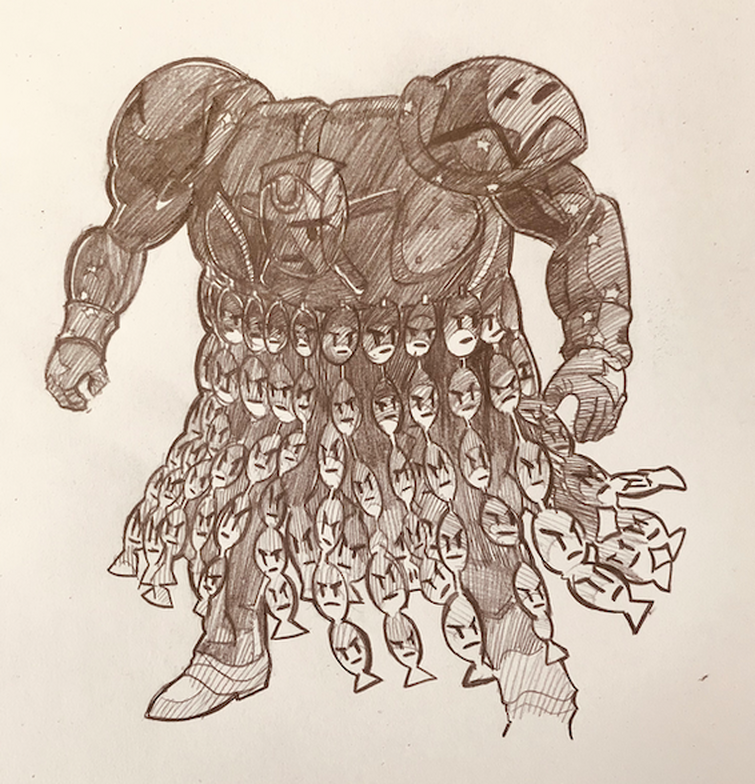 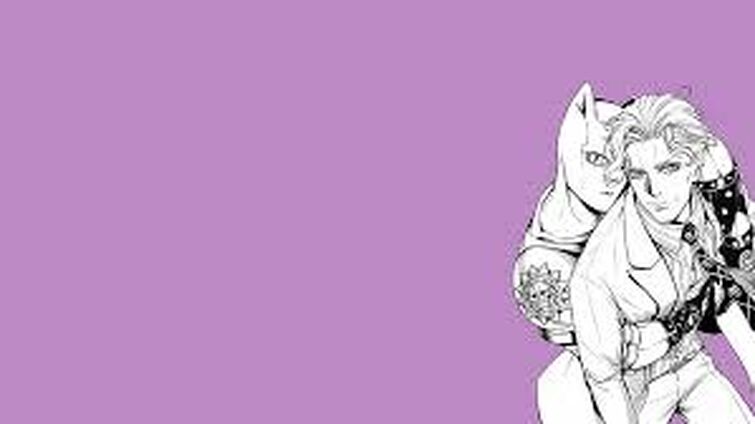 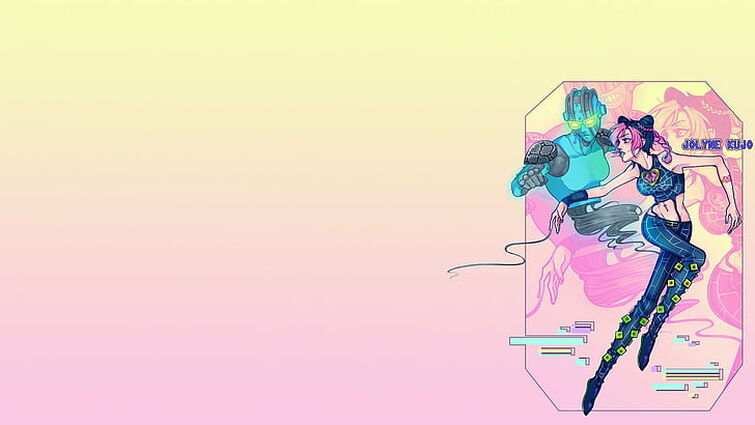 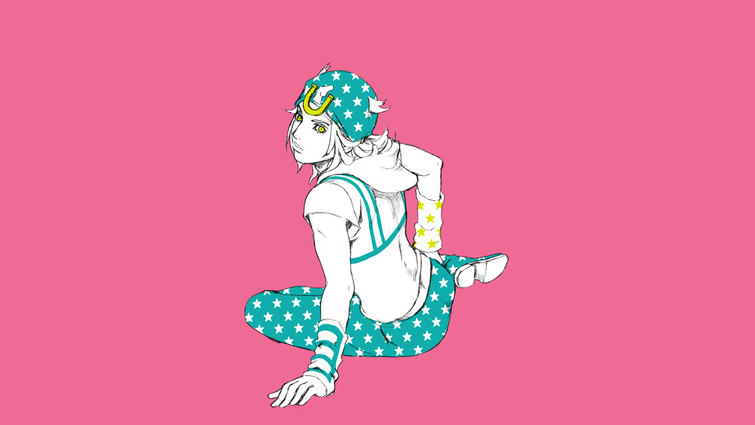 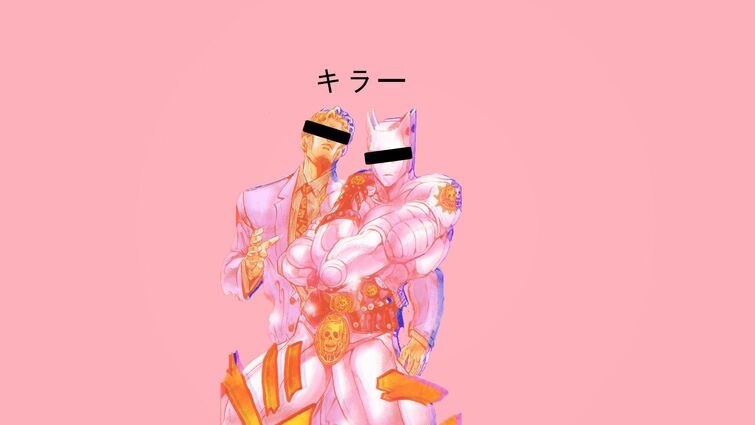 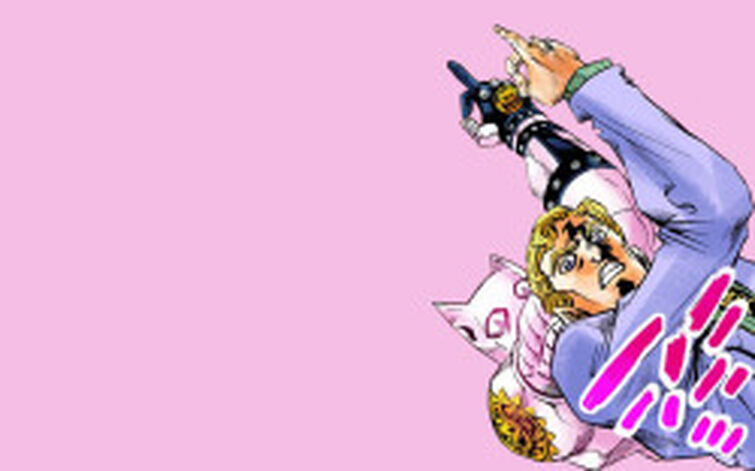 This is a pretty dumb idea, but maybe just maybe it'll spark some good debating...

(and please just debate the actual topic, don't be like "bruh, this post stoopid af", I know this is probably a terrible idea, but I am humbly requesting some legitimate thoughts on how it works or doesn't work)

Basically, as the majority of you must know already, GER works by resetting things to zero. So..... here's the big Rhino smooth brain moment: could GER revert the speed of time to zero?

Could GER essentially pull a timestop? If Giorno could do this, how would he go about actually doing it? If he couldn't, why not? (*and please give a more logical answer than "bruh, it's because he's never done it in part 5, so that means it's impossible" bulllshiiiii- this is for fun, of course it's not canon, I'm just curious to know people's thoughts on this. Is it too crazy a concept? Anyone actually think the 1130pm Rhino smooth brain actually conjuring up a good idea?)

(that's.... that's pretty much it... thought it would make for an interesting topic, let's see how things go...)

Here we go again, but I'll make this one shorter

Rapstar(Given to by stand arrow): Has the ability to reverse time without a limit

Action Reverse: Reverse the actions of someone's ability or action

Life Reverse: Reverse someone's life to any time and point

Rapstar Requiem(Given to by requiem arrow): Has the power to cancel anyone's ability

Action Reverse: Reverse the actions of someone's ability or action

Life Reverse: Reverse someone's life to any time and point

Stand Master: Anyone Claims it first

You're an embarrassment to society: RS engages in 4 page Kata and just shot from different camera angles. When finished RS will donut the opponent and leave them there to die

Because of the at first joke nature of this matchup, I will not be doing a poll so I can explain stuff.

The matchup is Maxwell from Scribblenauts against twoh.

Yes you heard that right. The guy from a children's game with the notebook that makes whatever he writes into reality against the world over heaven.

First things first to establish here. Maxwell has his notebook here, and we will assume from how he can just effortlessly use whatever weapon you give him with perfect ease in fame that he has combat experience so we can't just bring the fight down to who has experience over the other.

Second, this isn't a ridiculous match up because of the full scope of Maxwell's abilities. He can make anything, erase anything (dragging them into the trashcan just deletes them), literally kill God by just giving him the adjective of "dead" and can become immortal by giving himself the adjective "immortal" or deathless" and has time travelled by literally just writing time machine in his notebook and making one. Maxwell basically has reality manip like twoh, and that's why I wanted to see what you guys would think of this.

Maybe you'll all just brush it off as a stupid match up anyway, but I thought it was oddly interesting if you actually think about Maxwell's true abilities.

They really threw him in the trash. As of Stardust Crusaders, I wonder what happened to him 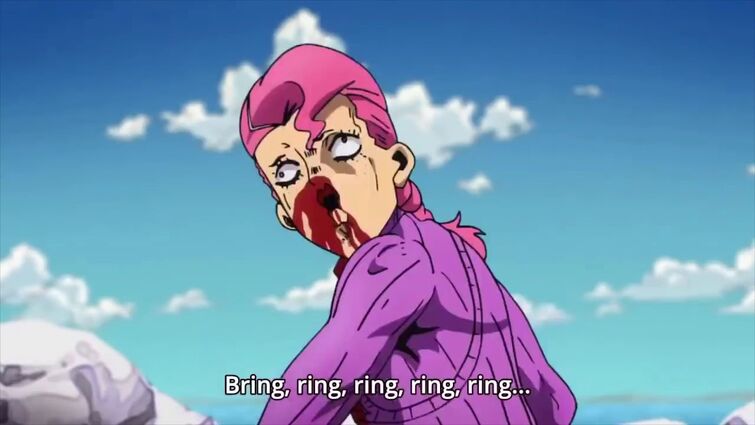 In celebration of e being alive again, imma do an AMA with Murataki again because im unorginal and uncreative. (I will draw/doodle the responses!!) 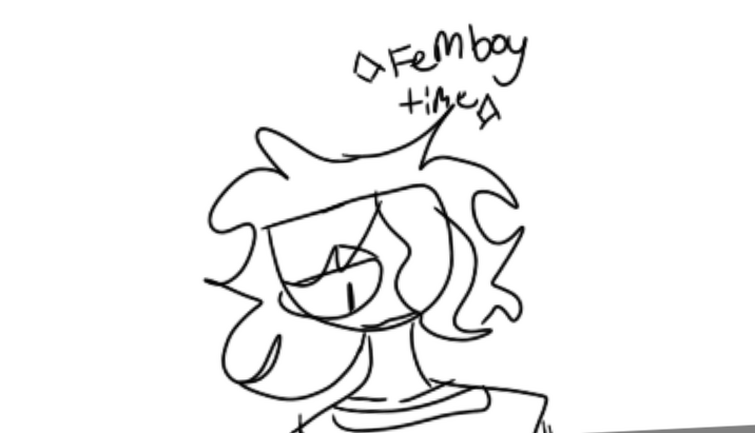 User named https://jojo.fandom.com/wiki/User:Thsuperninja270 Made a pointless page that already exists.

Jotaro and Giorno had met up again to discuss more topics. They had told each other of their battles, and Jotaro's battle, in particular, scared Giorno. He had definitely killed Diavolo. There was something very off about this conversation. He talked about a man named Pucci, and this seemed to ring a bell in Jotaro's head. That was the pastor that lived near Jolyne. He was glad she was safe, for now. Jotaro got up with Giorno and they started to walk down the street, discussing the bad feelings they were having. "Yare yare daze, I know something bad will happen to me today. I haven't talked to Polnareff, Avdol, or Kakyoin in a long time. I think we need their help. Something has been going on around here." Jotaro said with a deep, sharp tone. Just as Jotaro said that he turned around like a tornado, and released his Ora Barrage onto Kira. He wouldn't have a chance to activate Bites The Dust on Jotaro since he knew who he was. He picked him up by the collar and yelled, "WHAT ARE YOU DOING ALIVE? I KILLED YOU!" Kira laughed in his old tone that made Jotaro sick. This was really him. "I may not be able to activate Bites The Dust on you, but I can activate it on your friend here. You have no chance of winning."

Funny Valentine stepped out from behind Kira. He held up his revolver and shot a bullet straight into Jotaro's Shoulder. He immediately threw Kira into the wall face first and he landed with a splat. Kira got up like nothing happened, even though he was covered in blood. "Yare yare daze, you have a death wish. Your ass beating will be from yours truly." As Jotaro walked toward Valentine and Kira. "Hmph, It doesn't matter, I made that bullet that is in your arm a bomb." Just as Kira was about to pull the trigger, Jotaro screamed "STAR PLATINUM: ZA WARUDO!"

He ran to Kira and snapped his neck 3 times, just to make sure. He broke all of his bones and then punched a hole through his chest. He muttered to Kira "You may have survived my last attack, but I am a new type of monster. Time Resumes." Kira flew back and landed straight into a wall.

Funny Valentine laughed at Jotaro. He had faced Dio before, and Dio was even stronger than Jotaro. This is what Valentine thought, and he had underestimated Jotaro quite a bit. "I can pull Ten Thousand Kira's from different universes if I wanted to. Here's an example." Then, 1009 Kira's appeared out of thin air. but for some reason, there was an American flag on the floor. They all screamed, "THE FIRST BOMB!" as they touched the ground around them. They all went to pull the trigger as Jotaro was starting to lose consciousness. That bullet had hit an artery and had poison on it. Jotaro wasn't going down without a fight, and He exclaimed, "Giorno, Let's Go!" Giorno and Jotaro charged at the Kira's as they detonated the first bomb. As the bombs were about to blow up, they stopped. So did everybody else. Now Valentine was facing Giorno. This was Giorno's time to shine. Valentine tried to activate Love Train but was unable to.

This. Is. Requiem. What you were about to see was the truth. But you will never reach the truth that would have occurred. This Golden Experience Requiem's Power.

Valentine woke up in an examination room. He was at a morgue. Then He saw the examiner come into the room with a bone saw.

Stand Name: Your Own Shadow

Ever watch Ninjago? If so, then do you remember when Kai fought Lord Garmadon's shadow while trying to save Nya? When the Golden Weapons were actually useful? Yeah that.

Sorry for my idiotness, but is polnareff dead?