Incinerated to death via Karera Sakunami

The twin brothers are Rock Humans belonging to the Locacaca Organization as assassins. They hunt down Karera Sakunami for her knowledge concerning the Locacaca and clash with Josuke Higashikata. They are both Stand Users who wield their Schott Key No.1 and Schott Key No.2 in unison.

Besides the elder brother's damaged right hand, both are identical in appearance and attire. Sporting nearly shaven heads (with the younger brother having a long ponytail) with intricate sideburn designs and pierced ears, they wear long-sleeved decorated shirts and shorts which are reminiscent of typical footballer clothing. Their eyes are squinted to the point of appearing shut a majority of the time.

The deformity in the older brother's hand resembles the "equivalent exchange" aspect of the Locacaca, hinting at the possible motives of the two.

The pair share a duality described as harmonious with one another, being based on the Japanese concept of 'A-un', which explains the connected nature of opposites and their seemingly contradictory similarities.

Aside from that, the elder of the two brothers seems to be the one in charge, and was the only one to speak at first, but the younger brother speaks as well later on. The elder brother is the one who communicates with the policemen in place of his brother and the one who displays a Stand power;[1] his brother however would later reveal he also possessed a Stand - hidden in his soccer ball bag. The younger brother is more reserved, preferring to let his older brother do most of the talking. The younger brother also has a habit of kicking around his Stand's container and performing tricks with it, not unlike, and in the guise of, a soccer player.

The elder of the two brothers has utilized his Stand, Schott Key No. 1, on multiple occasions and it has become apparent that the function of his power is to shift objects touched with his left hand to the stub on his right; wherein he can manipulate the way it materializes for a variety of strategic advantages. The first example of this is shown during the confrontation between the brothers and a pair of police officers who attempt to ascertain the identity of the brothers. Objects transported in this fashion will seem to break down and crumble while the material reassembles on the other end.

The younger brother's Stand, Schott Key No. 2, possesses the ability to release potentially fatal toxic gas whenever the Stand's container is opened. Its effect induces a bloody cough when inhaled, and quickly corrodes skin that comes in contact with it. The gas can be transported by Schott Key No. 1 to give the elder brother a deadly technique in combat.

While similar to a human's, their bodies can presumably change into rock. Because of this, they do not need to sleep or rest. They can mimic rocks to the point that it makes them indistinguishable from them.

Norisuke theorizes that Yotsuyu's physiology requires him to have at least a small amount of skin respiration and in the absence of such his body structure will begin to break down due to it becoming less structurally stable than an ordinary human's. This could be a trait shared by other Rock humans, including the A. Phex Brothers.

The younger brother demonstrates versatile[1] and dynamic[1] control of his soccer ball common of experts, capable of moving it between his legs and head effortlessly and kicking it with enough force and power that it could be considered an attack of its own.

The A. Phex Brothers were born as nameless Rock Humans, and subsequently took their names from normal humans. At one point in their lives, they became assassins for the Locacaca Organization.

On August 19, 2011, the A. Phex Brothers were sent to assassinate Josefumi Kujo and Yoshikage Kira. Although they found the duo, Josefumi defeated the both of them and pummelled them down a cliff before he was buried alongside Kira. They were subsequently sent on Karera Sakunami's trail, chasing her for six months.

The pair are first observed performing tricks with a soccer ball in the streets of Morioh as Josuke and Karera walk on, to the amazement of the gathering crowd.

As Josuke and Karera walk away from the ATM, the brothers can be seen questioned by a pair of policemen as to the strange nature of their ball and what one officer perceives to be a rock held in the hand of the older brother. After he demonstrates his ability in subduing the policemen, dialogue exchanged between the two brothers suggests that they have been hunting Karera and are surprised she has lasted this long.

Searching the streets for people who have come into contact with Karera, they eventually run into her and Josuke when the pair are nearing Kira's apartment, and the younger brother acts as a distraction while the other grabs Karera from behind and uses his ability to transport the fuel in a car's tank all over her, proceeding to set her ablaze if not for the intervention of Josuke's Soft & Wet.

At the realization that Josuke appears to be a more pressing threat they decided to prioritize him as their target while allowing Karera to escape, more fixated on discovering the identity of the strange and powerful man who also has ties to the Locacaca fruits.

The two gang up on Josuke but Karera returns and sets both of them on fire. They die, as the upper halves of their bodies turn to stone and crumble away.

Using Soft and Wet, Josefumi uses a branch to attack the elder brother.

The first appearance of the A. Phex Brothers. 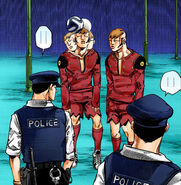 Both brothers standing together being questioned by police.

The elder brother's hand, assimilating a pair of handcuffs using his Stand.

The elder brother prepares to douse Karera in gasoline.

The demise of the twins.