The Stand has the shape of a toy fighter jet piloted by a very small pilot named Mr. Smith (スミスさん, Sumisu-san) inside.[1] The plane itself can be described as a propeller monoplane fighter in a tractor configuration (the propeller situated at the front), given features resembling eyes and a mouth. Its wheels are retracted under the fuselage, and its weaponry includes two machine guns under the wings and a single bomb attached under the fuselage.

Narancia has a unique method of recalling Aerosmith by spreading his arms horizontally and making the Stand land on them like a runway.

Aerosmith is a powerful battle-oriented Stand possessing not only a wide array of powerful weaponry to destroy its enemies but also boasts above-average nimbleness due to its nature, size, and good range. Moreover, its ability to detect carbon dioxide makes it a great scout and radar.

Aerosmith is equipped with small machine guns on its wings shooting tracer bullets with infinite ammunition[2] and a single bomb which it can drop on its enemies.

Despite their reduced size, the weapons are still deadly. The tracer bullets can set gasoline on fire[3] and shoot through a human body;[4] the bomb has the power of a grenade.[2] However, due to the Stand's poor precision, Narancia prefers to unleash Aerosmith's full arsenal with reckless abandon in a short period of time to compensate.[2] As a last resort, the propeller itself can be used as a blade to slice enemies.[5]

Aerosmith also has a carbon dioxide radar that Narancia can use to find an enemy's position through their breath when they exhale.[6]

While active, a small mechanical radar levitates near Narancia's face, specifically his right eye, allowing him to see the location and size of sources as circular blips on the radar.[6] This makes it ineffective when there is a big crowd or large fire, as it is unable to distinguish between sources,[6] though Narancia is capable of deducing the sources based on the behavior of an individual source. The heavier the carbon dioxide emission from a given source on the radar, the larger the blip will appear.[6] Narancia can also adjust the sensitivity of the radar in order to pick up sources on the level of small animals and even insects.[7] 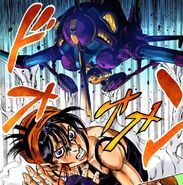 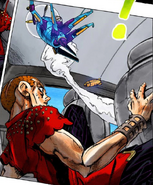 ..and explodes the car 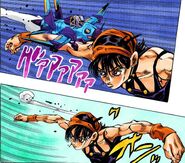 View of the radar screen 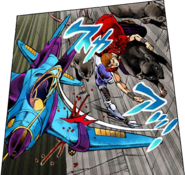 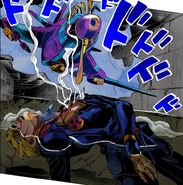 Aerosmith in the PV

Unleashing a hail of bullets at Formaggio

Aerosmith & Narancia in the ending credits for Part 5 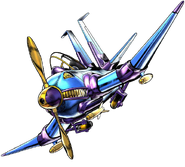 Aerosmith as it appears in All Star Battle

Aerosmith in Eyes of Heaven