He is a cowardly mercenary who repeatedly shows enjoyment in picking on those weaker than him. His Stand, Sethan, has the ability to rapidly reverse the age of those who come into contact with it. He is one of the Egypt 9 Glory Gods and attempts to assassinate Polnareff in Luxor, while Mariah battles Joseph and Avdol.

Alessi is a man of short stature and height, depicted as little more than a foot taller than an average child, and dwarfed by the normal-sized Jotaro and Polnareff. His biggest hallmark is his bizarre hairstyle, which resembles a dust mop with decorative beads hung underneath. He wears a loose-fitting dress shirt that conceals his weapons of choice: an over-sized hatchet (engraved with the word 'Ax') and a suppressed pistol.

Alessi is a sadistic yet cowardly man who will only fight those who are weaker than him. He takes extreme pleasure in taunting and humiliating his opponents before finishing them off, and will exploit any underhanded method to gain an unfair advantage.

Despite this cowardice, he has an odd sense of pride in his work and will go out of his way to take revenge on those who humiliate him, even if it leaves him vulnerable.

The mercenary takes odd leaps of "logic" to rationalize his sadism and creepiness, which he seems to acknowledge and deny at the same time (employing what could be considered doublethink), claiming that "people who always say that they are weird aren't actually weird... So I'm not weird."

His Stand Sethan is named after Set, the Egyptian God of Tornadoes and Storms. The fact that the Ancient Egyptians considered Set the embodiment of evil may have also played a role in the naming of the Stand of such a twisted and malicious personality.

Alessi's Stand is Sethan, with which he is able to turn back the age of his targets.

Alessi is hired by DIO to kill Jotaro Kujo and his friends. Alessi first appears bullying some children on the street, until he spots Polnareff alone. Sethan extends from Alessi like a shadow and catches Polnareff off guard, turning him and his Stand Silver Chariot into children.

Alessi also turns a woman who became Polnareff's friend into a fetus, and he warns Polnareff that unless he is defeated quickly the woman will wither and die. In his younger state, Polnareff doesn't remember Jotaro or how to properly use his Stand and is nearly killed, but still manages to outsmart and wound Alessi, causing him to flee just as Jotaro steps in.

The mercenary also manages to turn Jotaro into a child, confident in the fact Jotaro won't be able to summon his Stand in this state since he obtained it only recently. However, he is unaware that Jotaro was physically strong even as a child and so is caught off guard by several punches to the face and is knocked out cold.

Alessi, upon waking up, finds his Stand power was deactivated, with teenager Jotaro and adult Polnareff standing triumphantly before him. He is then subjected to a combined barrage from Silver Chariot and Star Platinum and "punched into oblivion", not being capable of fighting anymore.

Alessi is one of the bosses fought by the heroes during the game. Unlike in the original manga, Alessi works in concert with Oingo and Boingo to ambush the Joestars and their companions. The Oingo Boingo brothers lead the Joestar Group into a library (after taking Iggy and confiscating the group's equipment) in which the group scatters to search the different aisles until Jotaro and Polnareff find themselves alone. Alessi turns Joseph, Avdol and Kakyoin into children offscreen, forcing Jotaro and Polnareff to fight him in a two vs. one boss battle.

Alessi plays the same role he did in the manga during Story Mode. He is an assassin hired by DIO to destroy Jotaro Kujo and his companions. Very little is offered in terms of his backstory, so his motivations and the potential reward for helping DIO are a mystery.

During his storyline, he manages to defeat the protagonists, and he starts to believe that he is even more powerful than DIO himself. Alessi travels to DIO's mansion and kills Vanilla Ice and his vampire master. Alessi becomes the most powerful Stand Master in the world afterward and contemplates "who to torture next" in his ending.

Alessi is characterized as a comic-relief character (such as Dan from the Street Fighter series) with his ridiculous animations and over the top attacks, but is, in fact, a powerful character. His active Stand possesses incredible range and can be extended even further by holding the Summon button down while calling it out. Its weakness, however: Alessi will not be able to attack aerially with it active since Sethan is a shadow, and cannot leave the ground.

Alessi has two notable attacks, one of which uses his Stand Sethan to de-age his opponent. This is done by sending a 'wave' through Sethan while it is not Active, and reaching out and 'grabbing' with shadowy hands while Sethan is Active. His other attack allows Alessi to pull out his signature handgun and pelt his opponent with bullets from a distance, although it is aimed with a reticule that must be moved across the screen. Alessi is vulnerable during this time period.

Alessi possesses three super techniques. The first causes him to dash forward a short distance and subject his opponent to a flurry of hits from Sethan, ending in them being de-aged. The second causes Sethan to rise from the ground vertically, (unblockable to opponents in the air) and repeatedly hit the foe until they are turned into the child. The final technique is the 'Tandem' mechanic of the game, which allows certain characters to pay one super gauge to attack and move much faster for a brief period of time. This can be combined with Alessi's other special or super techniques for devastating combos.

Alessi picks on the weak 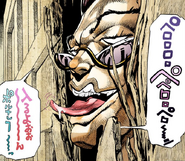 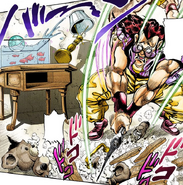 Alessi destroys a teddy bear in a panic

Alessi's first appearance in the anime

Alessi's portrait from Heritage for the Future

Alessi's sprite from Heritage for the Future