Anjuro is a hardened criminal made a Stand User by Keicho Nijimura whose presence prompts Jotaro Kujo to come to Morioh to arrest him. He then tries to attack the Higashikata Family and battles both Jotaro and Josuke Higashikata. His Stand is the water-based Aqua Necklace.

Angelo is a tall muscular man with short spiked hair, prominent facial features and a lack of eyebrows. Outside his prison attire in flashbacks, he's only ever seen wearing a milkman outfit consisting of a long sleeve shirt and overalls.

Angelo is a notorious criminal having seemingly no standards, with some even saying that he is cursed to be an evil man who doesn't care about other people's lives. Angelo is an extremely sadistic, vile, and murderous person who enjoys to see and cause suffering and pain. While he agrees with everything said about him, he doesn't feel the need to change and continues engaging in his crimes. At one point, after killing Ryohei Higashikata, he blames Josuke for his grandfather's death, saying Josuke didn't watch him so it was all his fault. Angelo also displays sexual depravity, guilty of raping three young boys and planning to rape Tomoko Higashikata. Jotaro describes his actions being "fouler then dog feces." He has disgust towards people who he believes are cocky and enjoys seeing these people in agony.

He is also quite vengeful, having developed a grudge against Ryohei for arresting him years ago, and against Josuke for foiling his robbery attempt.

After acquiring his Stand, Angelo is very confident as he can kill as many people at a safe distance. With Aqua Necklace being impervious to any type of damage, Angelo doesn't hesitate to taunt his opponents and mocks their actions against it futile. However, Angelo can be overconfident as his Stand was trapped in a rubber glove. When he attempted to take control of a boy, Angelo's cockiness drove Josuke to fuse him into a rock after insulting his hair.

Despite his impulse, he is highly intelligent, having an IQ of 160, which he demonstrated along with patience by waiting for it to rain before striking Jotaro and Josuke. He states when things go his way, he feels like laughing from the bottom of his heart. As such, he is virtually immoral and enjoys committing as many murders as possible while not being caught from the law. When Angelo finds himself at a disadvantage, he demonstrates hypocrisy and cowardice, saying that Josuke didn't have the right to judge him when Angelo himself did the exact same things.

Anjuro is able to control a water-bound Stand, Aqua Necklace, which has the ability to take control or kill anyone whose body it enters, shapeshift, and maintain itself even as vapor.

At the age of 12, Angelo was convicted for robbery and rape, and since then spent 20 years in prison. He became known as one of the biggest criminals in Japan, having been guilty of the rape and murder of three boys, on March 1994. He was eventually arrested by Ryohei Higashikata, and obtained his stand in prison from Keicho Nijimura using the Bow and Arrow. He was hanged in October, but was unable to die and escapes two weeks later after the failed execution. Once out of prison, Angelo goes on a killing spree, getting people to drink his watery stand before using it to cause their heads to be torn apart from within, as well as possessing people's bodies to commit crimes.

Angelo was detected by Hermit Purple as a man representing danger to Josuke Higashikata. Angelo met Josuke after his plan to use an ordinary man to commit a robbery was foiled by Josuke. As an act of vengeance against Josuke and Ryohei, Angelo tricked and killed Ryohei, planning to do the same to Josuke before assaulting his mother. Angelo waited until a rainy day came to get an advantage over Jotaro and Josuke in Josuke's home.

He was eventually defeated and smashed to pieces by Crazy Diamond's fists into a rock. Josuke then restored him and the rock at the same time, fusing them. Angelo then tried to take a child as a hostage with his stand, but insulted Josuke's hair and, as a result, Josuke fused him even further with the rock, effectively turning Angelo into a hideous statue that becomes a historical landmark for Morioh. Josuke eventually waved to Angelo when passing by the rock, a habit Koichi Hirose also developed to imitate Josuke.

Angelo makes his game debut as a playable character in Diamond Records. 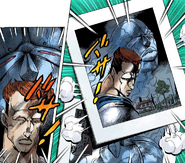 Angelo and his Stand in a photo taken by Joseph Joestar's Hermit Purple.

Surviving his own execution by hanging

Angelo being shot with the arrow by Keicho Nijimura

Angelo with his Stand

Angelo biting a dog's snout off

Angelo drinks while waiting for Josuke to trigger his Stand. 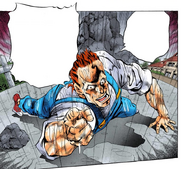 Begging Josuke to spare his life

Beaten to a pulp by Crazy Diamond 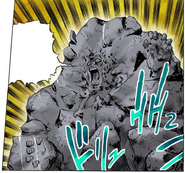 Angelo, sealed for eternity in the "Angelo Rock"

Angelo murdering a man with a baseball bat

Angelo, about to dismember and murder a little boy

Angelo in a prison cell

Surviving his own execution by hanging

A picture of Angelo's Stand taken by Joseph's Hermit Purple

Multiple spirit photos of Angelo and his Stand

Angelo with his Stand

Pissed over his assassination attempt failing

Biting a dog's nose off

Angelo drinks while waiting for Josuke to trigger his Stand

Angelo has complete control of the Higashikata residence

Begging Josuke to spare his life

Beaten to a pulp by Crazy Diamond

Angelo, sealed for eternity in the "Angelo Rock" 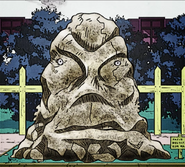 Angelo eating the dinner of the Yamashita couple

Angelo getting shot with the Bow And Arrow

Angelo waiting in the park to take over someone

Angelo deciding to go after Josuke for getting in his way

Angelo getting Keicho Nijimura's attention in the street from a bridge

Angelo and Keicho eating dinner at a restaurant

Angelo looking through the sewer grate for Josuke

Angelo ordering Aqua Necklace to murder Josuke and his family

Angelo being tossed around as Josuke shakes the bottle with Aqua Necklace in it.

Angelo being tossed around rougher, after killing Ryohei Higashikata

Angelo pleading with Josuke not to hurt him

Angelo turned into a rock

Angelo as an Area Boss in Diamond Records

Anjuro Rock in one of the loading screens, DR