To travel the world

Anne (アン, An) is a minor character appearing in Stardust Crusaders.

Joining the Joestar Group before departing for Singapore, she somehow follows them from there to Pakistan and appears regularly alongside the main characters during the first part of Stardust Crusaders.

Anne is a young girl of around 11~12 years old, of average height and thin to medium build.

She has long, dark hair, a small, slightly-upturned nose, and freckles. She commonly wears overalls and a light shirt.

Anne first appears disguised as a boy wearing a cap, but soon after being found, her identity as a girl is revealed and the cap is discarded.

Upon meeting the Joestar Group, Anne presents herself as a temperamental and irreverent brat, becoming annoyed when Jotaro felt her chest to confirm she was female. On one occasion, she challenged all five of the members of the Joestar group with only a switchblade when they were considering what to do with her, pretending to be a cold-blooded killer. She appears to be rather talkative, as she bothered the Crusaders with her chatter during a car ride in the Wheel of Fortune Arc.

Anne is rather brave, but reckless, as she gathered the courage to flee from home and travel the world and opted at one point to swim from a boat to a shore barely visible over the horizon. However, the bravado doesn't prepare her for the Stands she meets. As foretold by Jotaro, Anne still only drags the Joestar Group down to the point of risking their own lives, especially in the battle against ZZ, where she screams for help instead of using the time she had to run.

Anne fancies herself a beautiful girl, even though the only one to have shown interest in her was Forever. When she tagged along Jotaro and his friends, she tried to catch their attention by commenting on her growth, to everyone's disinterest. She eventually develops a crush on Jotaro, appreciating his looks and attitude. The anime expands on that crush by showing her happy to see Jotaro greeting her one last time.

Though of limited or no particular abilities, Anne is shown to be a confident swimmer (believing she could reach shores swimming from the middle of the ocean) as well as being very confident in her ability to use her small knife (though her actual skills with the knife are unknown).

Anne wanted to travel the world, believing that posing as a boy would make it easier. She believed that once she had grown enough she would need to start wearing a bra, making it difficult to pose as a guy at that point. She then runs away, claiming that the age she is now is the best to travel. Her intentions for doing so has been hinted as due to her crush on Jotaro and "having nothing else better to do".

Anne first appears as a stowaway on the cruise ship that the Impostor Captain Tennille had abducted. Posing as a boy, she is found by one of the sailors who threatens to turn her to police when they reach shore. She then lies, saying she is going to Hong Kong to meet her father. She realizes that she was going to be imprisoned and jumps off the ship in an attempt to swim to shore by herself and remain safe. When close to being attacked by a shark (later killed by Dark Blue Moon) she is begrudgingly saved by Jotaro Kujo. It is then that her identity as a girl is revealed and she threatens to cut one of the crew members when the Joestar Group suspects her for a Stand user.

She is then taken hostage by the Impostor Captain Tennille when his real identity is revealed but is saved by Noriaki Kakyoin when Jotaro fails to do so and gets dragged into the water. She starts to develop a crush towards Jotaro and his attitude, Thinking he is cool.

During the battle, the ship is destroyed and she accompanies the group into Forever's Stand-bound ship, Strength. Forever, acting like a human being lusts for Anne and corners her in the middle of her shower soon after brutally killing all the sailors. She is saved by Jotaro again and watches their battle.

When the group reaches Singapore, the girl refuses to separate from them, saying she will meet her father in 5 days. Under protests at first, they agree to let her accompany them until her father arrives because she was too poor to live on her own. Later on, Rubber Soul poses as Kakyoin and approaches Jotaro and Anne; she eventually notices his strange behavior. Rubber Soul's real identity is revealed and he is defeated soon after.

On their way to India they leave her behind in Singapore to meet her father, but Jean Pierre Polnareff comes to the conclusion that it was a lie and she is probably an orphan. He then claims that it feels lonely without her presence. She is revealed, however, to have sneaked on the train and is following them again.

In the midst of ZZ's attack, Anne ends up tripping while running with the others. Instead of getting up and running, she stays on the floor and screams for help, at which Jotaro complies to do so, but not before scolding her for her attitude. The group eventually tells Anne they are going to give her money, plane tickets and send her back to Hong Kong as soon as possible. Despite her protests, she is convinced by Mr. Joseph Joestar himself to stop running away and return to Hong Kong while explaining Holy Kujo's situation. She immediately does so, but not before cheering for Jotaro to save his mother's life.

Much like the story, Anne appears during the events: Dark Blue Moon, Strength and Wheel of Fortune on SUPER STORY mode (console-exclusive episodes).

On both Dark Blue Moon and Wheel of Fortune, she only appears during cutscenes. Anne makes a major appearance during the mini-game from the Strength events, as the player must shoot Forever the Orangutan. Sometimes Anne appears during the mini-game, and if she is hit the player loses some health. She also appears after the event is cleared, on the chapter ending's cutscene.

Heritage for the Future marks the first and only time Anne appears in a game. 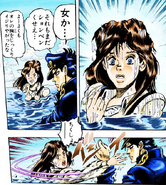 Calling Jotaro a pervert for touching her chest.

Challenging the Crusaders with a knife.

Anne disguised as a boy.

Anne caught by a sailor.

Dark Blue Moon holding her as a hostage.

Anne in the shower.

Anne in Heritage for the Future