DU Episode 17 - Rohan Kishibe's Adventure
Arnold (アーノルド, Ānorudo) is Reimi Sugimoto's pet dog featured in Diamond is Unbreakable. Much like Reimi, Arnold is a ghost that remains by her side as she bides her time in the alley.

As a guard dog (seemingly of the Labrador Retriever breed), Arnold is big and strong, but friendly to strangers (as he didn't attack Rohan and Koichi). Loyal to his master, he remained by her side even in the afterlife. He has a huge gash across his throat that is dripping with blood; the same fatal wound that lead to his death.

Arnold was Reimi's guard dog. One night, Yoshikage Kira invaded their house and slashed his throat. Picking up the dog's dead body, Kira hanged him on the clothes hook in the wall, his neck almost cut off. His blood remained dripping for more than 10 minutes before anyone noticed his death. Living as ghosts bound within a ghost alley, Reimi and Arnold await the day they can find someone to hear their story and report Kira to the police before more girls are killed.

Reimi and Arnold finally find people with a supernatural ability who can see them: Koichi Hirose and Rohan Kishibe. After hearing the story, they agree to help after learning the killer is still alive, and they warn the Stand users of Morioh. Arnold remains by Reimi's side as she bides her time in the alley.

After Kira's death, his soul is transported to the ghost alley. When Kira attacks Reimi, Arnold defends her by biting Kira's arm off, causing him to look back and be dragged into the afterlife by hundreds of hands. Finally at peace, the ghost alley disappears, and both Arnold and Reimi ascend to Heaven.

Arnold alongside his mistress, Reimi.

Arnold ascends to Heaven with Reimi, finally at peace. 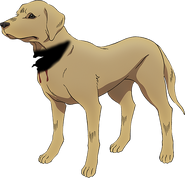