Blood loss from fatal gunshot wound through the neck

SBR Chapter 59 - A Dream of Gettysburg

He is one of the last agents sent by President Valentine to retrieve the missing pieces of the Saint's Corpse. He is a Stand User, possessing Civil War, which grants him the ability to summon corporeal representations of figures from both his, and his enemies', pasts. He ambushes Hot Pants, Gyro and Johnny in Gettysburg, Pensylvania.

Axl appears to be a middle-aged man, if not slightly on the young side; of above-average height and medium build. A black mask-like mark (either facepaint or a tattoo) covers the top of his face around his eyes and with hooking tribal marks extending down to his cheeks; save for a scattering of dots.

Over a light, drooping rag, he wears a thick, round military helmet covered by a net. He wears a thick wide-necked top, bearing four dark rectangular patches between his shoulders and elbows on his long sleeves. His chest is overlaid with a V-shaped piece from which hang layers of squares; and he wears dark, knee-high combat boots.

Axl carries a lot of pain due to his experiences during the American Civil War and sees himself as a sinner. He harbours a large amount of crippling guilt and actively attempts to pass that guilt to others through his Stand to numb his pain, this shows that he can be quite selfish, attempting to hurt others using his own mistakes. Whether in the present day his alcoholism continues is unclear, but even so, before his tragic actions during the war he had already suffered with depression from prolonged loneliness and resorted to alcohol. Despite his toxic nature he appears to have an element of fairness to him, as during his battle with Gyro and Johnny, he explained to Gyro honestly how to stop the effects of his Stand, Civil War. He appears to be very loyal to Valentine, likely due to his time as a soldier and previous experience serving a cause greater than himself. He says that when he was a soldier, he was given the opportunity to sacrifice his life for the sake of his company and a whole town of innocent civilians, he refrained, showing he is prone to cowardice.

Axl's Stand, Civil War, is a manifestation of pure guilt. Axl uses this guilt to attack others and is keen to abandon said guilt by passing it on using his Stand. To active this abilly with his Stand, Axl must effectively end his own life, it is possible that this requirement represents his desire to sacrifice himself now that he has the foresight to the pain he feels for not doing so in his past. Civil War's second ability is to expose enemies to their own guilt over their actions in the past, which is another example of him wanting to share in guilt.

Axl's Stand is Civil War, constituting a system in which is he able to transfer or unload sin and guilt via the attacks of hostile, ghostly representations of people and objects he or his targets harbor as having wronged or unfairly discarded. His Stand's ability is very powerful due to Axl's own large amount of personal guilt, stemming from being solely responsible for the death of most, if not all, his company and an entire town of civilians during the American Civil War. His actions would also pave the way for the following string of defeats on his side leading up to the end of the war, thereby amplifying his guilt futher.

During his youth, Axl RO wanted to be a musician, but was drafted into the army in 1863 during the American Civil War, likely for the Confederate side. He was stationed in a tree to be a lookout in a remote town. Having no one to talk to, and being completely alone, Axl resorted to alcohol to relieve his despair. He had only one job; to light a lamp in order to warn the soldiers nearby of any incoming enemy troops. However, it just so happened that during the one day he overslept as a result of his incessant drinking, enemy forces moved upon the town. When he woke from his hidden position, enemy forces were already beneath him, and he chose not to light his lamp, knowing that doing so would reveal his location and surely result in his death. So, he silently sat there and finished his drink, watching on as the town was left completely unaware and soon burned to ashes. The people of the town and his fellow soldiers posted there were massacred, marking the beginning of continued losses for Axl's side in the war.

Ever since, Axl has always been looking for ways to repent his sins, seemingly gaining his Stand naturally from the intense guilt and grief he suffers with. Sometime later, he was hired by Funny Valentine, and eventually ordered to kill Johnny, Gyro and Hot Pants to retrieve the majority of the remaining corpse parts from them.

Johnny ended up shooting Axl, and after being killed, he was resurrected by his Stand and claimed he was purified from his sins. Axl's sins were transferred to Johnny in the form of all the soldiers who died during that enemy attack long ago. Johnny was able to dodge the zombies by using his Stand power but was stabbed in the neck and killed by Axl. Having been killed, Johnny was revived and Axl's sins returned to him.

With few options left, Axl RO attempts to attack Johnny directly with an axe, but is suddenly shot fatally through the neck from behind. His attacker is revealed to be none other than President Funny Valentine, his own employer. Valentine explains that due to him technically saving Johnny from Axl, the attack was justified and in self defence, therefore Civil War's effect could not activate against him. The President admits that shooting Axl was nothing more than a precaution to secure the possession of the Saint's Corpse by himself, implying that he had been more than ready to do so beforehand. Valentine quickly hauls the majority of the Corspe back out of a nearby doorway, ordering the barley alive Axl to hold Johnny off while he makes his escape. However, the assassin does not act, whether from his injuries being too great or out of anger for the President's betrayal is unclear. Axl instead lays on the church floor and finishes bleeding out, muttering Valentine's name one last time before passing away for good. 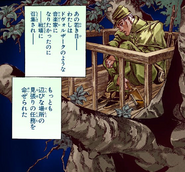 Axl as an alcoholic soldier

Emerging from the shadows

Retrieved from "https://jojo.fandom.com/wiki/Axl_RO?oldid=383649"
Community content is available under CC-BY-SA unless otherwise noted.