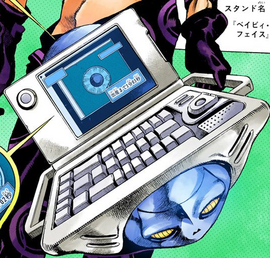 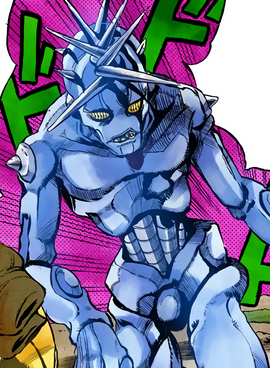 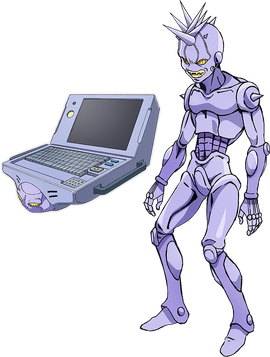 Baby Face is a highly unique Stand, functioning as a computer that can generate a secondary, sentient Stand capable of development. While in the manga, Melone refers to the secondary Stand as Baby Face too, he calls it a Junior (ジュニア, Junia) in the anime adaptation.

Baby Face primarily takes the form of a laptop equipped with a trackball, in which there is a hole where Melone can insert a small bottle of sampled DNA. From the bottom of the computer protrudes a large face, and occasionally limbs. It is notable that Baby Face can be seen by ordinary people.

The junior it generates takes the form of a humanoid with no noteworthy features save for the crest of spikes on its head. Its midsection is composed of several cables attaching the two halves of its body. It begins with the proportions of a child, resembling an evil version of Echoes ACT3,[2] but it can experience "growth spurts" that give it a more mature appearance.

Baby Face and its spawn are both presented as being light blue in the colored manga and lavender in the anime adaptation. While Baby Face itself is not shown in the PS2 game, the junior is shown as being white with lime green spikes.

While Baby Face itself has no personality to speak of, the junior it generates is an independent Stand with separate sentience from its user. Since it is born with intellect but no knowledge, it requires proper education to ensure positive growth; otherwise, it will become disobedient and uncontrollable.[3]

The junior's personality is based on its "mother" and shaped by Melone's "education" as it develops. The one used against Bruno Bucciarati's group had a hotheaded "mother" and demonstrated such personality traits.

Baby Face's base entity is an automatic Stand with little combat ability, therefore it isn't suited for direct confrontation. Its strength resides in its ability to create secondary Stands for Melone to sic on a target. It is laborious to set up, but inherently very safe as a trade-off.

Through its computer Stand, Baby Face has the ability to generate a secondary Stand that will fight in its place.[3] By researching a suitable subject through the pseudoscience of examining a woman's characteristics, Melone gathers information and predicts the future junior's predispositions. Some traits that are identified include the woman's age and health (used to determine the physical strength of their "child"), their blood type and horoscope (which determine their "compatibility" with Melone's target; a poor compatibility leads to an aggressive "child"), and their preferred sex positions from the Kama Sutra (the relevance of this is unknown). If the data predicts a child suitable for his purposes, Melone uses Baby Face on the woman and implants her with Baby Face's child through undisclosed, though objectively nonsexual means.[4] Though the child is progenated through undisclosed means, it is stated that the process holds absolutely no similarities to human reproduction: upon waking up post-Stand encounter, Baby Face's victim shows no signs of being sexually assaulted or giving traditional birth, hinting that the process is not invasive, at least not on a physical level.[2] Babyface also lacks any sort of genitals, and blood is used for the process, not semen, confirming that the process is in fact non-sexual. The function of Babyface seems to resemble that of a parasite more than human reproduction.

The development is fast, taking three minutes for Babyface's spawn to fully develop into a new junior[4] that then appears near the host. The child also appears to develop within or around the mother's head, approximately towards the back. This is hinted at when Baby Face's speech seemingly originates from that point, and urine trickles down the target woman's neck when it relieves itself.

If Melone possesses a sample of a target's blood, he can incorporate it into the junior by placing the sample in a niche beside Baby Face's keyboard. The resulting junior will be able to sense the target's location and track them no matter the distance.[4]

In addition to generating homunculi, Baby Face can function much like a regular computer, capable of holding and interacting with the data gathered by Melone.[4] The computer Stand also maintains contact with the junior, as if Melone was having an online discussion with the junior's spirit. A webcam and microphone allow Melone to show the junior images and converse with it orally.[3] It also monitors the junior's status, allowing Melone to watch its growth.[5]

The secondary Stand (or junior) that Baby Face creates is an independent, long-range, power-type Stand that acts as a surrogate fighter for Melone. It is powerful by default, can develop further depending on the progenitor, and its demise doesn't affect Melone, making it useful as a proxy assassin.[6] On the other hand, because of its independence, it can disobey its creator under duress. Its creation is also a lengthy and intensive process, as Melone must find a suitable "mother" and train the resulting junior in order to carry out its mission. As a unique mix of human and Stand, the junior can be seen by anyone[6] and is vulnerable to mundane things most Stands are immune to, like burning.[5]

By generating a square-shaped vacuum, the secondary Stand is capable of breaking matter apart into cubes while keeping lifeforms alive.[3]

It can forcefully divide anything it touches into cubes, or merely extract a single cubic part of the target.[7][8]

Upon dicing something, Baby Face is capable of rearranging and reconstituting the structure of said objects into anything it desires; for instance, it separated Trish's body into cubes and rearranged them into a table. It can even apply its powers to itself, reproducing the appearance of anything and blending in with the environment.[7][8] The junior can thus hide inside an object, go into any adjacent object, or even fly about as a mass of cubes in order to evade attacks.[9]

Although cubed people typically stay alive despite their condition,[10] Baby Face can weaponize its ability by removing key parts of the body like the throat.[8] It can also absorb the cubes for nourishment, although it is only seen using this on its "mother" to hasten its growth.[3]

The junior starts as a small baby able to hide inside someone's hair. Over a short period of time, it will grow both physically and mentally into a fully aged adult.[3] Aside from developing physically, it will grow as a Stand itself. While most autonomous Stands, such as Killer Queen's Sheer Heart Attack, lack precision or the ability to allow their users a sense of awareness to their current condition and status, Baby Face is able to assimilate information witnessed or heard. Through that learning and Melone's counsel,[8] the Stand will become more powerful and efficient in combat. It can also acquire other skills separate from fighting, such as driving a motorcycle.[9]

On the other hand, it is free-spirited and may go berserk[6] and disobey Melone's orders, especially if its "mother" was strong-willed. For better or for worse, the Stand will then follow its instinct alone when battling an enemy.[5] 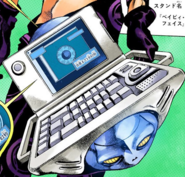 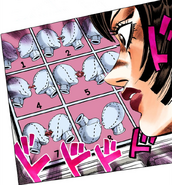 The types of kissing shown on Baby Face's screen 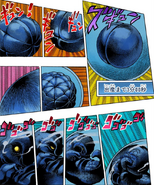 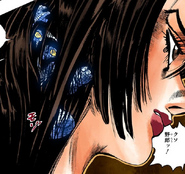 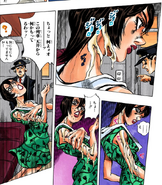 Baby Face urinating on its "mother"

The woman targeted by Melone, disintegrates by Baby Face's ability 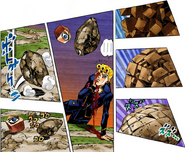 Baby Face restructures itself into a stone and Giorno's eye part

Baby Face fused with a wall

Baby Face caught by a vine created by Gold Experience 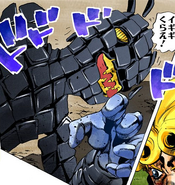 Wounded by a piranha Giorno's right hand changed into

Baby Face fused with a motorcycle

Displaying its newfound knowledge of animals to Melone

Displaying the many uses of children's toys

The homunculus hiding in its "mother"'s hair

The homunculus begins to grow hungry

Using its ability to disintegrate its mother

Using its ability to capture Trish

Using its ability to capture Bucciarati

Using its ability to carve out Giorno's throat

The homunculus about to escape with Coco Jumbo on a motorbike

Disintegrating itself to evade Giorno's attack

Announcing its "victory" to Giorno

Gold Experience turns its users arm into a piranha, which bursts out of Baby Face's back 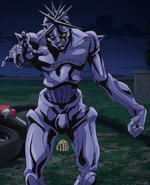 After the growth spurt due to its anger

Baby Face and its user in Uragirimono no Requiem