Bad Company appears as a group of 60 Patchwork soldiers, an uncertain amount of Green Berets (most likely part of the 60 soldiers), 4 helicopters modeled after the Boeing AH-64 ApacheW, and 7 tanks modeled after the M1 AbramsW, all armed to the teeth and dressed similar to American G.I.s. Much like the figuresW they are based on, all the units in Bad Company are scaled down to size and resemble something like sentient toys.

Most media portray Bad Company as little soldiers, with skin that appears metallic, in green uniforms, as well as green vehicles.

Bad Company is the first colony-type Stand to be featured in the series and as such, it is composed of many weaker individual units whose power can add up when combined. Damage to one individual is not transferred to the User, though it is unknown if killing all the soldiers, helicopters, and tanks would kill Keicho too.

Bad Company is a small, yet imposing force in combat as it's capable of deploying a great amount of firepower, while also using subtle military tactics. Commanded by the meticulous Keicho, who uses the confined space of his house to trap Josuke, Bad Company proves to be highly dangerous.

Bad Company is a battalion of miniature soldiers and military vehicles and is equipped as such. Each of Bad Company's soldiers is armed with an M16 assault rifles, a parachute, and combat knives.[2] The Green Berets have the same equipment as the soldiers, but with the addition of a rappelling rope which allows them to climb objects or descend onto targets from above.[3] The helicopters are armed with machine guns and missiles,[2] and the tanks have scaled-down shells.[2] Bad Company is also equipped with land mines.[4]

Despite their reduced size relative to an actual army, the weapons of Bad Company are still dangerous. The infantry's miniature M16s are able to puncture through human skin, creating small but deep bullet holes;[2] a land mine's blast is enough to severely wound a leg and a pair of missiles from one of the helicopters was enough to disable Crazy Diamond's arm.[4]

Bad Company is most effective when all of its units fire at once. Defensively speaking, the disciplined fire of the infantry, which Keicho describes as a "wall of steel," can shoot down any projectile as long as they have the time to see it coming. Offensively, the combined fire of the infantry and all the vehicles creates an onslaught of projectiles able to blast away a wall.[3] However, this method commits all units to offense and leaves Keicho defenseless to attacks. Thus, the army was not able to shoot down a missile Josuke sent back to Keicho as they were focused on firing on the former.[4]

In the live action adaptation of Diamond is Unbreakable, Bad Company is given another caveat in its ability. When Keicho gives Bad Company a command, the army will only work towards carrying out that specific command, and it cannot be changed once ordered.

Bad Company's soldiers in a group. 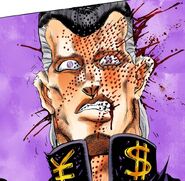 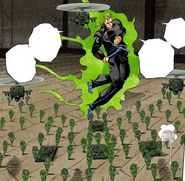 Bad Company being directed by Keicho.

Bad Company's soldiers in a group.

A "Green Beret" stabbing Koichi with a tactical knife.

Closeup of one of Bad Company's helicopters.

Bad Company soldiers use a helicopter in search of Josuke.