Bastet (バステト女神, Basuteto-joshin) is the Stand of Mariah, featured in Stardust Crusaders.

Bastet roughly resembles an American outlet with a cable visible under it that can be placed anywhere.

It represents the Egyptian Goddess BastetW.

In Heritage for the Future, Bastet can be seen as an ethereal humanoid feline bust when Mariah blocks or performs certain actions, similar to the Anubis Stand's appearance.

Bastet is designed to turn people's curiosity against them. It has no fighting ability whatsoever and no use besides trapping victims, forcing Mariah to wait until her victims die alone. On the other hand, it is suited for assassination because unless Mariah exposes herself, there is no way to catch on to her.

When a person touches the outlet, they will be shocked[1] and become a magnet that attracts nearby metallic objects.[2]

Additionally, more than one person can be placed under the same "magnetic curse". Multiple people under the same magnetic attraction will even be attracted towards each other.[4]

A drawback of this Stand's ability is that Mariah must maintain a certain distance from her target or the magnetism will wear off.[5] Another drawback is that the magnetism can be used against the user, as both Joseph Joestar and Muhammad Avdol were able to trap her via a pincer attack, and use the weight of the objects latched onto them to crush Mariah.

Bastet in the colored manga

Joseph attracts all metal objects to himself 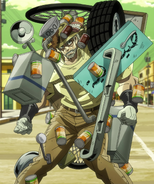 Bastet in Heritage for the Future 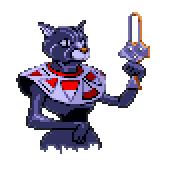 Bastet's portrait in Heritage for the Future 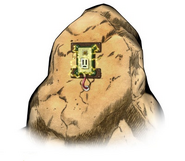 Bastet as seen in Eyes of Heaven