For the Anime adaption, see JoJo's Bizarre Adventure: The Animation.

Battle Tendency (戦闘潮流, Sentō Chōryū) is the second story arc of JoJo's Bizarre Adventure, serialized in Weekly Shōnen Jump from November 1987 to March 1989. The arc is preceded by Phantom Blood and spans a total of 69 chapters.

Taking place in 1938-39, the story follows the misadventures of Joseph Joestar (a.k.a. JoJo), grandson of Jonathan, as he masters his innate Ripple abilities in order to combat hostile, ancient super-beings named the Pillar Men, creators of the Stone Mask that plot to become the ultimate lifeforms.

Along the way, Joseph trains with other warriors of the Ripple.

Battle Tendency consists of 69 chapters, compiled into Volume 5 to 12 of the Jump Comics trade paperbacks (TankōbonW). Chapter titles often change between the original publication in Weekly Shōnen Jump magazine and the paperback graphic novels, so both are included below (left for volume, right for the magazine). 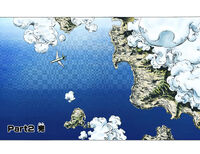