Boingo (ボインゴ) is a minor antagonist featured in Stardust Crusaders.

Boingo is a young Stand User. His Stand is Tohth. As part of the Egypt 9 Glory Gods, he attempts to assassinate the Joestar Group in Egypt alongside his older brother Oingo and later Hol Horse.

Boingo is a young child of ordinary build, but his characteristics include an unusually large mouth and a large afro held together by a topless cap, leaving a few stray hair locks. His attire consists of a bright shirt and trousers over which he wears shorts and a jacket, plus a coat and simple shoes.

Boingo is very shy and content to take a supporting role in his partnership, using his Stand to guide his brother Oingo and then Hol Horse and then hide somewhere to observe. This passivity is also explained by the facts that Boingo is still a little child and that Tohth, being a mere book, is completely useless in a fight. Because of his shyness, Boingo is only comfortable around Oingo with whom he is close. After his encounters with the Joestar Group, Boingo seemingly learns from the experience and decides to become braver but, after Iggy attacks him, Boingo is then stated to have reverted back to his shyness. His timidity also causes him to stutter noticeably.

Despite his meekness, Boingo has great faith in his Stand Tohth, stating regularly that its predictions are always correct, however twisted they may be.

As one of DIO's servitors, Boingo demonstrates hints of evilness. For example, he grins and even awkwardly laughs when Tohth predicts that the heroes may die, and has no problem with mugging a man for his money. During his last appearance, Boingo expresses a wish to use his power for good so that people will love them more but this development is cut short when Iggy attacks him.

Boingo and his brother share a very close relationship, working as partners and relying on each other. Tohth's narration states for instance that Boingo feels lonely after being separated from Oingo. Moreover, Boingo accepts to partner up with Hol Horse to avenge his retired brother.

Tohth is an Artificial Non-Humanoid Stand that takes the form of a manga.

The book, titled, Oingo Boingo Brothers Adventure, will show predictions of the future. When an image appears, the predicition(s) then become fate, and are destined to come to fruition. However, no body, not even Boingo, can control the Image projected onto Tohth.

Boingo is first seen reading from the comic book Tohth and then meets a friendly comic artist who offers to buy it from him. However, Oingo maintains that the book is not for sale and threatens the comic artist to stay away from Boingo. He then reads the comic and decides to wait four hours for the next bus to avoid the accident Tohth predicted. The brothers then look into Tohth for the next prediction and realize that they are meant to poison the Joestar group's tea. Boingo stays in the shadows and witnesses Oingo's preparations to fulfill the prophecy. At the same time, Jean Pierre Polnareff lets a cigarette fall, which points to their restaurant.

Initially, the group decides to order tea, but a suspicious Joseph Joestar decides to order the unopened coke instead. This seems to prevent Oingo from poisoning the drink at first, but an angry customer reacts to the warm coke he was served, causing the Joestar group to order the tea that Oingo successfully poisons. However, right as the group is about to drink their tea, Iggy eats another customer's cake and causes the Joestar group to abandon their tea to take care of Iggy and leave the shop, which makes Oingo and Boingo angry. Eventually, following Tohth's prophecy, Oingo punches a nerdy-looking stranger and frightens him into dropping his wallet, giving the two money and temporarily pacifying them for their failure.

Following Tohth's next prediction, Oingo then tries to make Jotaro eat a bomb that looked like an orange. However, Joseph and Polnareff return and Oingo is forced to disguise himself as Jotaro in order to prevent them from attacking him. The disguise backfires and Oingo is dragged into the same car where he placed the bomb. Boingo becomes shocked after finding out the true meaning of Tohth's prophecy, that Oingo is the one who will fall victim to the bomb with Jotaro's face, and mentally begs for his brother to transform back so that their intended interpretation of the prophecy will come true. Regardless, Oingo accidentally steps on the bomb he set up, causing it to blow up and split his face in two. Boingo then arrives and resolves to defeat the Joestar group on his own, causing Oingo to become proud of his younger brother's growth. However, the man Oingo assaulted earlier returns with other thugs, who beat up the two brothers and send them to the hospital. Meanwhile, the real Jotaro returns from visiting the hospital, and, happening to be thirsty, picks out an orange to eat.

After exiting the hospital, Boingo teams up with Hol Horse to avenge his brother (albeit only after Hol Horse had to resort to kidnapping Boingo). Boingo, hiding under a crate for the majority of Hol Horse's assisted assault, demonstrates the extent of Tohth's power by showing its next prediction: that Hol Horse would kick a woman and the woman will be thankful and give him money. Hol Horse is skeptical, but this is proven true when he sees a woman walking past him and, driven by the possibility of the prediction being true, runs and kicks the woman in the back, and finds out he killed a deadly scorpion on the woman's back, and is paid for saving her life.

Boingo now has Hol Horse's full confidence and directs Horse to guide his bullets through a series of pipes. However, Hol Horse's watch was off by a few minutes when directed to fire at noon, and the bullets loop around and pierce through the depicted holes in the comic book's pages to hit him instead. Afterward, Boingo contemplates using his powers to better the lives of others and kicks aside his hiding crate, but the crate accidentally hits Iggy and Boingo becomes assaulted by the dog and becomes even more introverted than before. Tohth then says that, if it was that easy to change their ways, there wouldn't be bad people in the world.

Oingo and Boingo are reduced to a supporting role in the game, and they don't use their respective Stands at all. Since Boingo doesn't appear as an enemy, he no longer forms a partnership with Hol Horse.

Boingo's Stand, Tohth, appears as the main menu character for the Gallery Mode, which contains every character ending (available once the player beats Arcade Mode with that character), mini-games, special modes (such as Taro card reading) and mini-boss battles (such as Death 13 and N'Doul).

Boingo is also playable via Alessi's transformation move on the "Hol Horse with Boingo" character, as Boingo assumes Hol's place on the match for a small period of time. However, Boingo doesn't attack the opponent, as Hol Horse does that for him, hiding under the box in the background, by shooting the enemy.

If the Hol Horse with Boingo pair lose, then the former will chase Boingo and kick him around in a fit of rage. 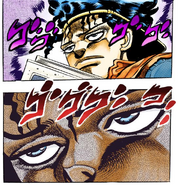 Boingo determined to get revenge for his brother 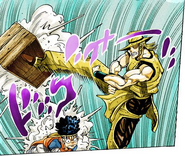 Hiding under a crate 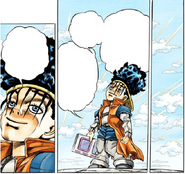 Boingo decides to turn over a new leaf and become good

Boingo attacked by Iggy, being his second and final retire

Boingo with his older brother, Oingo

Hiding under a crate

Boingo determined to get revenge for his brother

Boingo explains how to kill Jotaro

Boingo decides to turn over a new leaf and become good

Hol Horse & Boingo's portrait from Heritage for the Future

Boingo's sprite animation in Heritage for the Future 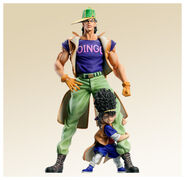