The Bow and Arrow

The Bow and Arrow (弓と矢, Yumi to Ya) (more specifically the Arrow (矢, Ya)) is a powerful item introduced early in Diamond is Unbreakable.

In Part 4, it becomes a major plot-driving force for its role as the source of many new Stand users; and it is revealed that its influence extends back to Stardust Crusaders.

Some of the Arrows or fragments of Arrow-heads also bear influence on the events of Vento Aureo and Stone Ocean; where further previous influence is detailed.

Approximately 50,000 years ago, a meteorite crash-landed on Earth around an underpopulated region of what is now known as Cape YorkW, GreenlandW. It is theorized that the meteorite sought out Earth through the will of its many strong spirits, rather than striking the planet by chance.

In 1978, a mineral excavation team uncovered an unknown virus within the rocks of the surrounding area and determined that it had been lying dormant inside the meteorite that hit Earth long ago. Despite extensive research, government doctors were unable to determine the alien virus' purpose outside the total elimination of human life. Akin to the theory of evolution, it was discovered that certain people possessed a quality that would enable them to survive when exposed to the virus, as well as grant them supernatural abilities, known as Stands.[1]

Several hundred years before the discovery of the virus, a man who wished to acquire the power of the gods took the rocks and fashioned them into Arrowheads. The Arrows allowed the wielder to unlock Stand abilities in those who had the potential to awaken one, essentially acting as the aforementioned trigger.

These Arrowheads had since been lost to time until 1986, when an Egyptian ruins investigation team, among whom was a young Diavolo, uncovered six of the arrowheads from underneath the Egyptian desert.

The Arrowheads were eventually stolen by Diavolo, who later sold five of them to Enya the Hag, believing he only needed one. Over time, the six Arrows were eventually distributed between various people, among them were Keicho Nijimura, Yoshihiro Kira, and Jean Pierre Polnareff.[2]

When a living creature is pierced by one of the Arrows, it will catalyze and awaken the individual’s dormant Stand.

The reason the Arrows can awaken Stand abilities is because the meteorite the Arrows were made from was host to an alien virus. The virus is a merciless one, with most people who contract it dying. However, a small number of people possess an abstract trait that allows them to survive, and as if to reward this trait, the individual's Stand is manifested.

This process has been described as being similar to natural selectionW, the evolutionary process in which some creatures better adapt to their circumstances than others and thus survive more easily.

However, if the target lacks sufficient spiritual strength, they will die if the wound is fatal. On the other hand, the Arrows normally only seek out (and pierce) those who can handle the strain to begin with.

When someone who is already a Stand user is pierced by the Arrow, such as the case with Yoshikage Kira, the Stand in question gains a new ability. It should be noted, however, that in the only known example of this, the Arrow has had to move by itself and pierce the Stand user willingly. Though it always seem that when pierced again by an arrow the user gains a new ability.

If the Arrow pierces or cuts the Stand itself instead of the user,[3] the Stand completely changes form and its powers become drastically greater than usual. In the two instances where this form was achieved, Requiem was added to the end of the Stand's name.

Gold Experience has been pierced twice by Arrows but only once did it evolve into a Requiem Stand; why this phenomenon happens and how it works is unexplained. One theory is that only the arrowhead with the beetle figure can create a Requiem Stand, as it has been made with higher content of the meteorite.

When someone is pierced with an Arrow, the effects can spread down the bloodline to other family members, awakening their Stands as well.

This effect is generally without exception, as the Arrow that pierced Jonathan Joestar's body, which had been taken over by Dio, awakened Stands in the rest of the Joestar family, with some of them not having the necessary spiritual strength and suffering from the strain (such as Holy Kujo and Josuke Higashikata at the time).

A family member without the spiritual strength to control a Stand will be slowly overwhelmed by it, putting them in a condition similar to suffering a severe illness, as it happened with Holy Kujo and Josuke. In this case, they would only have fifty days to live.

The only known way to prevent weak-willed family members from dying is to kill the one who was actually pierced by the Arrow. It is currently unknown if this is always the case, as the only known occurrence was when the malicious DIO was pierced by the Arrow, and the suffering of Holy and Josuke could have simply been caused by the connection between them opening a channel for DIO’s malice.

Other physical effects of piercing

In certain cases, such as with Ken Oyanagi and Stray Cat, with neither of them being exposed to regeneration or regenerative abilities, the wound caused by the Arrow will heal and leave a hole about the size of an average coin.

It is possible to break an Arrow and render it ineffective. This is largely implied to be related to the insect-like carving on the flat face of an Arrow, which, if intact, will be usable.

It can even retain its effects and seek out potential Stand users in the form of an amulet that Jotaro gave to Jolyne, as long as the insect carving on its face is intact and it is able to pierce its target.

Six Arrows have been revealed to date. Following their theft from an archaeological site in Egypt by Diavolo in 1986, five of the six were sold to Enya the Hag. Their subsequent uses and fates are outlined below:

The whereabouts of the remaining two Arrows sold to Enya are unknown.[8] However, there are several instances in the series where an unidentified Arrow appears:

Chain of events as described in Part 5 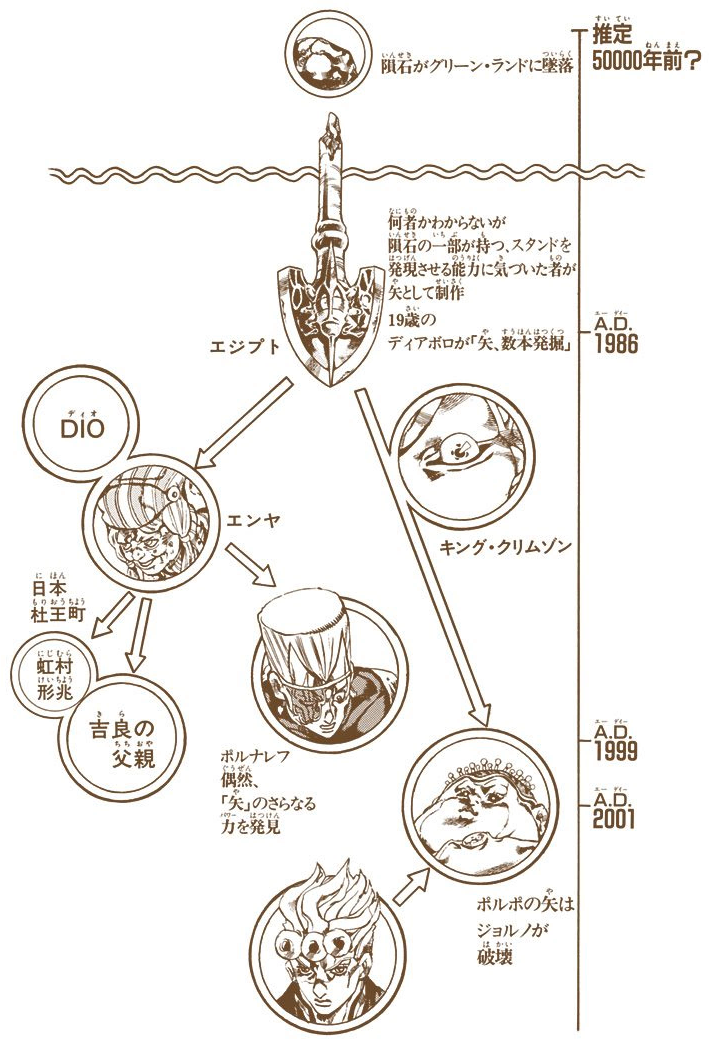 People shot with the Bow & Arrow

A similar case happens in the alternate universe, in a desert along the trail of the Steel Ball Run.

In this case, a meteorite crashes into the desert and forms a mobile formation of land known as the "Devil's Palm" that would change location every time and was feared by the natives near the area.

As was the case with the Arrow, it was rumored that the "Devil's Palm" sought out future Stand users, and like the Arrow, imposed a heavy affliction upon them from which the person would survive and obtain a Stand.

In JoJolion, an unexplained phenomenon causes several people to acquire a Stand after being bitten by something, only leaving a bite mark.

Yoshikage Kira being pierced by the Arrow

Giorno Giovanna piercing his Gold Experience with the Arrow 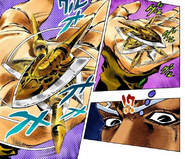 from I Want You

The Arrow inside Black Sabbath's mouth

Beetle design arrow in an anime

The Arrow Heads in anime

Keicho's arrow, as seen in the film.