Boy II Man is a muscular humanoid spirit clad in riveted armor with a pointed helmet resembling those worn by medieval knights. It lacks a lower body, instead having a cloud-like sphere at the bottom of the stand. The Stand always manifests itself coming out of the hole in Ken's cheek, made by the Bow and Arrow.

According to JOJOVELLER, its design is heavily inspired by one of Mitsuteru YokoyamaW's manga.

Boy II Man is a Stand centered around the game of rock-paper-scissors and is surprisingly threatening because of its ability to steal someone's energy through a simple game. It can also be used in basic combat as seen when Boy II Man picked up Shizuka Joestar.

Boy II Man's power is to steal the energy of an opponent whenever Ken beats them in a game of Rock Paper ScissorsW[2] (RPS).

If Ken proposes to play a game of RPS and the opponent formally accepts, Boy II Man sets up a best-three-out-of-five game of RPS with the following rules:

When Ken wins a round, Boy II Man appears to take away one third of the opponent's Stand power.[3] For instance, it literally tears away a third of Heaven's Door body and absorbs it inside the hole on Ken's cheek. Rohan is unharmed by the energy theft, but the corresponding body part begins to tire[4] and falls under the control of Ken who can move it as he wants.[2]

Moreover, Ken also begins to acquire the same power as the Stand it is stealing. It allows him to undo one of Rohan's commands and resume his game.[2] If Ken wins three times, Yoshihiro claims that he will gain the power of the stolen Stand forever and be free to use it in conjunction with Boy II Man.[4]

Boy II Man possesses an inherent weakness in that people are allowed to cheat during the game, enabling Rohan to regain his Heaven's Door during his first gain by using the invisible Shizuka to force Ken's scissors hand into a rock hand.[5] Additionally, the effectivness of the Stand is dependent on Ken's luck and skill at RPS, which is regularly shown to be quite low. 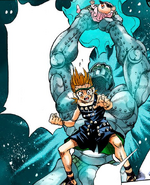 Absorbing the abilities of Heaven's Door from Rohan.