C-Moon is the evolved form of Whitesnake and the predecessor to Made in Heaven.

C-Moon is a humanoid Stand. As a result of the Green Baby fusing with Pucci and his Stand, Whitesnake, it bears similarities to both, giving its appearance a sense of fusion between the two.

Its face is skeletal, bearing elements of the Green Baby's appearance: Completely red eyes with thick, spiked eyelashes, and vein-like textures and patterns on its face. It has Whitesnake's striped Guanine/Δdenine/Cytosine/Thymine pattern on its hips, chest, and on the top and crown of its head. Its head, shoulders, arms and legs bear short, arrow-shaped (↑) vestiges, with the top of its head faintly similar to Whitesnake's crown. The back and sides of its head along with a belt incorporating a long, arrow-tipped tail possess a fur-like texture. On a thin waist, it has overt abdominal musculature, and is generally believed to have inherited Whitesnake's figure.

All media featuring C-Moon portray it as white and green.

C-Moon shows little learning/developmental potential, requiring direct instructions from Pucci in order to act meaningfully; but, shown considering them, it appears to possess a degree of independent intelligence. By its fighting ability it seems to demonstrate knowledge, although its actions may only be the necessary result of its instructions and environment.

C-Moon is an extremely powerful and dangerous Stand. Not only does its power over gravity greatly impede its enemies and guarantee that any of its strikes can prove fatal, but it possesses the agility, speed and strength to fight toe-to-toe with powerful close-range Stands like Stone Free.[1][2]

C-Moon is remote-controlled, and thus can be manipulated from a certain distance by Pucci. The closer Pucci is, the better his control, but he must expose himself to do so.[3]

Within a radius of 3 kilometers around Pucci, the gravity shifts so that people and objects are repelled from Pucci. Thus, any unfixed object will fall away from him as if the Earth was a giant cliff[4] but then return to normal once they fall sufficiently away from Pucci.[5] Likewise, anyone positioned above Pucci will fall upward.[6] C-Moon itself is unaffected and can freely move around Pucci.[4] By default, Pucci's gravity always makes him attracted to the surface below his feet, making him able to walk on any surface, even vertical ones.[4] However, he can toggle the gravity shift so he can levitate freely instead.[7]

C-Moon can also dramatically modify the gravitational force acting upon an object by touching it with its fists, which is expressed by that object turning inside-out.[1][4] Anything its fists even graze will be affected, down to individual hairs. If C-Moon touches the same object or area twice, the effects are reversed, enabling Jolyne to partially withstand its blows.[1]

This power grants C-Moon great destructive potential: a blow to the chest is usually fatal as the heart turns inside out, and blood flow is reversed, depriving the brain of oxygen.[6] Although C-Moon mainly uses this ability to deal fatal blows, it can use the turning inside out of objects to try trapping its opponents[1] or violently snap small objects like tiles to project them into enemies.[3] Pucci himself can partially turn himself inside out without harm to evade attacks.[8]

Jolyne Cujoh has developed a unique counter to C-Moon's power. Exploiting her ability to turn herself into strings, Jolyne can transform the parts of her body into Moebius strips, object with only one surface and impossible to turn inside out, thus cancelling the harm C-Moon does to her.[9]

C-Moon appears to have an altered version of the ability Pucci's future stand Made in Heaven possesses. As opposed to accelerating time on a universal scale and not affecting living creatures, C-Moon's acceleration is extremely localized and affects any object, living or otherwise, that physically touch or come within extreme proximity to Pucci. Examples of this include rapidly growing a woman's fingernails, accelerating the growth of one half of a baby's body into an adult, and causing broken chicken's eggs to spontaneously grow premature living chicks. This ability, due to being in the transitory stage between Whitesnake and Made in Heaven, appears to be out of Pucci's control, activating without warning or conscious activation by Pucci.

Cover, SO Chapter 146
(With Enrico Pucci) 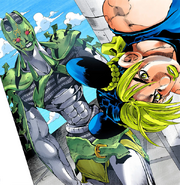 After fusing with the Green Baby, Whitesnake appears behind Jolyne as a new Stand: C-Moon

Evolving into Made in Heaven 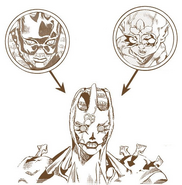 C-Moon as it appears in All Star Battle

C-Moon as it appears in Eyes of Heaven