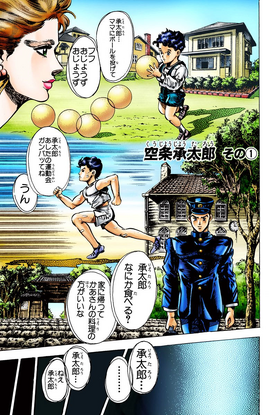 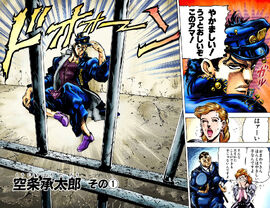 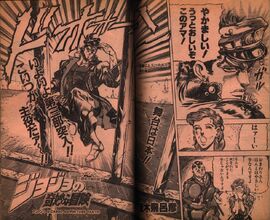 SC Episode 1
Episode 1 (OVA)
Jotaro Kujo, Part 1 (空条承太郎 その①, Kūjō Jōtarō Sono 1), originally A Man Possessed by an Evil Spirit (悪霊にとりつかれた男, Akuryō ni Toritsukareta Otoko) in the WSJ release, is the first chapter of Stardust Crusaders and the one hundred fourteenth chapter of the JoJo's Bizarre Adventure manga. Additionally, unlike in the Tankobon release, this chapter is included in the JoJonium release of Stardust Crusaders rather than in the last volume of the previous part, Battle Tendency.

In the year 1987, 17-year-old delinquent Jotaro Kujo, grandson of Joseph Joestar, and son of Holy Kujo, is detained after beating up three armed men and a trained boxer. Despite Holy's insistence, he refuses to leave his cell, claiming that he is possessed by an evil spirit. His prison mates confirm, desperate to get out of the shared cell.

The guards notice Jotaro somehow drinking a can of beer and reading Weekly Shōnen Jump while listening to the radio within his cell, confused as to how he retrieved all those items. Jotaro claims the evil spirit brings things to him.

To prove he isn't lying, he demonstrates by taking one of the prison guards' gun and shoots himself in the head, but the bullet is stopped by a mysterious floating arm that only he and his mother can see. Holy mentions that his grandfather, Joseph Joestar, also possessed similar powers.

Near the Canary Islands in 1983, four years earlier, off the coast of Africa, a group of fishermen uncover an extremely heavy 100-year-old coffin from the water, believing it to be a large treasure chest.

Jotaro Kujo when he was a child