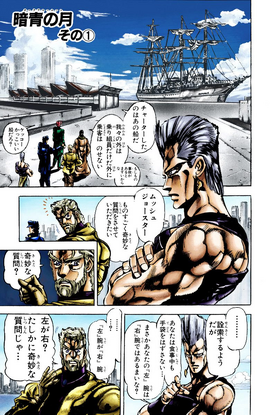 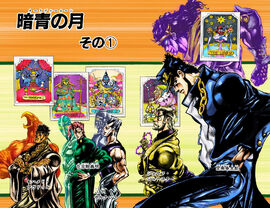 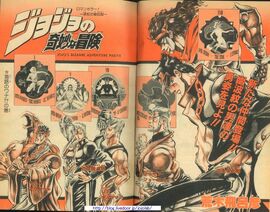 Jean Pierre Polnareff confronts Joseph Joestar about his hand, asking him if his left hand is actually a right hand. Confused by the unusual question, Joseph reveals it is a prosthetic hand, as he lost his real one in a battle a long time ago. Polnareff explains his question by telling the group how his sister was raped and killed by a man with two right hands. Polnareff informs the group that DIO approached him with the promise of helping him in finding the killer in exchange for the Joestar group's deaths and notably showed him visions of the murderer in a crystal ball. He decides to join the group in hopes of finding the killer, as DIO was also searching for him and probably hired him as his henchman.

After telling his story, Polnareff suddenly changes his attitude and approaches some girls taking pictures. This surprises the group and they comment that his emotions seem to change very quickly.

The group boards the ship to Singapore and decide to relax, as everyone on board has had their background checked to make sure no one was a Stand user. Kakyoin and Jotaro continue wearing their student uniforms, even though it is very hot.

One of the sailors finds a child who had sneaked on board, and plans to turn him in to the police at the end of the trip. However, the child bites the sailor's arm and jumps into the ocean, planning to swim to shore. Joseph becomes worried about the mysterious passenger's presence, but Jotaro tells him to forget the kid and leave him in the ocean. The sailor warns them about sharks in the area, and Jotaro jumps in the water to save the child, punching the approaching shark away with Star Platinum. Jotaro grabs the kid and tries to drag him to shore, but accidentally touches his chest and discovers "he" is actually a girl, who calls him a pervert for grabbing her chest. Meanwhile, the shark is cut in two by a mysterious aquatic creature.