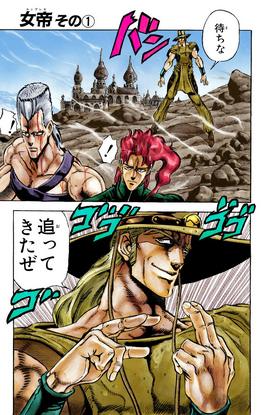 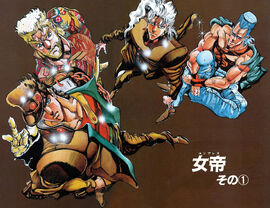 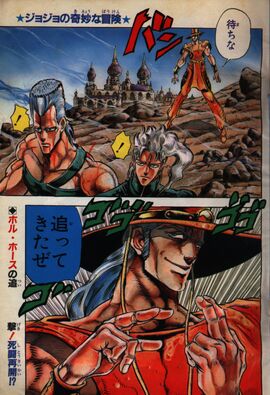 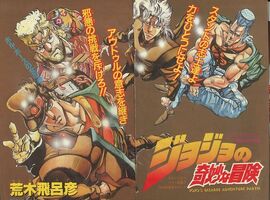 Hol Horse finally catches up to Polnareff and Kakyoin, confident that they are ignoring him out of fear. After Hol Horse insists on fighting them and starts shooting at glass with Emperor to help Hanged Man's attack, Polnareff tells him that J. Geil is already dead, his body a short distance from them. As Polnareff prepares to fight him, Hol Horse runs away under the pretext of checking his partner's body, but is stopped in his tracks by Jotaro and Joseph, who have just arrived after burying Avdol.

Surrounded on all sides, Hol Horse watches helplessly as Polnareff sentences him to death and goes for the killing blow. He is stopped by Nena, allowing Hol Horse to escape. Polnareff tries to run after him even when the woman continues to hold his leg, and, in the confusion, gets hurt to the point of bleeding as he tries to drag her along the ground. Joseph tells Polnareff to just forget the enemy, who doesn't want to fight anymore, and treats the woman's wound. The group leaves, unaware that a drop of Nena's blood has fallen on Joseph's arm. A talking wart grows from it, and eats a fly when it comes near. As the group continues their journey, Nena reveals another talking wart on her tongue, which makes an ominous noise.