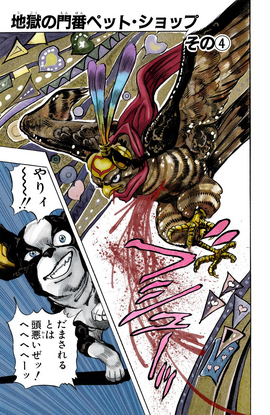 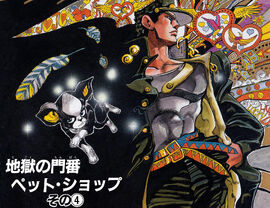 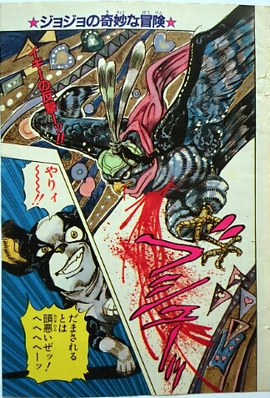 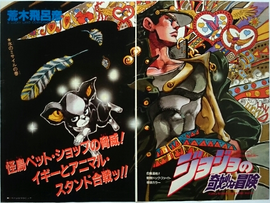 The Gatekeeper of Hell, Pet Shop, Part 4 (地獄の門番ペット・ショップ その④, Jigoku no Monban Petto Shoppu Sono 4), originally The Ice Missile (氷のミサイル, Kōri no Misairu) in the WSJ release, is the one hundred twelfth chapter of Stardust Crusaders and the two hundred twenty-fifth chapter of the JoJo's Bizarre Adventure manga.

In the Cairo sewers, Iggy successfully performs a sneak attack on Pet Shop and deals a devastating blow to the bird. Iggy tells Pet Shop that he has no care for him or DIO, and is willing to let him go. However, Iggy has damaged Pet Shop's pride, and the Stand-wielding hawk will not accept the idea of Iggy escaping with his life. He summons his Stand, Horus, and stops his bleeding with ice, as well as blocking the exit. Iggy runs away, but every exit he finds gets frozen shut by Horus' ice missiles. As Iggy runs, one of his paws gets frozen to the ground. In order to escape, Iggy amputates his paw and flees into the sewer water.

In the city streets, the Joestar Group contemplates why the beggar they hired is taking so long. Avdol states that he might have found the mansion, and was taken out by its guardian. At the bottom of the Nile, Iggy hides in a sand dome made from The Fool. He believes himself to be safe, however, Pet Shop dives into the water never giving up the hunt for his prey.