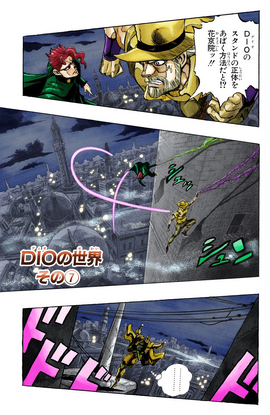 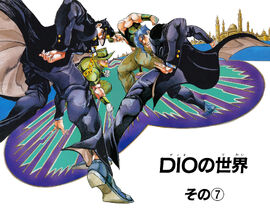 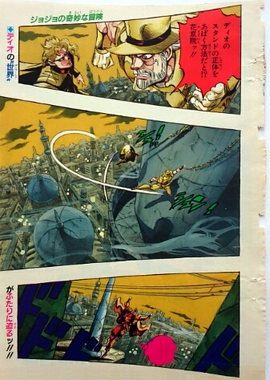 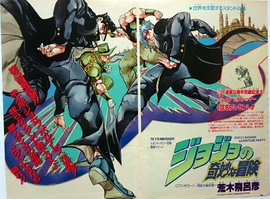 Every time Kakyoin sees Hierophant Green, he remembers his lonely childhood. He believed he could have no friends because no one could see Hierophant Green. He then remembers meeting Joseph, Jotaro, Avdol, Polnareff, and Iggy; how they were the first friends he ever had. He decides that he must make Hierophant Green invisible again in order to find out the secret of The World. Joseph and Kakyoin swing from the rooftops, trying to escape from DIO. Jotaro and Polnareff follow from afar. DIO lands on a rooftop and triggers Hierophant Green's attack. DIO deflects the Emerald Splash but finds himself entangled in Hierophant Green's web. Every tentacle he breaks causes an Emerald Splash to fire. Completely surrounded, Kakyoin can sense DIO's every move. He attacks with a Twenty Meter Radius Emerald Splash. However, DIO is unconcerned as he shows off The World's ability: the power to reign over the world. DIO stops time. He approaches Kakyoin and punches him clean through the abdomen.