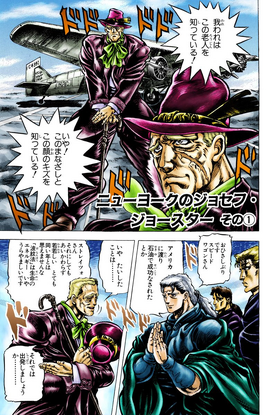 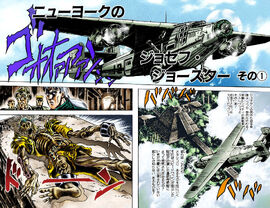 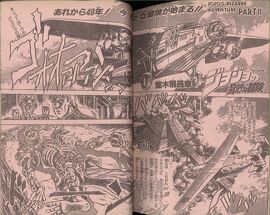 Episode 10
Joseph Joestar of New York, Part 1 (ニューヨークのジョセフ・ジョースター その①, Nyū Yōku no Josefu Jōsutā Sono 1), originally New York's JoJo (ニューヨークのジョジョ, Nyū Yōku no JoJo) in the WSJ release, is the very first chapter of Battle Tendency and the forty-fifth chapter of the JoJo's Bizarre Adventure manga. Additionally, unlike in the tankōbon release, this chapter is included in the JoJonium release of Battle Tendency rather than in the last volume of the previous part, Phantom Blood.

Battle Tendency is set in 1938, 49 years after the events of Phantom Blood. Friends of Jonathan, Speedwagon and Straizo, meet once again. Speedwagon has become a rich oil tycoon (striking it big in Texas oil reserves) and Straizo has succeeded Tonpetty as master of the Ripple.

Speedwagon and Straizo travel to Mexico to investigate a mysterious, underground cavern. Inside, they discover a large stone pillar decorated with dozens of Stone Masks similar to the one they had gone to great pains to destroy forty-nine years ago. Embedded in the pillar is also the body of a large, strange man.

Meanwhile, in New York, a young British man is purchasing from a street vendor, but has his wallet stolen by a young African-American pick-pocket named Smokey Brown. However, after turning a corner into an alleyway, they are stopped by two corrupt policemen, who won't let him free unless he pays them part of his earnings from thievery.

Then, the young man that Smokey stole from starts covering for the youth. The policemen start to get violent, but the mysterious man takes care of them swiftly using the Ripple. He reveals himself to be named Joseph "JoJo" Joestar, and tells his newfound friend that he had unknowingly inherited the strange technique from his grandfather, Jonathan Joestar.