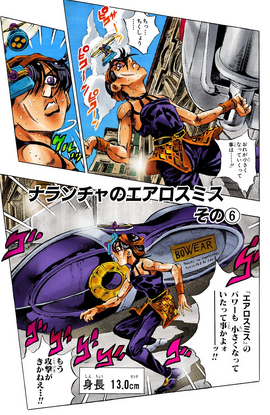 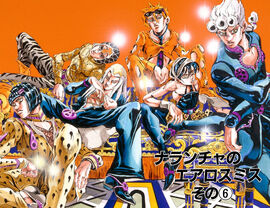 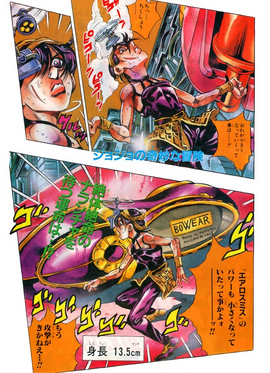 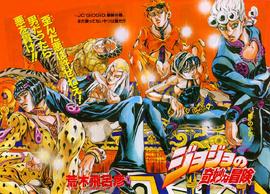 GW Episode 11
Narancia's Aerosmith, Part 6 (ナランチャのエアロスミス その⑥, Narancha no Earosumisu Sono 6), originally A Parcel of "Punishment"! (“罰”の小包！, "Batsu" no Kozutsumi!) in the WSJ release, is the thirty-sixth chapter of Vento Aureo and the four hundred seventy-fifth chapter of the JoJo's Bizarre Adventure manga.

Narancia, now only thirteen centimeters tall (or roughly five inches), continues to shrink even further. Due to shrinking, Aerosmith's power has been greatly reduced, causing Narancia to call it back so it cannot be attacked by Formaggio. Narancia attempts to flee to a nearby alley, but a now normal-sized Formaggio steps on Narancia, and holds him down with his shoe. Formaggio interrogates Narancia, but the latter refuses to tell him anything. This enrages Formaggio as he remembers the reason the Squadra Esecuzioni decided to betray the boss in the first place.

The Squadra Esecuzioni was a group within Passione that specialized in assassination. Within this group there were two members, Sorbet and Gelato, who were incredibly close. One day the group found Gelato's corpse on their sofa, with a note that said "punishment." Gelato had been caught trying to reveal the boss' identity, and was killed as a result. Sorbet was nowhere to be seen.

The next day, the group received a package in the mail. In it was a piece of meat contained within a glass box, and framed. They received similar packages every day for the next thirty-six days. When they put all the pieces together, they saw that the meat came together to form the corpse of their friend, Sorbet. They deduced that Gelato was forced to watch his close friend die, and that he choked on his own gag to kill himself. The group was too afraid to do anything, and planned on giving up revealing the boss' identity, until they learned of his daughter.

Formaggio continues to interrogate the shrunken Narancia, asking where the boss' daughter is hiding, believing she is a Stand user and is capable of determining the boss' identity. Formaggio then pulls out a spider he caught in the sewers, telling Narancia that if he doesn't talk, he will surely be its next meal.