Episode 2 - A Letter from the Past
The Stone Mask, Part 2 (石仮面 その②, Ishi Kamen Sono 2), originally The Live Subject Test of the Mask (仮面の人体実験, Kamen no Jintai Jikken) in the WSJ release, is the ninth chapter of Phantom Blood and the ninth chapter of the JoJo's Bizarre Adventure manga.

Jonathan drops the knife of his first assailant to the ground as the last of three men rushes towards him. The brim of the man's bowler hat falls off to reveal three blades which begin to spin, forming a deadly weapon. Jonathan is forced to move into a defensive stance as the man prepares to launch his hat. Thinking quickly, Jonathan kicks the knife he had dropped earlier and sends it flying towards his opponent. The man deflects the knife at the expense of his throw being off its mark; though it was intended to hit Jonathan's head it misses but managed to cut deeply into his crossed arms. After taking the blow Jonathan does not flinch, and the man is completely caught off guard, taking a heavy kick to the face.

Having defeated all three men, Jonathan is suddenly surrounded by a mob of thugs, who are ready to attack him. The man Jonathan just defeated tells the mob to not harm him. He introduces himself as Speedwagon, and asks Jonathan why he did not put all his power into the kick that sent him flying. Jonathan claims that he is simply looking for a way to help his father, and he figured Speedwagon must also have a family that cares for him. Amused by Jonathan's naivety and nobility, Speedwagon offers to take Jonathan to the Oriental shop where can find the poison seller and antidote he's looking for.

At a port town on the outskirts of the Joestar mansion, Dio is distressed by his suspicions regarding Jonathan. He is unsure of Jonathan's fate on Ogre Street and worries that he may have found an antidote to the poison, against all odds. As a result of his worrisome state, Dio has begun drinking and is furious at himself for following in his father's footsteps.

Dio bumps into a couple of belligerent, older men on the street, who taunt him for being out so late at night. Dio takes a sip from his bottle and smashes it into one of the men's faces. The other man retaliates and pulls out a knife to attack. Dio decides to take the opportunity and test out his plan for killing Jonathan; he brings out the Stone Mask and forces is onto the man's face. He grabs the man's hand and uses it to stab the man's partner. The blood from the wound activates the mask, activating its talons. It proceeds to emit a strange, glowing light. 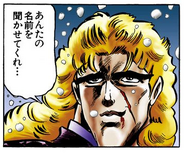 Speedwagon being friendly with Jonathan 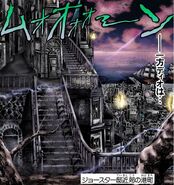 Dio drinking in the streets 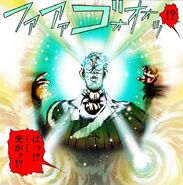