GW Episode 33 - His Name Is Diavolo

It is the evolved form of Silver Chariot after being pierced by the Arrow. Aside from Gold Experience, it is the only other Stand known to be called as Requiem.

Chariot Requiem is a humanoid Stand of light build and average height.

Its most striking feature is that it is completely shrouded in shadows, appearing entirely black. It wears a musketeer hat, one side folded over its top, a coat over which Chariot Requiem sports large rings serving as shoulder pads, a stylized belt, and a trouser decorated with braces around the ankles.

Bucciarati notes that Chariot Requiem is fully materialized and thus ordinary people can see and interact with it.[2] Its face is shown to have an arrow-like mark underneath what seems to be a large, empty eye. Bucciarati even described it as having an appearance similar to 'black plastic'.

Its design is based on the myth of a man wearing pitch-black, resembling Death visiting Austrian composer Wolfgang Amadeus MozartW to commission the ultimately-unfinished Requiem that he would work on in his final days. It may be possible that Chariot Reqiuem's clothes are mimicing the appearence of a nobleman, as the upper class are usually described as being one step above the class of knights in the feudal hierarchy. This Stand also is of unisex design.[1]

Chariot Requiem is the Stand that Polnareff develops when Silver Chariot is stabbed with the Arrow. Polnareff died shortly after the arrow pierced the original Silver Chariot, and, as a result, the Stand survived and moves on its own (much like Notorious B.I.G).

Chariot Requiem seems to be nearly mindless, generally walking straight forward and ignoring outside stimuli; however, it will attack anyone who tries to take the Arrow from it, having inherited Polnareff's priority of protecting it. Polnareff himself describes the Stand as "berserk".[3]

Chariot Requiem is an automated Stand that follows its late User's final wish to protect the Arrow at all costs. It doesn't show any combat ability, yet can be considered one of the most dangerous Stands ever featured in the JoJo's Bizarre Adventure series due to its mastery over souls. However, it possesses a hidden but critical weakness.

Chariot Requiem is particularly resilient, being able to reattach detached limbs with ease (as demonstrated when it reconnects its arm after it was severed by Sticky Fingers and Sex Pistols.[4][5])

Chariot Requiem has the ability to manipulate the souls of living beings, including humans, animals, and insects. In fact, Chariot Requiem is, by its very nature, the "silhouette of the soul"; if anyone looks at Chariot Requiem, they may notice that its shadow will always be opposite to the observer, regardless of where any source of light, such as the sun, is coming from.[5][6]

It was Diavolo who discovered that what appears as Requiem's shadow is actually the shadow of the observer's own soul: Chariot Requiem manifests itself in this shadow.[6] To accomplish this, it manifests a psychic orb of light which always hovers behind one's head and is only visible to the person to whom it is attached. A Stand can destroy the orb, in which case, the shadow would no longer be cast and Chariot Requiem would fall apart.[6]

Upon activation, Chariot Requiem puts every living being in a large area (at least the entirety of Rome) around it into a forceful sleep.[3][7][8] During that sleep, Requiem switches the soul of one living being with that of the closest living being, regardless of species.

If a body physically dies, the soul currently inhabiting it will die too. In this case, the previous owner is able to transfer back to their own body, provided it is in a condition where it is still suitable for keeping them alive.[9]

As Chariot Requiem is able to affect souls, it can also affect nearby Stands, as they are a reflection of the user's soul.

The first known ability of Chariot Requiem is to greatly empower Stands upon swapping the souls of Stand users, energizing the Stands and making them more powerful than they were before the soul switch; it can even reach the point where some Users can hardly control their Stands.[10]

Secondly, Chariot Requiem can take control of other Stands; it used this ability to protect the Arrow from Stand users, as any Stand user who tried to take the Arrow or even affect it in the slightest would be attacked by their own Stand. Sentient Stands are shown to temporarily go mad and wish to kill their user in a psychotic fashion as in the case of Sex Pistols' No.1.[11] The response is always proportional to the attack; merely reaching out one's hand will result in their Stand manifesting its hand and grabbing the user, while attacking the Arrow will cause a full-scale retaliation.[2]

Complete Alteration of All Life

With enough time, Chariot Requiem will begin to transform the souls of beings affected by its ability into the souls of unidentifiable, otherworldly beings, causing an accelerated transformation of the body. The effects of the violent transformation appear to be painless, as those who began transforming continued their activities without noticing that they were physically changing.[5]

Polnareff comes to the conclusion that the true ability of Requiem is to switch the entirety of the people, animals, and plants of Earth with "something else".[4] The theorized result would be the complete metamorphosis of every organism in the biosphere, both in body and soul, into completely new and absolutely unknown entities.

The Capcom fighting game marks the debut of Requiem in a video game. It appears as Polnareff's level 3 super combo move, where Silver Chariot gets shot in the head by an Arrow, and briefly transforms into its Requiem form. After the light emitted from the Stand fully engulfs the screen without interruption, the opponent is instantly put to sleep.

Requiem appears as the enemy faced in Chapter 21, as the player must defeat Requiem before it reaches the Coliseum's exit, taking control of Bucciarati in Diavolo's body.

Requiem never directly attacks Bucciarati, only walking towards the exit without fail. Defensively, Requiem summons a copy of Sticky Fingers that retaliates whenever the player tries to attack it. The copy can use all the attacks available within Bucciarati's arsenal. In Another Story mode, Chariot Requiem continues to use Sticky Fingers even if the player uses a different character for the battle.

Requiem appears as a stage hazard on the Part 5 stage, "Coliseum", holding the arrow. Those who enter its range will fall asleep and be left vulnerable to their opponent, having to rapidly shake the movement stick in order to awaken. The orb of light that comes with Requiem will follow any of the four fighters, always being behind them. Hitting it once will temporarily vanquish Chariot Requiem for a moment. 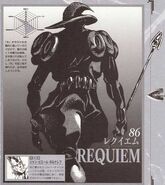 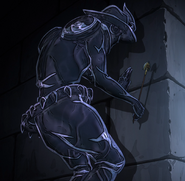 Chariot Requiem waiting behind a wall

Sticky Fingers under the influence of Chariot Requiem

Sex Pistols No. 1 under the influence of Chariot Requiem

Gold Experience under the influence of Chariot Requiem

Chariot Requiem notices that Polnareff has taken the arrow

A visualization of how Chariot Requiem's shadow differs between individuals

Chariot Requiem is destroyed by Bucciarati

The last remains of Chariot Requiem dissolve into nothing

Requiem as Polnareff's LV3 Super in Heritage for the Future

On the Colosseum stage in Eyes of Heaven