A mad surgeon reconverted into a member of Passione and by extension the Boss' Unita Speciale, Cioccolata is dispatched near Rome alongside his human pet Secco in order to kill Team Bucciarati. He subsequently battles Giorno Giovanna and Guido Mista at the top of a tower.

Cioccolata is a Stand User and uses his noxious Green Day to infect people with a deadly mold.

Cioccolata is a man of above average build, having short hair save for round locks on the top of his head, which closely resemble microscopic mold, or a microbe. He also bears marks on his forehead, cheeks, and nose, wears earrings, as well as a dark neckband.

Cioccolata wears a stylized bright long coat, in which a cross-shaped lace partially reveals his chest and multiple T-shaped holes cover his sleeves (the anime depicts him with only four per arm). Under the same bright trousers, Cioccolata wears a dark thong.

Cioccolata is a skilled, manipulative sadist. According to Diavolo, Cioccolata was a former surgeon dismissed from his hospital for a medical accident two years before the start of Vento Aureo. However, the deaths were not accidents but were just cover-ups for Cioccolata to freely operate on them, diagnosing healthy patients ill before doing so. He would sometimes limit their anesthetics so the patients would regain consciousness mid-operation, allowing him to delight in the patient's suffering and death. By far, Cioccolata is extremely cruel, aside from killing patients and emotionally abusing the elders into committing suicide. The addition of his stand, Green Day, highlights his callous nature--infecting anybody with its remorseless, flesh-eating mold. Even Diavolo is reluctant to dispatch him to get rid of Bucciarati's group and is considered a monster by members of Passione.

Cioccolata is driven by his morbid curiosity, insisting on recording every death he witnesses and enjoying every single moment, as he claims these are for his own personal progress as a surgeon. His sadism gives him enough ruthlessness to even endanger Giorno and Mista. Cioccolata is also prone to gloating, presenting his philosophy of one's own progress at the first opportunity and expressing his enjoyment at others' suffering loudly. Near the end of their fight, Cioccolata reveals to Giorno that he believes in a theory of happiness. This theory claims that true happiness can be derived from two kinds of situations: When one's despair is replaced with hope as circumstances get better for them, and when one looks down on another falling into despair themselves, the latter of which Cioccolata takes preference.

While Cioccolata holds firmly in his theory of happiness, he is quite hypocritical if he's met with the ordeal from someone other than himself. When Cioccolata had a beetle emerged from his head from Giorno's Gold Experience with the latter claiming he had beaten him, Cioccolata lunged at him while declaring Giorno mean.

Despite his sadistic nature, Cioccolata is very fond of his servant Secco, treating him as a pet of some sort and giving him sugar cubes regularly. He even confides his ambition of surpassing the boss during the fight in his confidence over their shared invincibility, entrusting him with the act of finding the secret to Diavolo's downfall in his final message.

Cioccolata's theory of happiness exemplifies just how greatly arrogant Cioccolata is. While he's confident in Green Day, Cioccolata's gloating and narcissism is proven to his downfall. When he thought he bested Giorno when he took Mista and Coco Jumbo hostage, he bragged about the assumption he won only to have a beetle emerged from his head. In that moment when Giorno stated he was winning against him from the start, Cioccolata flew into a fit of rage and lunged at him.

Cioccolata's utter malice and sadism earned him a prolonged beating from Gold Experience.

Cioccolata's Stand, Green Day, is a humanoid power Stand which spreads a deadly mold, which eventually consumes people's flesh. The mold's growth is triggered by a lowering of altitude and has unlimited range, as long as other people are infected.

Surgical Genius: Cioccolata is a trained surgeon and his sick experiments gave him an intimate knowledge of the human body, notably on which body parts he can cut while preserving his victim's life. His surgical skills are great, as he could perform surgery on himself quickly enough to bisect his own body while Mista and Giorno went up to meet him. In addition, his knowledge of medical tools and sealing blood vessels allows him to limit his blood loss so that he wouldn't bleed out during his battle with Giorno.

A young Cioccolata was constantly at the top of his class. When he was fourteen years old, he volunteered to take care of bedridden elderly people and received a commendation from the town mayor himself. In truth, however, Cioccolata did not actually take care of the elderly at all. Instead, he intentionally fed them unhygienic food and illegal drugs, and would then whisper into their ears about how no one would visit them and other emotionally destructive things. This torment eventually drove old people to despair and eventually commit suicide. He even filmed the expressions of his helpless victims and their deaths. Diavolo found that he has kept over 25 tapes worth of this material. After psychologically manipulating nine patients into committing suicide, Cioccolata decided to become a doctor.

Cioccolata eventually became a surgeon, continuing his crimes on unwitting patients. There are four cases in which Cioccolata misdiagnosed people to perform surgery on them but also would mess up the dose of anesthetic so that they would wake up mid-operation. Two years before the events of Vento Aureo, Cioccolata killed one of his patients. He was caught and sacked, but his deliberate murder was nonetheless mistaken as an accident. The anime version shows that the patient has had his stomach cut open and his innards played with by Cioccolata.

At some point, one of his would-be victims, Secco, ended up as his underling and a sort of "pet". Eventually, the two would join the underground crime syndicate Passione and gained their Stands, though the Boss believed that their abilities were too dangerous to carry out missions and that their loyalty was fickle.

The anime implies that he, alongside Secco, was the one to brutally cut Sorbet of La Squadra Esecuzioni into pieces while a helpless and captured Gelato choked on his gag.

He was first introduced when Diavolo, explaining to Doppio, claimed that he had no choice but to call Cioccolata and Secco to intercept Team Bucciarati at Rome. (In the anime, he makes a slight appearance in Squadra Esecuzioni's backstory before-hand, brutally executing Sorbet and Gelato.) Diavolo, although not very hateful or spiteful of many people, loathed Cioccolata, referring to him as "despicable" and "trash." He is first seen using his Stand Green Day on Mista and Narancia. With his Stand in effect, he moves to a safer spot above the group as they suffer, telling Secco to record their pain. When Mista, Bucciarati, and Giorno escape his deadly trap, he and Secco board a helicopter to ascend above Rome and raise the effects of Green Day, directly dropping corpses with the mold onto Bucciarati and co.'s car. Secco jumps down from the helicopter to stall the gang but ends up fighting Bucciarati as the other two head for Cioccolata's helicopter.

With a quick combo, Mista fires bullets at a nearby building, allowing Giorno to use his Gold Experience to turn the bullets into vines and latch onto the helicopter, taking the fight to the air. The two reach the helicopter, and Mista fires his Sex Pistols into the craft. It is then that all of them come to the conclusion that Cioccolata was not inside before Green Day's mold suddenly destroys most of them, incapacitating Mista. When Giorno gets to the helicopter, accompanied by No.5, the last Sex Pistol left available and is the one keeping Mista alive, Cioccolata shows himself in an ambush as missing most of his body aside from his head and half his torso. Being an expert in human anatomy, he reveals that he is able to dismember his own body while keeping himself alive by using Green Day's mold to stop vital blood vessels from bleeding. With said skill, he is able to hide and move his dismembered body parts around the helicopter and overwhelms Giorno. After throwing him out of the helicopter, Cioccolata gloats as he believes that he gets to watch Giorno reduced to dust as he falls as part of his own theory of happiness.

However, No.5 sends the bullet it carried with it through Giorno's hand and into the helicopter's propeller, allowing a branch to grow and catch him. Cioccolata decides to tilt the helicopter in order for his mold to destroy the branch, but upon doing so, the branch's roots are reverted back into the bullet as the helicopter's propellers deflect it straight into his head, seemingly killing him. Giorno tells Cioccolata's limp body at length that he'll spare him if he does not attack when he climbs up to get to him. Upon Giorno's first sudden movement, Cioccolata reveals that in the time that Giorno took speaking, his left arm had gotten to Mista's throat, promising to slit it should Giorno attack him. Fortunately for Mista, Giorno had used that same time frame to allow the bullet that entered Cioccolata's head earlier to turn into a stag beetle with Gold Experience's ability and eat Cioccolata's brain. While Cioccolata is shocked that Giorno lied about sparing his life, Giorno tells him to "know his place," and that doing something like sparing the likes of him is too good to be true. Finally, after expressing disappointment in Cioccolata's supposed theory of happiness, Giorno has Gold Experience finish off Cioccolata with a very lengthy fist barrage, severing chunks of his body and sending him flying off the roof and into a combustible trash compactor on the ground level, ending Green Day's destruction all over Rome.

Cioccolata appears as a supporting enemy for Secco in Chapter 17 and is faced directly in Chapter 18 with the player taking control of Giorno.

In Chapter 17, Mista must not stop moving towards the end of the level or else Green Day's mold will start manifesting on him and deal continuous damage.

In Chapter 18, Giorno and Cioccolata battle on the rooftop. Unlike other Stand Users, Green Day acts separately from Cioccolata: The Stand will hover about the stage, "bouncing" off the invisible walls and leaving trails of mold that will inflict continuous damage on Giorno if he comes into contact. Cioccolata himself will attack Giorno, either by kicking and punching him, or tearing himself into pieces and attacking the player as individually moving parts.

Cioccolata's first appearance alongside Secco, as Diavolo tells Vinegar Doppio to summon them

Cioccolata as described by Diavolo

Shot by a bullet transformed by Gold Experience

Cioccolata's infamous death at the hands of Giorno Giovanna

Cioccolata and Secco watch Gelato choke himself with his gag

Cioccolata rubbing Secco for the footage

Cioccolata talks on the phone with Secco 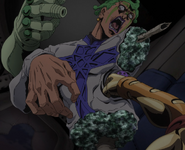 A beetle rips its way out of Cioccolata's head.

Cioccolata getting barraged by Gold Experience

Continuing to get barraged by Gold Experience

And still continuing to be barraged

Cioccolata punted into a Garbage Truck, killing him 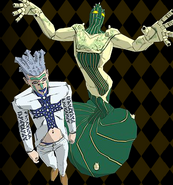 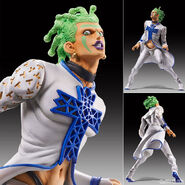 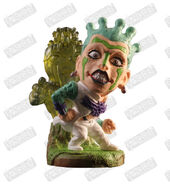 Cioccolata as a Chara Heroes figurine.