Clash (クラッシュ, Kurasshu) is the Stand of Squalo, featured in Vento Aureo.

Clash appears as a mechanical shark-like being with two eyes on the sides of its head and a single large eye in the middle. Its size varies depending on the size of the body of liquid it occupies.

Its design is based on an OstracodermW, an extinct fish species.[2]

In the colored manga, Clash is colored gray, while in the anime adaptation it is copper. In all media it is depicted with its lateral eyes being red and its medial eye being yellow.

Clash is a long-distance Stand that can be precisely manipulated by Squalo from afar. Although fragile, Clash has the ability to appear inside any mass of liquid and rip off body parts of its target, making it a Stand appropriate for deadly ambushes.

Clash is a fish Stand, thus it must stay inside liquids to persist and is only able to make brief leaps out of liquid to attack.

However, it can instantly teleport into any body of liquid of a minimal size near the one it is occupying at the moment.[3] Liquids it has occupied include hot soup, wine,[3] fresh or sea water, and even Narancia’s tears.[4] Clash can also sink inside and emerge out bodies of liquid as if they have depth despite being extremely shallow, as well as take anything or anyone along with it when transferring between liquids. Thus it could drag Giorno away through a puddle of water from a leaking pipe.[5]

However it cannot teleport into sealed bodies of liquid[6] or teleport more than 2 or 3 meters away from its current position according to Narancia.[7] Moreover the warping process can become slower if Clash is hurt.[7]

It also takes a practical size depending on the liquid that it occupies:[6] when in a wine glass, it is about the size of a small fish,[3] but appears to be larger than a canoe when swimming in one of Venice's canals.[4] It seems to be dependant on how much surface the water is covering, as Clash can appear as big as a cat when inside a shallow puddle.[5] 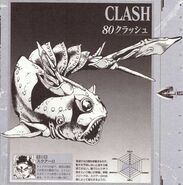 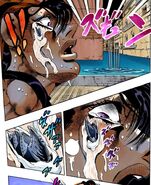 Clash taunts Narancia by appearing in his tears

Narancia notices Clash in his spoon.

Clash inside a bottle.

Clash in a glass cup.