Coco Jumbo (ココ・ジャンボ, Koko Janbo) is a side character and ally featured in Vento Aureo.

This turtle is a gift to Team Bucciarati from the Boss of Passione. He serves as a mobile hideout for the gang thanks to his Stand, Mr. President.

Coco Jumbo is a small land turtle[4] (亀) whose main characteristic is a key-shaped hole on top of his shell, in which a special key allowing people into its Stand can be placed. Prosciutto describes him particularly as being 'dark' in color[1].

Despite being an animal Stand user, Coco Jumbo doesn't display any kind of personality or heightened intelligence whatsoever. He seems to, like all turtles, prefer to hide in small, dark places. Even with a conflict going on, Coco Jumbo remains indifferent to the situation, and simply keeps idling. By the end of Vento Aureo, Coco Jumbo's body became permanently affixed to Polnareff's soul, gaining his personality and allowing him to speak to humans.

When a special key is placed in the hole on his back, people can access a small room within the turtle.

Nothing much is known about Coco Jumbo. It is assumed that Diavolo used the Bow and Arrow on him, giving Coco Jumbo his current abilities.

Coco Jumbo is introduced idling in Naples' train station. At first, Bucciarati doesn't take any interest in him, looking for a keyhole corresponding to the key he retrieved earlier. Soon, he notices the keyhole in the turtle's back and realizes what his power is. During their adventure, Coco Jumbo serves as a room for Team Bucciarati as they travel through Italy, allowing them to sneak aboard various means of transportation and providing a safe room for any injured protagonist.

Coco Jumbo plays a key role in saving the lives of both Bucciarati and Trish Una during their first encounter with Diavolo. Giorno Giovanna takes DNA from the turtle and turns it into one of his ladybug brooches using his Gold Experience and hands it to Bucciarati as a tracking device. When Giorno begins sensing that something has gone wrong the moment Bucciarati's phone is destroyed by Diavolo, he turns the brooch back into a clone of Coco Jumbo, who sucks the Boss into itself, stalling him long enough to allow Bucciarati to come up with a plan in order to escape with Trish.

The turtle first demonstrating his ability to Bruno Bucciarati 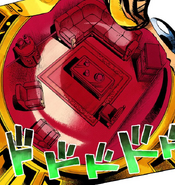 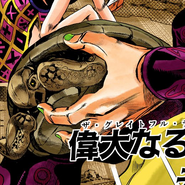 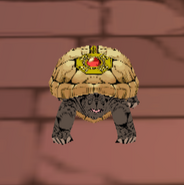 Coco Jumbo's model as he appears in JoJo's Bizarre Adventure: Eyes of Heaven