Cream Starter takes the form of a hand-held spray can.

The spray is light brown in the colored manga.

Similar to Emperor and Beach Boy; Cream Starter functions as a tool and weapon for Hot Pants, who uses its ability to manipulate flesh in various ways. Its power is very versatile and deadly against humans.

A rare feature, Cream Starter can be seen and used by anyone, even people without Stands.

The signature ability of Cream Starter is to spray flesh as a cream-like substance that then retakes its original consistence.[2]

Hot Pants can spray a certain amount of flesh to act as a projectile, using her own flesh,[3] or absorbing the flesh of an individual by directly touching them,[2] to use as fuel for her spray. It seems that for small uses, no flesh is needed. The flesh can fly tens of meter in the air if need be,[3] but Hot Pants typically uses the spray within proximity of herself.

If the sprayed flesh touches someone, it fuses with the individual in various harmful or beneficial ways depending on Hot Pants' goal:

Hot Pants can transform her whole body into fuel for the spray, allowing her to become more liquid-like and creep through narrow spaces, infiltrating a presidential residence this way.[7] She can also detach body parts such as a hand with Cream Starter and spray them away to attack and act from unexpected angles.[2] A downside of this ability is a detached body part transfers any pain it feels back to the user. 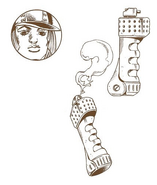 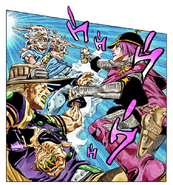 Johnny being affected by Cream Starter