Daiya is the outgoing youngest of Norisuke Higashikata IV's four children. When Josuke Higashikata is introduced to the family, she develops a crush on him. Daiya is a Stand User and can take memories away with her California King Bed.

Daiya is the youngest member of Norisuke Higashikata IV's progeny at 16 years of age. She personifies a certain kawaii, between the toy-like nature of her Stand's appearance and the game-playing it facilitates, her childlike possessiveness of and offense at Josuke Higashikata's betrayal, and the playful manner of her speech. She is close to her father, who tends to spoil and is overprotective of her, and she returns this affection for her father.

She is infatuated with Josuke. After engaging him with her Stand, she assumes a threatening possessiveness; however, upon her defeat she settles for a warm preference. Josuke finds Daiya as an easy source of information and guidance in the Higashikata household by relying on her need for him to like her, as if to atone for her prior actions. However, he seems to have grown somewhat fond of her at the very least as a friend.

Daiya is severely sight-impaired, being barely able to see light or read a paper right under her nose, yet she is highly self-reliant and capable of orientation, at least within the family home.

With her Stand, California King Bed, after engaging them in a unique game, Daiya is able to win and enjoy an opponent's memories.

Daiya was born the second daughter and youngest child of Norisuke Higashikata IV and Kaato Higashikata. When Daiya was two, she fell into the area where the Wall Eyes are nowadays. Her vision continuously worsened from that instant, but she acquired her Stand California King Bed in exchange.

At one point, Kaato went to prison but Daiya was too young to remember her, thus she forgot about her mother.

Daiya is first seen when Josuke is introduced to the family, she questions him if he likes the Misty Mellotron, an electronic instrument. When her father asks Josuke to look after her. She refuses to be treated in a special way for being blind, saying that he should act natural. She quickly infatuates herself with Josuke.

Daiya uses her Stand on Josuke in order to take advantage of him via seduction. She takes his very limited memories of what transpired since he was discovered by Yasuho. While taking his memory of the symbol that Yoshikage Kira had that the Higashikatas had, the memory of Yasuho and the memory of using his Stand, Soft & Wet. She almost succeeds in keeping them until she finds herself standing on his shadow (which reverses the memory taking abilities of her Stand).

Despite her mischief, Josuke uses her to go into the secret room that he was forbidden to enter only to come across a book of the family tree which connects Yoshikage Kira of the Joestar family as a distant relative to the Higashikata family. Afterwards, she still is infatuated with Josuke, albeit harmlessly, but the feelings are definitely not mutual, much to her father's increasing dismay & worry.

Hato Higashikata, her older sister, eventually introduces her new boyfriend to her whole family, including Daiya who is excited at the prospect of meeting her sister's first boyfriend. Said boyfriend, named Tamaki Damo, reveals himself as the malevolent leader of the Locacaca Smuggling Organization and incapacitates the whole family. Daiya is liquefied into a puddle in the foyer and spends the remainder of the confrontation in that state before returning to normal once Damo is defeated.

One day, Daiya meets her mother Kaato, who has returned from prison. Stunned to learn that her mother is alive and present, Daiya is confused, but Joshu's antics ruin the reunion.

Daiya is subsequently seen having breakfast at her family's home, during which she eats a bunch of Joshu's fish sausages.

Daiya makes a cameo appearance in JoJo's Bizarre Adventure: Eyes of Heaven. She appears inside the Higashikata House on the Part 8 stage, sitting alongside Hato and Jobin on the couch. 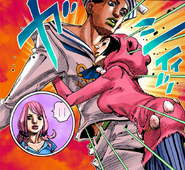 Daiya greets Josuke with a hug 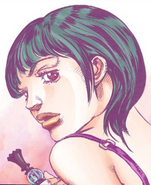 Daiya in her swimsuit

Daiya, along with the rest of the Higashikata family, can do nothing but watch as Tsurugi succumbs to the Rock Disease 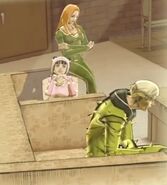 With Hato and Jobin in Eyes of Heaven 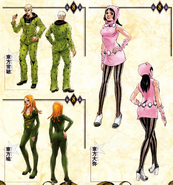 Daiya,Hato and Jobin Renders from Eyes of Heaven 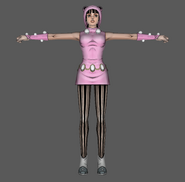 Daiya's Model From Eyes of Heaven