Dario is the father of Dio Brando. An alcoholic and abusive man, he is primarily responsible for contributing to Dio's descent into evil. After a tragic misunderstanding, George Joestar I decides to give him a favor and adopts his son Dio into the Joestar Family.

Dario appears as an elder man with a stocky build. Balding save some hair on the back of his head and a white beard, he bears a scar crossing his forehead, and is missing several teeth.

Dario has a tattoo on his chest of a cross with the words 'In memory of mother' visible.

Dario Brando is portrayed as a corrupt, alcoholic, and abusive father, as well as extremely immoral. Being a petty thief, Dario has no qualm stealing from the dead, notably stealing a then unconscious George Joestar's ring, believing him to be dead. He also told his companion to let Jonathan, then a baby, die. When George woke up, Dario tricked him into believing he was saving him, hoping to exploit the gentleman's naivete. When George covered for him out of kindness, Dario couldn't understand the gesture.[2]

Dario was an abusive husband and father, having presumably forced his wife to work to death. He was hated by his own son, whom he would yell at and beat for the flimsiest reasons. At some point, he asked his son to sell his dead mother's clothes in order to buy more booze. His alcoholic nature was shared with Dio, who hated himself for resembling his father after getting drunk.[3]

Nonetheless, he cared about Dio enough to let him be adopted within the Joestar Family.[2]

Dario was a poor man in Victorian England who witnessed George Joestar I's carriage crash one day in 1868, looting the wreckage on the assumption that there no survivors. But as he made his accomplice note the infant is still alive, Dario was seen by George, who assumed that Dario saved his life and felt indebted to him. But even when George later learned the truth when the head inspector alerted him that Dario was in jail from trying to pawn Mary Joestar's wedding ring, George pressed no charges and asked Dario to become a good man for his family. But even after receiving money from George to start a hotel, his lack of business skills and dishonesty caused Dario to end up back in poverty and worked his wife to an early grave.[4]

For the next twelve years, Dario took out his frustration on his son Dio as he grew to hate his father enough to secretly murder him with poison he got from Wang Chan. With Dario unaware that his own son was killing him, he died telling Dio of the debt George made to him and tells his son to take advantage of it. However, Dio was unaware of the letter Dario had sent to the Joestar Mansion, which would play a role in exposing his attempted murder of George seven years after his father's death.

Dario appears in the game's first cutscenes, similarly to the original story, as he gives his son a letter that will allow him to live with the Joestars. After the third battle against Dio, the villain briefly mentions his father as he drinks and later meets the one who would become the first vampire seen in the series. 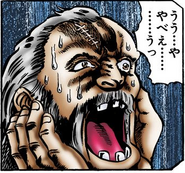 Close up of Dario in the manga 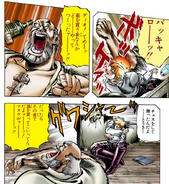 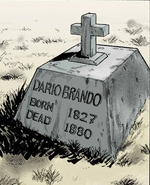 Dario's grave in the manga

Dario's letter to George in the manga

Dario's letter to George in anime

Dario's grave in the anime 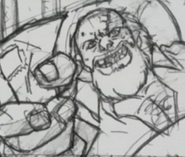 Giving the letter to Dio in the Phantom Blood PS2 game