Death Thirteen appears as a humanoid cloaked in a dark robe. It wears a smiling jester mask with downwards curved eyes and an eerie smile, as well as metallic gauntlets, shoulder pads, a collar, and a high hat. The face's design takes inspiration from the masks found during the Venetian carnivalW.[1]

Death Thirteen is armed with a great scythe.

Outside of its head and arms, Death Thirteen has no physical body, meaning any attacks aimed at its clothing simply passes through the emptiness under its mantle.[2]

Being an extension of Mannish Boy's consciousness, Thirteen reflects its user's vulgar and sadistic personality. In the dream world where it is almighty, Death Thirteen constantly insults and belittles its victims and takes pleasure in torturing them, having at one point made Kakyoin swallow several eyeballs just to horrify him.[3]

It has the habit of shouting "Lali-ho." It represents the Tarot Card DeathW, which represents transformation and change. The stand's name also cites its place as the 13th card of the Major Arcana.

Death Thirteen is unique in that it can only exist inside a dream world and thus requires that its victims are asleep. It is incredibly dangerous because it is certain to take people by surprise and it was only through chance that the Joestar Group survived its encounter. It is offset by the fact that the user, a baby at that, is defenseless when everyone is awake and cannot attract suspicion.

This ability comes in two parts. When anything alive (human or otherwise) falls asleep near Mannish Boy, Death Thirteen's User, they are drawn into Death Thirteen's dream world, which appears as a massive carnival, complete with Ferris wheels and roller coasters.[4] Anything in the victims immediate vicinity, such as the clothing they were wearing when the fell asleep, will be brought into the dream world with them.

The most redoubtable property of this dream world is that Stand Users cannot summon their Stand inside the dream world and are defenseless.[5] Death Thirteen explains that because Stands are made of spiritual energy, during their sleep, their spirits are "off-guard" and cannot defend themselves, thus Users cannot conjure Stands.[6] However, if a Stand User falls asleep (or gets knocked unconscious) with their Stand already active, it will be brought to the dream world with them.[7]

Furthermore, Death Thirteen has full control over this dream world. It is able to make death machines out of mechanical items, summon objects out of nothing, manipulate Polnareff's hair or Joseph's hand, basically shaping everything as it sees fit.[6] Although, it can't automatically distinguish whether or not something is from the dream world or the real world. It also lacks awareness of if a Stand User has fallen asleep with their Stand. As such, it believed that Hierophant Green was one of the fake Stands it created to mess with the Joestar group until it revealed itself to be real.

In the dream world, Death Thirteen is free to torment and kill anyone inside the dream with its scythe. Any injuries the person receives in the dream world are transferred to their body in the real world, including fatal ones.[4] Inversely, it can also heal wounds if coerced, which also transfers into the real world.[7].

No one can willingly wake up from the dream world, even if they injure themselves.[3] However, they can be normally woken up by someone else in the real world and thus saved until the next time the fall asleep.[4] When they wake up, the surviving victims won't be able to remember anything from the dream, though they will still feel the dread they felt from being subjected to Death Thirteen's torment, giving the impression that they simply had a nightmare.[4] However, someone who manages to bring their Stand into the dream world will still remember everything after waking up.[2]

Because people cannot summon their Stands while asleep, Death Thirteen is basically invincible in the dream, as only a Stand can beat a Stand. However, if circumstances do obligate it to fight a Stand, it remains dangerous because of its mastery over the surrounding world, but it is also very fragile and weak, relying on scythe sweeps to wound. Thus it was easily defeated by Hierophant Green.[7]

Unlike the original storyline, in the game, Mannish Boy attacks the entire group from inside a plane en route to India. During the battle, Death Thirteen's main attack consists of using its scythe several times.

Death Thirteen appears as a special enemy faced in Arcade Mode. The conditions to fight him include using only one of the eight main hero characters (including Young Joseph and New Kakyoin) and the player cannot lose a single battle. If these conditions are completed, a "Here Comes a New Challenger" will appear on the screen, taking the player to the world of dreams to fight Death Thirteen.

In the PlayStation version, the events from the Death Thirteen story arc appear in the Super Story mode, where the player has to defeat the Stand using Kakyoin. During the fight, Death Thirteen can summon a fake Star Platinum, Silver Chariot and Magician's Red to attack the player (these fakes are defeated with one attack), as well as fly around the stage and throw its sickle.

Death Thirteen's special battle can also be unlocked on Gallery mode (Oingo and Boingo's book), but the player can only play as one of the eight heroes (including Young Joseph and New Kakyoin).

Death Thirteen's nightmare world appears as a stage in the game. The Stand is a stage hazard and attacks players who cross its path with its scythe. 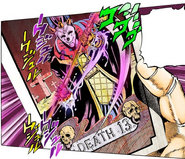 Death Thirteen attacks Kakyoin from inside the card.

Polnareff failing to hit Death Thirteen because of its ethereal body 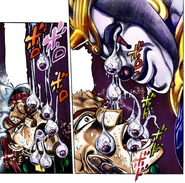 Crying eyeballs into Kakyoin's mouth so that he can't scream 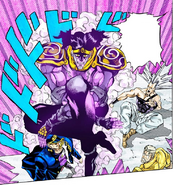 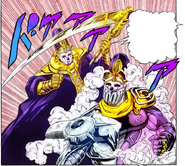 Death Thirteen can dominate everything at will in his dream world

Death Thirteen manipulates the clouds to grab the scythe 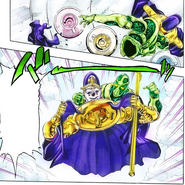