Devo the Cursed (呪いのデーボ, Noroi no Dēbo) is a minor antagonist featured in Stardust Crusaders.

An infamous Native American shaman and assassin in DIO's service, Devo ambushes Jean Pierre Polnareff in his hotel room in Singapore. He is a Stand User and uses Ebony Devil.

Devo is a tall Native American of muscular build with long dark hair. His face and body are covered by countless scars: the results of Devo letting his opponents attack him in order to make his anger and his Stand's power grows.

Devo's clothing consists of a tall coat with torn off sleeves, no undershirt, gloves that nearly take up his entire forearm, blue jeans, and boots. In the anime, Devo's coat receives a design on either side based on the patterns commonly seen in Native American clothes.

At first, Polnareff believes Devo to be a complete idiot, since he was hiding in the fridge of Polnareff's room and left all the drinks outside above said fridge, making himself easily detectable. But Devo pretended to be sloppy to be detected by Polnareff and get hit by his Stand. He is also extremely sadomasochistic, taking blows with ecstatic joy while planning to kill his victims in brutal ways. Through the control of his doll, he is revealed to be more psychotic and perverse in torturing his victims, but is also cowardly when put in a critical situation.

Devo's Stand is Ebony Devil with which he may remotely possess inanimate objects, such as a puppet, as an indirect means of attack after grudgingly sustaining injuries from his attacker; effectively "cursing" them.

According to Devo, his Stand represents the Devil Tarot Card, which represents confusion and unluckiness. Everyone who met Devo before had the unluckiness to be "cursed" by him and killed without even knowing why. demonstrating how unlucky they were to cross his path. When Polnareff first encounters Devo he is initially confused by Ebony Devil's lack of reaction to his attack and Devo's stupidity. This confusion is further aggravated by Devo's happiness for being hurt by Polnareff and Ebony Devil's mischievous behavior in their battle.

The Devil card can indicate any sort of addiction or obsession, something with which we can tend to get "carried away" to the point of losing control over our actions. In other words, it signifies self-bondage to an idea or belief which is preventing a person from growing or being healthy. Should "The Devil" represent a person, it will most likely be someone addicted to money and power; one who is persuasive, aggressive, and controlling. Devo fits exactly in this description: He has killed numerous people just for money and persuaded every one of them to attack him before murdering them.

Prior to allying with DIO, Devo was already known all over the world as a lethal assassin hired by numerous figures in the criminal underworld. Having met Devo at the time, explaining Devo's method of assassinating his targets by having them make the first move, Muhammad Avdol explains no person who seen Devo's Stand lived to tell about it. This leads many ordinary people to believe that Devo curses his victims to suffer a horrific death, hence his moniker.

Arriving in Singapore ahead of the Joestar Group, Devo hid away within a fridge in the hotel room that Jean Pierre Polnareff was taking. When Polnareff noticed the removed alcoholic beverages, he deduced Devo's presence and forced the assassin to reveal himself. Devo did just that, activating his Stand and having Silver Chariot land the first blow at the cost of his left eye. In horrific pain as his Stand quickly possessed a doll unseen, Devo sadistically curses Polnareff to suffer an agonizing death before falling off from the balcony. But in reality, Devo escaped to the bathroom on one of the lower floors and remained in a stall to act out his curse through his Stand-possessed doll.

Ebony Devil manages to tie Polnareff under the bed so that Silver Chariot would lack its user's direct eyesight while killing a hotel employee. The doll proceeds to spill the alcohol over the floor and on Polnareff with the intent to use a malfunctioning hair dryer to either burn the Frenchman or electrocute him. However, Polnareff shattered a mirror during the fight and the reflection of its fragments to finally counterattack Devo's Stand with a clear view. Once freed, Polnareff asks for information about J. Geil, but Devo refuses to talk and dies of horrific mutilation as Polnareff brutally destroys Ebony Devil and its vessel.

Devo is one of the many bosses featured in the game. In the game, Devo actually attacks the group in India although he still ambushes them in a hotel.

The group encounters Devo when they enter their hotel room and Devo flies after a brief battle declaring that his grudge will fuel Ebony Devil, much like the original manga. This fight directly features Devo and Ebony Devil. Afterward, the group is attacked by Ebony Devil possessing the doll for a second fight and the doll will eventually flee. However, the group will be attacked a third time and defeat Ebony Devil for good.

Afterward the group can go check the bathroom and take the Roof Key from Devo's corpse.

Devo (called D'Bo in the English version) functions mostly the same as he did within the manga. He ambushes the Joestar party during their stay in Singapore by hiding in their refrigerator, but he is defeated in the storylines of all the main characters.

Devo also has his own storyline, in which he is promised one-hundred million dollars by DIO for the defeat of Jotaro and his companions. He kills one hero after another until he finally slays Jotaro himself.

Devo, wanting to collect his grand reward, travels to Dio's mansion. There he meets Vanilla Ice, who proceeds to question the Shaman on his exploits. Devo, who has become smug with all of his recent success, becomes annoyed with Ice and threatens to kill him if he does not take him to DIO. Devo kills Ice in the resulting battle.

Afterward, DIO is so impressed with Devo's power that he offers him even more money, in exchange for the Shaman's permanent servitude. Devo refuses the vampire's offer and kills him, and becomes the most widely respected (and feared) kingpin in the underworld afterward.

Devo is one of the most unique characters in the game. While most characters with an Active Stand have their guardian immobilized in front of them, Devo's doll is allowed to roam freely across the battlefield when activated and lays dormant on the ground when it is not.

Aside from directly controlling his Stand, Devo can also order Ebony Devil to lunge at his opponent once, leaving him free to attack with his main body while they are distracted. This allows clever players to lure their opponents between Devo and Ebony Devil, and pincer them between a deadly flurry of attacks.

Despite all of these interesting advantages, Devo has several key weaknesses that need to be compensated for. While he is controlling Ebony Devil, he is completely vulnerable and will take massively increased damage if his main body is attacked while he is stationary. Also, since Ebony Devil only moves when he is controlled, the opponent can easily keep his distance or push Devo away from his Stand, cutting off his line of support; Ebony Devil by this proxy also requires more effective positioning to avoid any attacks landed on it (which inflicts indirect damage to Devo), as it still counts as a normal extension of himself like all standard Stands.

Devo is considered to be a solid mid-to-high tier character in the metagame, and despite requiring some complex planning and thought to use most effectively, is a very powerful and rewarding character to play. 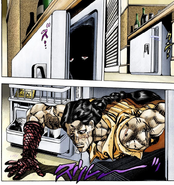 Devo's first appearance, coming out of the fridge 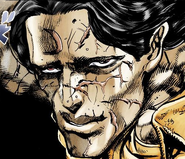 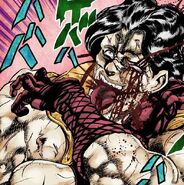 A bloodied Devo from Polnareff's attack

Devo's death after his Stand is completely sliced by Silver Chariot
DevoAnime.png
Close-up of Devo

Devo coming out of the fridge

Devo being stabbed by Silver Chariot

Devo's portrait from Heritage for the Future

Devo in Heritage for the Future

First cutscene in Devo's Heritage of the Future story mode

Devo, outside the hotel in Singapore, vows to curse the Joestar group to their deaths 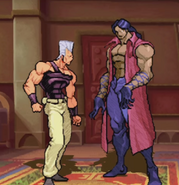