Diego Brando from Another World

All Star Battle (Voice only)
Eyes of Heaven
(Playable)
For the original version of Diego, see Diego Brando.

This Diego is introduced to the "root world" of the Corpse by President Funny Valentine after the death of the original. He is a racer from a similar Steel Ball Run happening in another parallel world. As a final precaution, Valentine had tasked this Diego with coveting the Saint's Corpse in his place, should he be defeated by Johnny Joestar. After stealing the Corpse, Alternate Diego ambushes Johnny in the final stage of the "root world" Steel Ball Run, once the latter tries to pursue him.

He is a Stand User like his original counterpart, but unlike the original, due to the Saint's Corpse only existing in the "root world," does not wield Scary Monsters. Instead, this version of Diego possess the time stopping Stand, THE WORLD, the true Stand of all Diegos.

The second Diego is virtually identical in appearance to the first. He is a young man of below-average height and slim to medium build. He has light hair, dark eyebrows, and light, bold eyes.

He commonly wears an equestrian helmet with the letters "D", "I", and "O" mounted on bending pins emerging from a small ribbon tied at its front, a turtleneck jumper patterned with a diagonal grid, light, mid-forearm-length gloves, light, wide-legged breechesW, and tall, dark riding boots.

The Diego Brando from Another World is much crueler than the original Diego, driven purely by the goal of using the Corpse's power for himself. Alternate Diego is shown to be more than willing to sacrifice innocent people for his own sake by using them as human shields and mockingly berates Johnny for accidentally killing them, showing no remorse himself.

During the final stage of the race he attempts multiple times to kill Johnny in inventively violent ways such as by throwing knives during stopped-time or using matches to burn him alive.

The second Diego's Stand, THE WORLD, is almost identical to DIO's The World: A powerful, humanoid Stand capable of stopping time for ~5 seconds.

Differing slightly in appearance, this Stand replaces hearts in its design with "D" emblems (e.g. on its knees), sports clocks on its shoulders and hips, and lacks the gloves/knuckle plates on its arm braces as well as a belt. It possesses a much slimmer physique while removing its pseudo-robotic arm pivots and knee hinges with joints under solid "skin" to appear more humanlike.

During the 8th round, the original Diego turned against Funny Valentine; but he was quickly defeated by his Stand, Dirty Deeds Done Dirt Cheap.

Later, after the final battle between Johnny and Valentine, the President tried to make a deal with Johnny, making the promise he can bring back Gyro Zeppeli (switching a Gyro from another World with the deceased Gyro). However, Valentine was planning a last trick and uses the time talking with Johnny to search for an ally in another World. With this objective in mind, Funny Valentine negotiated with this alternative version of Diego to take the Saint Corpse Parts and to kill Johnny.

After Johnny finally beats Valentine, he was surprised to see the Saint Corpse Parts were gone again. He pursued the thief only to discover he was none other than Diego Brando.

Johnny was at first surprised by the new Stand, THE WORLD, but still managed to discover the nature of its power after a few attacks. This time, Diego had the advantage of knowing Tusk's powers and Johnny's Golden Spin technique predicting his attacks and using his fans as human shields when Johnny attacked.

In his final attack, Diego used his five seconds to make a double attack: He fired a gun while THE WORLD attacked Johnny's back. Johnny was badly hurt again falling from his horse and couldn't use his new attack.

However, he had accumulated enough spin to make their final attack, using Tusk Act 4 starts climbing Diego's leg. At that time, Diego remembers what Valentine told him about the Golden Spin technique and how to overcome it; cutting his leg and throwing it to Johnny, Diego manages to beat Johnny with his own technique and mount his horse, leaving him to die.

The World of the Stars and Stripes

Moments later, Diego wins the race and fulfills the last will of Funny Valentine by keeping the body in the secret chamber of Holy Trinity.

When all hope seemed lost, Lucy Steel appears, ready to stop Diego. She exposes the head of the first Diego, killing him when the heads from both dimensions merge and obliterate one another.

Though Diego, either version, is not physically present in All Star Battle, some of his alternate's lines are present and fully voiced in the final part of Steel Ball Run's STORY MODE.

Interestingly enough, he is voiced by Takehito Koyasu, DIO's voice actor. He is referred to as "Dio" instead of Diego.

The World Diego has an unconventional standard set of abilities: Instead of a Homing Dash that all other characters have and used to charge forward, Diego summons THE WORLD at mid-range to take opponents by surprise and knock them down with a chop; In place of a Powerful Attack, Diego summons THE WORLD to throw five knives forward in a fanning fashion; In place of a Takedown Attack, an unblockable strike used against guarding opponent, Diego pulls out a revolver and fires a singular, high-damaging shot that also deals massive damage to guard (an opponent's guard will break using only two bullets). This causes The World Diego to have a unique basic playstyle outside of his special skills.

As a Mounted Fighter, The World Diego is able to switch between riding atop Silver Bullet or moving on foot. Also, as a Stand User, he is one of many characters with wildly varied abilities that grant him uniqueness in battle.

The World Diego interacts in a special manner with larger stage objects in that he can trap them with barb wire, which will paralyze opponents that get too close and leave them open to further attack. While this is a simple style of trap by itself among playable characters, Diego can then create a larger trap: if he traps two stage objects within range of each other that have a direct line between them, the two will automatically link their barb wire together, creating a long trap extending between the two.

He is paired with Part 4 Jotaro Kujo in the Eyes of Heaven Tournament, having been placed in the F Block series of battles to be incorporated into the main Tournament. They defeated Josuke Higashikata (JJL) and Narciso Anasui in the first round but were eliminated by Bruno Bucciarati and Trish Una in the second. 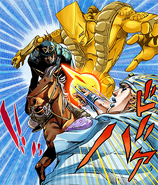 Diego and THE WORLD charge at Johnny

The return of the time stop

Another Diego Brando's render in Eyes of Heaven 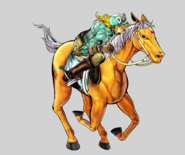 Diego pulling out knives during his DHA, EoH

Diego performing a pose with THE WORLD during his DHA, EoH 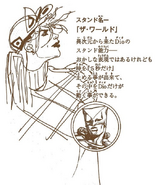