Chapter 36 - The Three from a Faraway Land, Part 1

Chapter 38 - The Three from a Faraway Land, Part 3

Dire is a Hamon disciple under the Hamon Master Tonpetty, and is a very close friend of Will Anthonio Zeppeli.

Dire is a very muscular mature man who has chiseled features and has light hair and an oversized flattopW. He wears a light leather armor over cotton clothes.

Dire is portrayed as a fierce but honorable Ripple User and fighter. Upon meeting Jonathan, he tests Jonathan's fighting ability at countering an imperfect Thunder Split Attack, and later asks Jonathan that he lets him fight Dio one on one to avenge his friend Will A. Zeppeli. Even in death, Dire is determined, taunting Dio one last time by sending a Ripple-infused rose into the vampire's eye.

Dire has shown incredible mastery of Hamon. He has complete control of his body and its speed, to the point of making enemies view him as blurred when moving. He manipulates his speed to look slower than he actually is, a technique to make enemies over-confident and eventually lower their guard. He also is able to infuse objects with the Hamon and can use it, oddly enough, after getting decapitated.

Dire was a good friend of Will Anthonio Zeppeli, who trained with him and Straizo to be Ripple masters under Tonpetty. When Tonpetty received a letter from Zeppeli revealing the location of the Stone Mask, Dire joined his master and Straizo on their way to help him.

Dire first introduced himself after suddenly attacking Jonathan, where Dire used his Thunder Split Attack against him. The Ripple user then revealed that he only attacked Jonathan to test his strength and see if he really was Zeppeli's friend. To prove he came to help, Dire gave Jonathan the letter Zeppeli wrote.[2]

Before Dio Brando and Jonathan had their last fight, Dire fought Dio to avenge Zeppeli. However, even Dire's best attack, the Thunder Cross Split Attack, didn't stand a chance against Dio's Freezing PP, which completely turned his body into ice and then shattered it. Dire, now only a head, was able to use his last ounce of Ripple energy to shoot a rose into Dio's eye. For that, Dire's head was turned into ice as well and destroyed.

Dire appears as a playable character in some chapters and Extra Mode. His movement consists of mainly normal punches and kicks, with his special Hamon move being Thunder Cross Split Attack (with two variations; one where he attacks only once if the Hamon gauge is not fully charged, and another where he follows up with a flurry of punches.) He can also throw Hamon-charged roses and dodge attacks in a similar fashion to how he controlled his body speed in the original story. 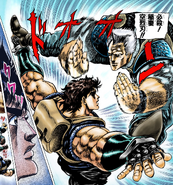 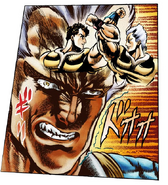 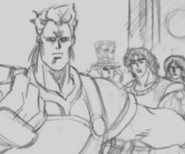 Dire As He Appears In The OVA's Timeline Videos