Serving to establish the existence of a sort of multiverseW, D4C is uniquely powerful within the series.

D4C has a humanoid form with large, upright horns that somewhat resemble the ears of a leporidW; a masked mandible, and a light body lined by an almost unbroken seam or trim. It's designed after the image of leather being stitched together, like on a baseball.[2] Under its brow, its eyes appear to emote a cold gaze.

After a late encounter[3] with Gyro Zeppeli, along with Valentine, D4C's appearance changes drastically as a result of Valentine's rapid aging at the hands of Gyro's Stand, losing a layer of its garb/armor/covering, including its horns. Even after Valentine recovers his health, D4C keeps its new form.

Dirty Deeds Done Dirt Cheap is baby blue and pink in all media featuring it.

D4C expresses no particular personality. However, representing Valentine's spirit across all dimensions, passing between a number of his bodies and linking each to the "root world" of the Corpse, D4C's abilities lend it peculiar depth.

D4C is among the most powerful Stands in the series. In its default form, it is a close-range Stand with above-average strength and speed. It is able to punch a grown man away violently[4] ,With its most impressive showing of strength being when D4C came out of Hot Pants' side and impaled her. D4C was also capable of rivalling a transformed Diego in speed.[5]

Although still exploring its full potential, Valentine is adept and creative with its powers.

Valentine travels by being closed between two objects, shown first by putting himself between a chair and the ground.[6] Liquid materials, such as water count as objects as well,[5] and even dust or steam. Valentine only needs an infinitesimal part of himself put between two objects to be able to hop between dimensions. Following that, Valentine may reappear from anywhere, like emerging from someone's back,[4] presumably by affecting objects in a neighboring dimension. One of the early facets of this power was that Valentine was impervious to projectiles as the hit body part would transform simply into a hole, however, this was then left out after its initial usage.[7]

Valentine can also pull other people or items to other dimensions by forcing them between two objects or into the object he uses as a portal;[4] for instance he can slam a door on them while they are backed against a wall. However, as no two versions of the same person or thing can co-exist in the same dimension, one of them will have to go back into their own. If not, and if they get too close to one another, both will crumble, splitting into Menger spongesW before obliteration,[8] potentially causing an explosive reaction that may harm those close by.[9] This rule does not apply to Valentine himself. Valentine can also only partially drag people into a new dimension, immobilizing them inside an object.[4]

Diego Brando has demonstrated that people other than the Stand User can pull people to other dimensions if he reuses the same objects that were used to drag them between dimensions.[8]

It is explained that between dimensions, gravity as a force is able to persist with Valentine when he hops between dimensions. This keeps him from breaking into pieces and becoming scattered across the different worlds.[10]

If Funny Valentine is injured, he can hop into another dimension and transfer his D4C to this world's Valentine.[8][11] Said Valentine acquires the memory of the previous Valentine and becomes the 'Root Valentine' by virtue of now possessing the Stand, but his consciousness remains different from that of the previous owner. Nevertheless, since each Valentine is dedicated to gathering the Corpse Parts and has the same personality, the differences are unnoticeable. Furthermore, he can summon any number of alternate selves to a target dimension in order to outnumber his opponents.[5] These Valentines do not have D4C's of their own however, this Stand seemingly being wholly unique to the 'Root World', the single universe where the Corpse resides.[1]

During early chapters, people were somehow able to see into different dimensions from different angles, but this property is never expanded on.[7]

As a blessing from the Saint's Corpse, Love Train is an overwhelmingly powerful ability that is both lethal and invincible thanks to its power over the concept of "misfortune". Only a miraculous power of the same scope as the Saint's Corpse may overpower it.

While Love Train is active, Valentine becomes effectively invincible, hiding within a pocket dimension (also described as a gap in space) delimited by a wall of light that follows him.[1][12] The wall of light, originating from Lucy's body, has the ability to redirect all misfortune that comes in Valentine's way, leaving only good fortune. The harmful energy that passes through the wall of light is sent far away from the user and is passed onto individuals anywhere on Earth as bad luck. For instance, Johnny's imperfect nail shots could be canceled and the harm manifesting as fatal accident throughout the world.[1] Because Valentine can manipulate the form of the pocket dimension as he sees fit, it can allow him to seemingly stand midair,[1] glide at high speeds or flatten himself. It is shown when he pursues Johnny and Gyro under the train tracks, and across a grassy field.[13]

Additionally, neutral objects continuously move closer to Lucy, including trees, signs, and even the oceans.[11][14] These shifts in position seem to favor Valentine. Besides being invincible to attacks while within the gap in space, D4C can make even its most insignificant attacks fatal. Any wound would quickly travel up the body until it eventually reaches a vital spot before dealing damage. A scratch or bite on the finger can become a scratch on the heart.[1] The only downside is that D4C must temporarily leave the safety of the gap in space and becomes vulnerable.

Love Train can only be used at a certain distance from Lucy, so if she is moved away from him, then he is forcibly pulled with her and must exit the wall to be free to walk around.[15]

The only known power able to break through D4C -Love Train- is the Golden Spin.

The original design of D4C

The effect of D4C on Funny Valentine 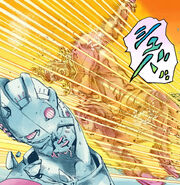 D4C as it appears in All Star Battle

Valentine and D4C's intro in All Star Battle 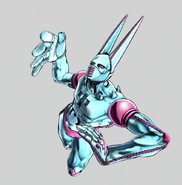 D4C as it appears in Eyes of Heaven 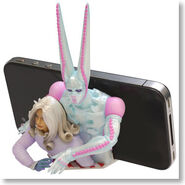