SO Chapter 59 - His Name Is Anasui

Diver Down (ダイバー・ダウン, Daibā Daun) is the Stand of Narciso Anasui, featured in Stone Ocean.

Diver Down appears as a humanoid attired with a highly stylized set of SCUBAW gear. Its body is patterned with a distinctive "D"-like symbol.

Diver Down is consistently portrayed as blue-green across media featuring it.

Diver Down is a close-range Stand which is fairly powerful in close-combat (it is able to decapitate someone with a single chop[2]), but whose strength resides in its set of abilities that allow it to easily take advantage of the environment, making Diver Down a reliable ally during a fight.

Diver Down's first shown ability is to store its strikes on any surface.[3]

When Diver Down hits something with a punch or a kick, the force of the impact is "stored" inside the object. Whenever Anasui wills it, the accumulated energy can be released outside of the object in the form of Diver Down's corresponding limb punching or kicking from inside the object.

Alternatively, Anasui can put Diver Down inside someone's body, so that whatever damage the target suffers will be transferred to Diver Down instead, protecting them from harm.[4][5] If need be, Diver Down can become a part of the person and replace a lost limb.[6]

Diver Down's signature ability is to phase through solids and then freely change their insides.

By plunging inside an object or person, Diver Down can freely manipulate their internal structure; either to destroy them or piece them together anew.[7] It can even dive into Stands to modify their structures, as when Anasui grafted a frog's brain into Yo-Yo Ma.[8]

Through this ability, Anasui can create complex structures like spring traps[9] or freely change the whole form of the object, for instance displacing the opening and neck of a bottle along its side[10] or changing someone's bone structure and muscle into springs.[4] Diver Down can forcibly remove harmful but impossible to sever objects like parasitic plants in Jolyne's body[11] or do the reverse and embed foreign objects inside the body, like chocolates to change the shape of Anasui's face.[12]

Diver Down along with Anasui as seen in All Star Battle

Diver Down in All Star Battle

Diver Down in Eyes of Heaven 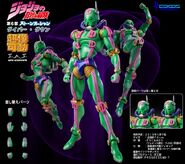