View source
watch 01:36
We're Getting Mutants in the MCU - The Loop
Do you like this video?
Play Sound
SPOILER WARNING: Part 8 Spoiler details may follow.

An acquaintance of Jobin Higashikata, Dolomite is a Rock Human whose body is partially destroyed. Upon Jobin's request, Dolomite helps him retrieve the Locacaca after being lured by living proof of the Locacaca's next stage of equivalent exchange. He is a Stand User and controls people through his Blue Hawaii.

Dolomite was originally a handsome man. Wearing an undercut, the hair on his sides was shaved down whilst the hair on his crown was pulled to the right of his forehead. He wore an exotic striped jacket over a dark, long-sleeved shirt.

After his body was destroyed, Dolomite's appearance drastically changed. His entire body and skin took on a more rock-like appearance, with a rougher complexion and cracks in his skin. Dolomite's arms and legs are reduced to stumps while his teeth are broken and cracked. His eyes are duller and a strange marking exists above his nose, in the form of a triangle with a small circle above it. His hair has grown out much longer and is unkempt, hanging over his shoulders. As for clothing, he still retains his exotic jacket but nothing else.

Little is known of Dolomite's past personality. In the past, Dolomite was an easy-going man that cared for another woman.

Despite the destruction of his body, his mind is relatively sane, although he does display animalistic behavior at times. He is also extremely nihilistic, likely due to the fact he cannot participate in society any more.

He is not interested in the Locacaca operation, and whilst commenting that it will be "lonely", he does not show any grief to his fellow Rock Humans. The reason given as he has nobody left, he can not participate in an equivalent exchange process. He was quick to change this view after Jobin gives the possibility of an equivalent exchange like Josuke.

Dolomite seems to be fond of fried chicken, as it is the food Jobin used to lure him out.

Dolomite's Stand has the power to control humans from afar to attack a particular target so long as that person has touched something belonging to the user, or the blood of one of the victims.

Years ago, Dolomite originally was a normal-looking Rock Human that loved an unknown woman fondly. The woman, apparently blind, wandered into a power plant and Dolomite rushed after her. He pushed her out of the way in time, saving her. However, the power pylons electrically shocked him to such a severe degree that it blasted apart his arms, legs and teeth. The last thing Dolomite saw was the woman wandering away. Over the years Dolomite ate several animals, causing the police to search for him.

After an unknown amount of time, Dolomite settled down near a pond located at a shrine; living as a hermit and becoming unaware of the events happening to his Rock Human brethren. After witnessing Josuke Higashikata kill Tamaki Damo, Jobin goes to the pond and summons Dolomite using fried chicken. Jobin informs him of what happened to the Locacaca Smuggling Organization managing the Locacaca trade, and asks Dolomite to help him acquire a Locacaca so he can perform equivalent exchange. Interested, Dolomite uses his Blue Hawaii to infect the people of Morioh and try to attack Josuke.

While Blue Hawaii relentlessly pursues Josuke, Dolomite stays idle in his pond. Josuke finally beaten, and instructed to return to Dolomite immediately, the Rock Human takes his mobile phone and interrogates him to know who Josuke was going to meet, to which Josuke answers that he was to meet with a plant appraiser. Investigating the phone, Dolomite confirms Josuke's statement; declaring himself the victor, he orders Josuke to drown himself at the bottom of the pond, but Yasuho intervenes and bashes his head with a metal bar. Limbless, Dolomite has no way to defend himself and is forced into a mud pit when Yasuho interrogates him about his accomplice and the Rock Human tries to stay silent. Defeated, Dolomite releases his control over Josuke and reveals that it was Jobin who asked him to attack Josuke.

Dolomite then comments that Josuke and Yasuho are way over their head by involving themselves with the Locacaca business, especially since a new species of the fruit has emerged. After his confession, he is subdued by Yasuho and Josuke with his current fate unknown. 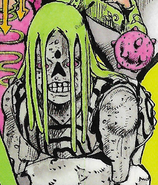 A younger and happier Dolomite

Permanently disfigured by a power plant 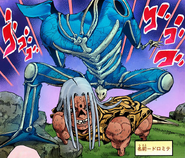 Dolomite with his Stand