Has never been employed [3]

The character featured in this article is sometimes referred to as "Donatello Versace".

Donatello is one of DIO's illegitimate sons, and the half-brother of Ungalo, Rikiel, and Giorno Giovanna. When he fatefully meets Enrico Pucci, he awakens his Stand, Under World, and battles Jolyne Cujoh and Ermes Costello in Orlando.

Although he cooperates with Pucci , he gets fed up with him often and believes Pucci thinks he is superior to him, and later goes on to betray him.

Donatello Versus has short light hair with a black stripe in the middle which extends to the back of his head in the shape of a 'Y'. He has long sideburns which point toward his mouth, blunt bangs that cover his entire forehead, and two ponytails.

Versus wears a choker necklace that has a spiral pattern in the center. He sports a deep V-neck long-sleeved shirt along with matching pants. The front and sides of his shirt and pants have an excessive amount of thick loops. He has shoulder straps going through three front loops on his shirt, as well as two more straps from his belt which travel downward through the front loops on his pants.

Versus holds a grudge against the world and society in general. He has a strong desire to become happier than anyone else. In terms of similarities to his father DIO, he has inherited his personality traits such as selfishness and ruthlessness.

Under World allows Donatello to revive past events from Florida's soils and imprison people in them, forcing his victim to experience whatever happened.

Donatello Versus was raised by his mother and stepfather, a man who "did nothing but tell long stories of his womanizing ways," who his mother married at an unknown point in Versus' life.

After running away from home at age 13, a pair of baseball shoes fell from the sky onto his head. He put them on but was soon arrested and taken to court, where he learned the shoes belonged to real-life Seattle Mariners outfielder Ichiro Suzuki, originally to be given to disabled children as a gift.

Upon hearing the boy say (truthfully) that the shoes fell from the sky, the judge flew into a rage, disgusted by the fact that a 13-year-old boy would stoop so low as to steal from children less fortunate than himself. Versus was quickly deemed guilty on circumstantial evidence of stealing the shoes and was sent to a juvenile detention facility for six months, Versus' mother and stepfather not objecting to his incarceration.

However, four months after Versus' arrest, the true criminal confessed. The criminal was a professional burglar, who, after stealing the shoes, was afraid that he would be caught because the shoes were so famous, and dropped the shoes down a ventilation shaft on top of a building to get rid of them.

When word reached the facility he was being held in that he had been wrongly condemned, Versus had already been physically and emotionally drained, and he was almost too weak to even move because of a string of strange events that had occurred over the course of his incarceration. For instance, Versus tripped while walking in the field of the facility and his hand was impaled by a knife that had been buried there sometime before. Versus would find out the next day that the knife belonged to a corrupt guard who had been hiding it, presumably to threaten other inmates. As a result of this, the guard bullied and beat Versus regularly. His hand wound was finally treated two weeks after the fact, but worms and pus still infested the wound. Possibly as a result of this, Versus fell into a fever and nearly died. Another occurrence was that Versus urinated on a decrepit wall that crumbled and revealed the skeleton of a long-dead woman.

However, during 2011, Enrico Pucci took Versus and two of DIO's other sons, his half-brothers Ungalo and Rikiel, under his wing and helped them develop their Stand powers.

After failed to eliminate Ermes Costello and Jolyne, Versus betrayed Pucci by stealing Weather Report's Memory Disc using his Stand, Underworld. An angered Pucci demanded Versus to give the disc back to him, panicked of Weather regaining his memories. However, it's too late and Weather was later revealed to be in fact Domenico Pucci, Enrico's twin brother.

A cornered Versus remarked that since Weather has regained his old memories now, he wouldn't be an ally to neither Enrico nor Jolyne. Versus then escaped from the scene and decided to steal Jotaro Kujo's Disc from Emporio, believing it's what Pucci had been looking for to achieve "Heaven." However, he was quickly defeated and forced to drive to locate both Weather and Pucci.

Versus' final moments in the manga would come when Jolyne and Anasui attack Pucci while Whitesnake activated its illusory powers. However, Anasui realizes that he attacked Versus instead of Pucci, killing him.

Versus appears in JoJo's Bizarre Adventure: All Star Battle as the guide for the support items shop in Story Mode, using his Stand ability to dig up the player's support item of choice at the cost of gold. 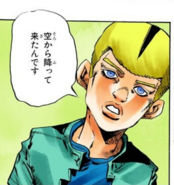 Donatello in his younger years