A geologist by trade and also working as one of President Funny Valentine's henchmen, Dr. Ferdinand ambushes Johnny Joestar and Gyro Zeppeli alongside a transformed Diego Brando in the Rocky Mountains to take the Saint's Corpse's eyes from them. He is a Stand User and controls hordes of dinosaurs through his Scary Monsters.

Dr. Ferdinand is a man with blond hair - most of which being hidden under a thick, beige hood - that is parted on the left. He has long bangs that are arranged on the right side of his face.

His outfit's most notable feature is the several roses near the top of his long main garment, which appears to be only slightly shorter than his coat and resembles a dress or tunic. He dons a long, hooded coat, gloves, kneepads, pants and boots. Everything but the coat and kneepads appears to be the same colour (depicted as deep red in digital colour).

He looks somewhat androgynous and seems to be wearing mascara - particularly below his eyes - and perhaps lipstick.

Dr. Ferdinand was a geologist and a paleontologist with a very flamboyant personality. For him, the most important thing in the world is respect; he has a great respect for the planet, to the point he'd get senselessly furious should he see somebody spitting on the ground or littering. He's convinced that Earth brings prosperity only to those who respect the soil and has come to believe that dinosaurs, the once undisputed rulers of the world, died because their small brains couldn't understand this basic ideal.

Dr. Ferdinand is also the first Steel Ball Run antagonist to be truly devoted to Funny Valentine, and not just a mercenary. He tries to obtain the Saint's Corpse, as he believes the completed body would bring not only respect and prosperity to whoever obtains all the pieces, but true power and an eternal kingdom. He plans to recover them for the President, the only one who can actually exploit this power for the glory of a nation.

Ferdinand uses Scary Monsters to turn Diego Brando into a dinosaur and have him affect an entire village. By directing orders to Diego, he is able to command an army of dinosaurs to do his bidding.

Two years before the story, Ferdinand obtained his Stand while searching for the Devil's Palm.

During the course of the third stage of the Steel Ball Run, Diego Brando is attacked and severely injured by an unknown enemy. He recovers rather quickly, however, and catches up with Gyro Zeppeli and Johnny Joestar. The three decide to spend the night in a small village on the rocky mountains.

During the night, Diego attacks the protagonists, transformed into a dinosaur. Not only are his physical abilities enhanced, but he's also able to turn every living being he bites or scratches into a dinosaur as well, thus rapidly gathering a dinosaur army by transforming the village men and animals (including some mice).

Gyro and Johnny attempt to escape, regardless of being easy detectable by the dinosaurs who can sense movement and can track the smell of their clothes, now wet because of a small dinosaur's urine. Unfortunately, they are infected by Diego as well, though Johnny is able to resist his power because of the corpse.

They decide to recover the new corpse part in order to save Gyro from transforming as well, but Diego manages to stop them and recover the Saint's eyes. It is only then that Dr. Ferdinand shows up, revealing himself to be the real Stand user and stating that he attacked Dio and made him the leader of the group of dinosaurs. He talks to Johnny about respect and prosperity, berating him for littering and spitting on the ground. He is shown to believe that the Corpse will bring prosperity.

He orders Diego to retrieve the left arm from Johnny, but the latter has briefly abandoned it, using his partial transformation into a dinosaur to jump at Dr Ferdinand. Johnny strikes him with his tail, recovering the Saint's eyes. Whilst being pinned down by dinosaurs, he passes the eyes to Gyro.

Dr Ferdinand asks Dio to finish off Johnny, but they are both struck by a Steel Ball. Gyro has returned to his human form, with the Saint's eye. He also gains a new ability, thus allowing him to injure Dr. Ferdinand. After a skirmish, Ferdinand hides inside one of the dinosaurs he sends at Johnny and Gyro. He is quickly disabled, and Scary Monsters is neutralised.

With Dr. Ferdinand's power inactive, the dinosaurs revert to their original forms, including some pumas: the mountain lions, angered, pounce on Dr. Ferdinand and devour him.

Diego, now free of Ferdinand's control, manages to escape with the left eye of the Saint, along with Ferdinand's abilities. 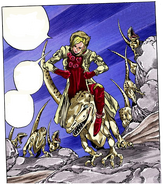 Stealth attacking from inside one of his creatures