Ebony Devil's base design is based on the ancient Sardinian bronze statuettes known as "brunzeddos", specifically "The Warrior". It has four arms, an alien looking head with four eyes and two long horns. It is completely clad in armor, it also wields two shields, holds a short sword in its hand and carries a bow.

The doll it possesses is stated by Araki to resemble an African shaman and is distinctive and primal in appearance.[1]

Ebony Devil itself is consistently portrayed as being black across all media, befitting its name.

Ebony Devil is operated remotely, relying on its user's sadistic personality to kill its target. Its personality was inspired by Chucky from the film Child's PlayW, as well as other horror movies.[1] The Stand mimics Devo's maniacal and vulgar tendencies, frequently laughing while trapping its opponent and devising new torture methods.

It represents the Tarot Card The DevilW, which symbolizes confusion and misfortune.[2]

Ebony Devil is risky in that Devo must be injured by his targets first in order for the Stand to work. However, when set up, it can then ambush its victim and proves to be elusive.

Ebony Devil's power activates once Devo is hit by his foe. It then grows more powerful depending on the hatred Devo feels towards his enemy relative to the amount of damage he's received.[2]

Ebony Devil can then transfer itself to something physical in order to attack, preferably a doll in its unique appearance.[3] It will begin to attack its foe, starting quietly and escaping its opponent's notice, before causing more and more misfortune as necessary.[4]

Much like other remote Stands, Devo can control the doll from a distance and can see through its eyes.[1] In addition, any damage reflected on the possessed object is reflected on Devo; when Jean Pierre Polnareff stabbed the doll, the user was killed.[4]

It also seems that any weapon which the possessed object wields also becomes a part of the Stand, as the doll manages to injure Silver Chariot (and therefore Polnareff) using a straight razor, a spear, and even a broken bottle.

Devo summons Ebony Devil to against Polnareff and Silver Chariot 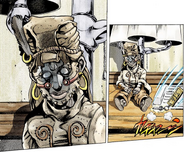 Ebony Devil (Doll form) kills a waiter of a hotel 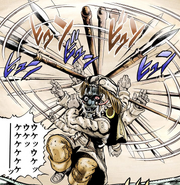 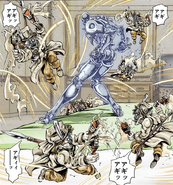 Ebony Devil jumping around the room 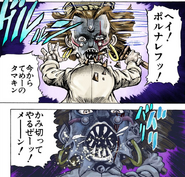 "Hey! Polnareff! I'm going to bite your dick off!" 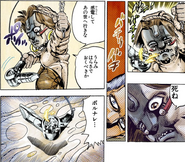 "I will cut you everywhere but there!"

Community content is available under CC-BY-SA unless otherwise noted.