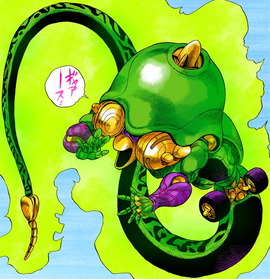 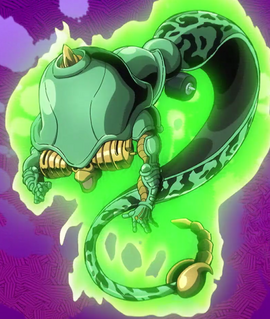 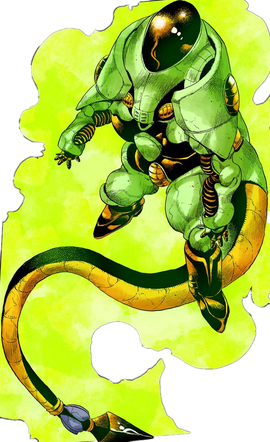 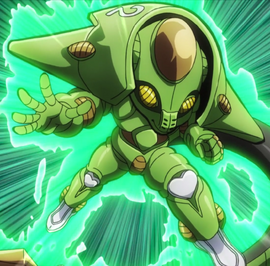 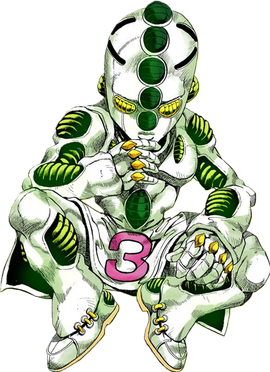 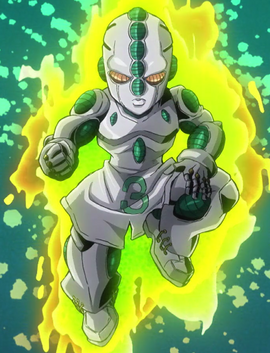 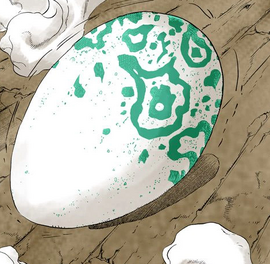 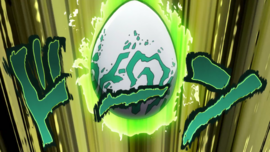 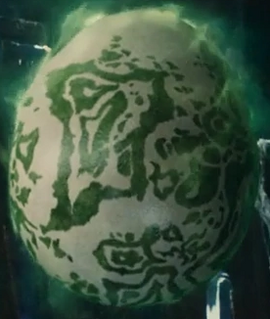 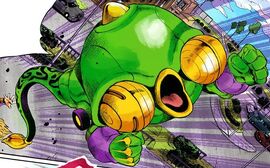 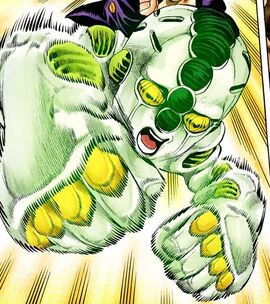 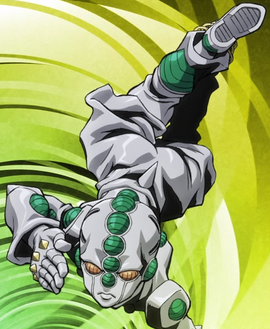 Echoes (エコーズ, Ekōzu) is the Stand of Koichi Hirose, featured primarily in Diamond is Unbreakable and appearing briefly in Vento Aureo.

Echoes first appears as a large egg whose bottom is covered in swirling spots.

Echoes was born in extremely unusual circumstances. Koichi was stabbed by the Arrow, but due to not having the necessary fighting spirit, should have died; however Josuke Higashikata healed him with Crazy Diamond before he could die and thus Koichi survived, acquiring a powerless Stand in the process.

It is most commonly portrayed as being white with green spots.

It makes its first appearance during the battle against Keicho, though as an egg, it is immobile and cannot do anything.

Koichi calls on it in his battle against Tamami, during which it develops into ACT1.[2]

ACT1 takes the appearance of a three-section larvae-like creature. Its oversized first section serves as a head and two small shelled arms are attached to it. The head is covered with a shell on top of which a spike is visible, and the face is nearly entirely covered by metallic blinkers, only leaving a small beak visible.

Its most common color scheme is green and black spots.

ACT1 doesn't have a full-fledged personality. It obeys its master's command and sometimes lets out a small growl.

ACT1 hatched from its egg during Koichi's fight with Tamami,[2] and although it was weak, its strange power easily subdued Tamami. Koichi would then use it a second time against Surface and Hazamada to fool them into thinking Josuke really pierced his own eye[3] and then fool Hazamada into taking a detour and let Josuke join with Jotaro first.[4] However, when Koichi was kidnapped by Yukako, although ACT1's long range and power allowed Koichi to contact Josuke,[5] it was too weak against Yukako's willpower. Thus ACT1 evolved into ACT2.[6] ACT1 made appearances after Josuke's fight against Akira Otoishi and Koichi. It would make a final appearance during the Sheer Heart Attack story arc, when Koichi sent it out to scout for Kira, leaving himself defenseless against Sheer Heart Attack.[7]

ACT1 is a long-range Stand. It is very weak, its punch failing to hurt Tamami,[2] and also slow. However, it has the longest range of all ACTs and can go up to about 50 meters from its user,[8] making it useful as a scouting Stand.

Echoes ACT1 can write anything on any surface or person. If it is an onomatopoeia, typically in Katakana, a sound related to the onomatopoeia in question is produced. If it is a sentence written in Kanji, the words will influence the target's state of mind. For instance, Koichi could convince his mother, who was on the verge of suicide, to stop and trust him by using the sentence "Believe in me!" on her.[9] The sound and words are said to not really be heard but to be as if they came from inside the person.[2] The sounds vary in volume, but will increase the longer the sound is active and reverberates to a person more strongly if the sound is written directly on them.

The effect can be broken with enough willpower, as Yukako dispels the writing that Koichi puts on her.[6]

Echoes ACT2 is a developed form of Echoes ACT1, gained during the battle with Yukako.

ACT2 is now humanoid, though smaller than ACT1. It is fully clad in a shell-like armor decorated with metallic striped protrusions at the crotch and other places, the most prominent piece being a large high collar fused with shoulder weights with "S2" written on the back which covers the back of the head and the shoulders. ACT2's oversized head has a now revealed face, its metallic striped eyes, nose and small robotic mouth being revealed. It still has a long organic tail with a dark belly and bright back, and a detachable kunai-like stinger.

It is generally portrayed as being green.

Although ACT2 is still physically weak, it now possesses a stronger and more versatile power than its previous form, making it more suited to direct confrontation.

Echoes' second form increases its sound abilities beyond its first form's capabilities. Echoes can write a sound effect on any surface. However, unlike ACT1, it is only able to shoot sound effects from its tail, limiting it to only one sound effect at a time. When the sound effect is touched, an effect related to the sound is produced, either affecting the person who touched it or the object which the words are inscribed on.

Enhanced Speed: Foreshadowing the speed of ACT3, ACT2 gains a massive increase in speed - fast enough to give the impression of disappearing into the air.

ACT3 is a completely humanoid Stand. ACT3 takes the appearance of a robot with the same metallic striped eyes but now human lips. Its body is covered in multiple striped protrusions mimicking human muscles and several of them form a crest at the top of the head. ACT3 also has two X-shaped holes on the sides of the head. ACT3 now possesses a cloth wrapped around its waist similar to shorts with the number 3 printed on the front and keeps its boots. Its tail is now vestigial, a single long spike protruding from its behind.

Koichi develops Echoes ACT3 during his confrontation against Sheer Heart Attack when ACT2 proves too weak to battle the Stand.

ACT3 is now fully sentient and able to communicate with its master. ACT3 speaks politely when talking to Koichi, following his orders and referring to him as Master. However, he has a tendency to suddenly curse in English, in a manner seemingly inspired by rap music. In the Japanese version, its speech is often written in katakana to underline a mechanical tone.

Echoes ACT 3 is generally presented as being white and green.

Unlike Echoes' first two forms, ACT3 has a much shorter effective range. It is extremely fast and noted to be stronger but is still no match for even a Stand like Killer Queen.

ACT3's signature ability is 3 Freeze (, Surī Furīzu), with which it applies a "freezing" or stopping effect by greatly increasing the weight of its target by punching it, typically adopting a fighting stance while joining the hands together while doing so and producing an aura. For example, Killer Queen's Sheer Heart Attack is forcibly sunk into the pavement by this ability, and, according to its user, the effects were as if there were 40-50 kilograms of weight on his left hand.

The weight increases do have drawbacks; 3 Freeze can only affect one thing at a time, and the effect ceases if the target moves more than 5 meters away from ACT3. The closer the target is to ACT3, the heavier it feels.

Echoes ACT1 appears without his Stand user, Koichi, as one of the ten characters from the JoJo's Bizarre Adventure franchise on the game.

All versions of Echoes appear as Koichi's Stand during gameplay. Different moves correspond to different Stands. A full list can be found here.