SBR Chapter 47 - The Land of Promises: Sugar Mountain, Part 3 (All dead, except one)
SBR Chapter 48 - Tubular Bells, Part 1 (Only one)
The Eleven Men (１１人の男たち, Jūichi-nin no Otoko-tachi) are an unnamed group of minor antagonists featured in Steel Ball Run.

As Funny Valentine's henchmen, they stalk and attack Johnny Joestar and Gyro Zeppeli during the 5th stage of the Steel Ball Run to take their Saint's Corpse parts. They are all Stand Users that share the same Stand, Tatoo You!

All eleven men share similar outfits consisting of a flat brim cowboy hat, a range coat, and a belt with a holster for their gun. Most of them have a pattern featuring small writing spread all over their hair and facial hair like a newspaper or a book.

Not much is known about their personality but they have an uncanny ability to act in unison. They also are ruthless murderers, patiently hunting after Gyro and Johnny then during their fight, using their comrades' corpses as shields.

All Eleven Men share the same Stand ability, named Tatoo You! It allows them to use each other's bodies as portals, allowing them to merge with each other and displace themselves.

The eleven men are hired by Funny Valentine after Sandman's defeat. They tailed Gyro and Johnny and proved to be skillful riders and gunmen. The men follow Johnny and Gyro, who are in a rush to spend all that they have gotten from Sugar Mountain, into a bar, where a shootout soon begins.[1] Though they come close to cornering and killing Gyro and Johnny, many of them are killed at the hands of the other gamblers, who Gyro gives several million dollars to kill the men.

Upon leaving the bar, Johnny sees that Gyro is becoming part of the tree that imprisoned Sugar Mountain and had to give up the last item in order to avoid the curse. Johnny seeing his friend plead continued to hold on to the Corpse Part, refusing to give up something so valuable, and at the end saw Gyro lost to the tree's curse. It was then that the last of the eleven made a trade with Johnny: a wine bottle for the ears and the right arm that Johnny and Gyro discovered. Still doubting Johnny's reasons for the exchange and expecting an attack, he then rides away to deliver the corpse parts to the President.[2]

The first of the Eleven men to die 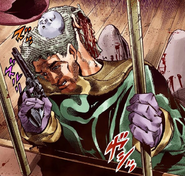 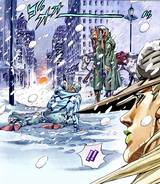 The last survivor of the Eleven Men