Empress (エンプレス（女帝）, Enpuresu) is the Stand of Nena, featured in Stardust Crusaders.

Empress is a Stand bound to its own user's blood, first appearing as a small drop of blood from Nena. Once the blood drop hits a person, the true Stand is revealed. Empress starts as a small, itching wart,[1] similar to a bug bite, that swells as it grows and eventually develops humanoid features.[2] Moreover, another similar wart can be seen on Nena's tongue[1]

When it is developed, Empress looks like a small woman growing out of the victim's flesh who possesses a two crests on her head and a shawl.[3][4]

Seemingly relayed from Nena, Empress comes off as a sarcastic, disrespectful, mocking Stand, constantly insulting Joseph (the unlucky host).[2] It represents The EmpressW Tarot Card, which symbolizes the growth of new life (hinting the nature of this Stand).

Its design is based on a rearranged Indian BuddhaW statue.[5]

Empress is a exceptional hybrid between flesh and Stand that is both dangerous and frustrating to get rid of if planted on its victim.

However, its simplicity and mediocre physical prowess allow even Joseph's Hermit Purple to defeat it.

Empress must first be planted into another person through direct contact with Nena's blood, but can otherwise be controlled by her remotely.[6]

The zone splattered with blood will develop a fleshy bud, similar in appearance to a wart.[1] Empress will then slowly and continuously grow out of the victim's flesh as long as it feeds off exterior sources relative to it's size, be it small insects, fruits, or whole chickens. Empress will eventually reach a humanoid form[3] and will constantly try to hinder, harm, or kill its host. For instance, it framed Joseph as a murderer, then, when it grew arms, bashed him with pots and tried to drive a nail into his neck.[3][4]

If Empress assimilates a victim completely, Nena can use the victim as a disguise by hiding inside of them.[4]

Empress is a mix of the victim's flesh and a Stand and takes properties from both. Thus, it can be heard by someone but will be seen as a mere wart by ordinary people,[3] and only a Stand can harm it, though being coated with tar can immobilize it.[4]

Empress grants Nena the ability to hide seamlessly inside the hollowed-out body of a previous victim and to talk with her previous voice: aside from a polyp in the middle of the tongue (possibly the organ that links Empress to the assimilated corpse), nothing can betray the presence of the user, even if the real body is much larger that the flesh "suit". 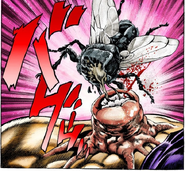 Empress as a small bud-like wart consuming a fly 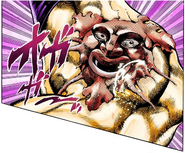 Empress after growing a face on Joseph's arm 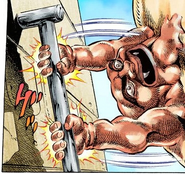 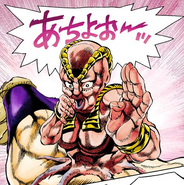 Empress as a small bud-like wart consuming a fly

Empress after growing a face on Joseph's arm 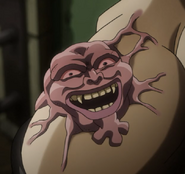 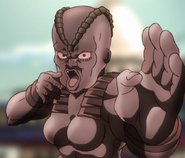 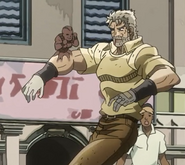 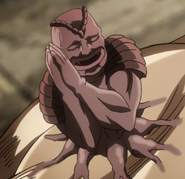