Enigma is a dark colored humanoid Stand. Its body is covered in lighter colored standards resembling question marks. Other features include dotted round eyes and heart shaped kneepads.

In both the colored manga and anime, Enigma is portrayed as being entirely purple.

Enigma is not suited for direct combat, but it's esoteric ability to seal people inside pieces of paper makes it a fearsome Stand difficult to fight and escape from.

Enigma is able to transform objects and people, including the user, into pieces of paper.[2] Once transformed, the paper must be kept folded to keep the target transformed. If the paper is unfolded, the trapped object or person is released. Anyone can unfold the paper and release something.

The condition of the object or person trapped in the paper remains the same as long as the paper is kept in one piece, but damaging the piece of paper results in an equivalent amount of damage on said object or person.[3]

For simple objects and animals, Enigma can simply apply its ability. However, to trap a person in paper, the user must discover the habits the target displays when afraid.[3] Once he has witnessed them display their habit enough to be 100% sure it's their "tell", the Stand can capture the target the next time they display their "tell".

When its ability is activated, part of the object is literally transformed into paper and the rest of it is slowly but inexorably absorbed.[4] The patterned design produced is reminiscent of the works of M. C. EscherW.[2]

There is no restriction to what Enigma can transform. Terunosuke may seal anything ranging from fresh noodles[3] to taxi cabs (including the driver),[4] fire,[5] and loaded guns.[3]

In addition, Terunosuke himself can transform into paper.[2] The transformation is instantaneous, allowing him to evade attacks, and he can freely undo it as well. When as a piece of paper, Terunosuke can hover around to reposition himself.[3] 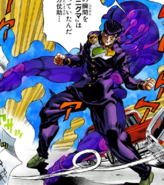 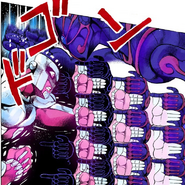 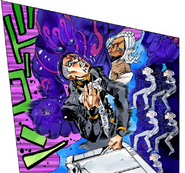