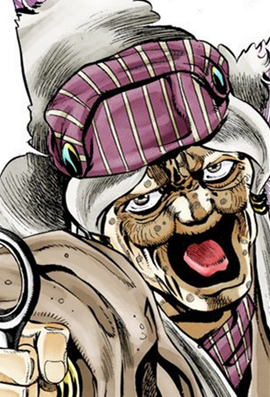 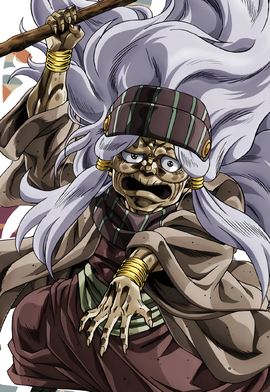 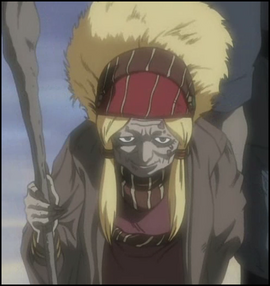 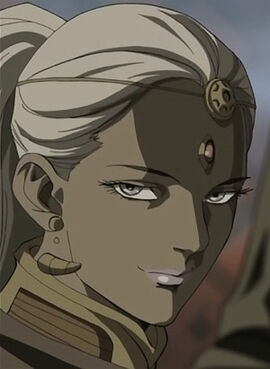 Enya holds a high station among DIO's confidantes. She is the mother of J. Geil; and after her son's death, ambushes Jotaro's group herself with the help of her fog Stand: Justice.

Enya is a small elderly woman with large, puffy white hair and two pigtails. Her wrinkled face is dominated by her large eyes and toothless mouth. She wears large baggy robes. She is seldom if ever shown with teeth; and like her son, she bears two right hands. Enya uses a long wooden club (longer than she is tall) as a cane.

When she masks herself as an innkeeper, she wraps a set of bandages around the hand on her left side to prevent it from being seen as a right hand.

When she takes on the appearance of a beautiful young woman, she has a bindi, wears a low-cut outfit that exposes her legs as well that goes with a shawl that she uses to conceal the right hand on her left most of the time.

Enya is an evil hag dedicated to DIO's cause.

As a servant of DIO, Enya is quite malevolent. Her first act is to send seven Stand Users to assassinate the Joestar Group.[2] When she uses Justice, Enya also takes pleasure in humiliating her victims, perhaps out of a will to get revenge, and has for instance forced Hol Horse to swallow his hand and then shoot himself with his own Stand,[3] but also wanted to make Polnareff lick her toilets clean.[4] Enya has a materialistic approach to life, stating that humans live to obtain what they want, be it money, sex or power.[5] She also gratuitously strikes a cat with a cane on her way out.[6]

Enya is one of DIO's most devout followers. She notably thinks the world of him, believing that with his Stand The World, he is invincible and the Joestars cannot hope to defeat him;[7] on another note, she worshiped DIO so much that she refused to believe that he ordered her execution.[8] Fascinated by the Vampire, her ambition was to stay by his side and witness his life.[2]

As a mother, Enya deeply loves her son J. Geil to a twisted degree. Because he served DIO, Enya thinks of him as a noble man and assumes that the heroes only defeated him because of a dirty trick.[9] At the same time, she seemed to either ignore or think nothing of the crimes he's committed. She shares a link with her son which makes her receive the same damage he does, and it is through this link that she learns how her son was killed by Polnareff. Horrified by the fate of her son, Enya briefly cries over her offspring's death before succumbing to rage and vowing to kill the Joestar Group herself. She also wanted Hol Horse dead as soon as she knew he didn't help J.Geil against Polnareff.[10]

Enya's Stand is Justice; a ghostly humanoid mass enabling her both to create illusions and to control her targets' movements by entering wounds in their bodies.

Though elderly, Enya can keep up with a younger adult; even approaching an equal fight with Polnareff's Silver Chariot using only scissors.

Justice is a Stand that represents the Tarot Card "Justice", which serves as a reminder that every action has its consequences and responsibilities. Enya represents this by her desire to kill everyone involved in her son's death in order to uphold justice for him against his killers, showing that the decision to kill him held serious consequences for them.

Enya is mentioned to have bought five Stand-creating Arrows from a nineteen-year-old Diavolo and used one of them on DIO to produce his Stand. Other Arrows were later passed down to individuals such as Nijimura's Father and Yoshihiro Kira.

Enya is introduced as DIO's confidante and confidently states the seven Stand Users she has sent to Asia, among them her son J. Geil, will finish off the Joestar Group.

However, all seven Stand users fail and her son is killed, causing her to cry angrily and swear revenge on the group while stating that serving DIO is the only purpose she has left. She then uses her Stand to change the desert graveyard into a large town in Multan, Pakistan, using the people as puppets.

When the Joestar group enter the town, Enya greets them and invites them to her hotel. However, she almost gives herself away when she calls Joseph Joestar by his last name on impulse and is suspected by Jotaro Kujo. Hol Horse also arrives to greet her about the Joestar group but Enya, believing Horse to have betrayed her son, stabs him in the right arm to control it and Horse ends up shooting himself with Emperor.

Enya, upon hearing Jean Pierre Polnareff come downstairs, crouches over and pretends to have collapsed. However, Hol Horse reveals that he was actually alive and warns Polnareff about Enya's attack, forcing her to attempt to stab Polnareff with scissors and chase after him with her crowd of corpse puppets in a rage. She does, however, finally have one of her puppets stab his tongue and forces him to lick the toilet in the restroom where he barricaded himself.

When Jotaro kicks the door in, Enya directs Jotaro to Polnareff's location in the bathroom, but makes the mistake of calling Jotaro by name, exposing her identity as another one of DIO's Stand users (her excuse of Jotaro having signed his name on the ledger becomes flimsy once he reveals he signed his name as "Qtaro" rather than "Jotaro"). She then assaults Jotaro with her puppets, but Jotaro blasts them all away, only failing to prevent a baby's corpse from injuring his leg. Enya gloats over defeating Jotaro due to her Stand's amorphism, but Jotaro threatens her to breathe in. Enya does this but realizes too late that Star Platinum has inhaled her Stand, causing her to faint from asphyxiation.

Enya is later brought along with the rest of the group but is subsequently assassinated by Steely Dan, who implanted one of DIO's flesh buds into her brain with his Stand. Despite Polnareff's attempts to save her, Enya dies without revealing the secret of DIO's Stand.

In the OVA her fight is different. She uses Justice to change her appearance to that of a young woman (which might've been a reference to Nena). Later she changes back to her old appearance and accompanies the group acting like an innocent old woman, but is discovered when Jotaro uses the cigarette trick he used on the Captain Tennille impostor to discover her identity as a Stand user. When defeated, the spore on her kills Enya on its own, as Steely Dan doesn't appear.

Enya appears as one of the villains in the game; however, her role and battle terms were changed, as she is the one responsible for putting the Stand Lovers inside Joseph's head (since Steely Dan was removed from the game).

Enya appears as one of the ten characters from JoJo's Bizarre Adventure who appears in the game.

Only on the home consoles' ports, Enya appears as an enemy faced on a special battle, where the player has to beat a certain number of zombies (controlled by her Stand) until she appears on the screen, which is when the player has to hit her until her life gauge reaches zero. At several points during the battle, Justice will appear looming above the battlefield and the player must jump to avoid being crushed by the Stand's clap attack. Jotaro is the character who faces this stage on Super Story mode, but Joseph, Polnareff, Kakyoin, Iggy, Avdol and New Kakyoin are also playable on the Gallery Mode.

Enya appeared as an NPC character. In Storyline, Enya often appeared around Part 4 timeline on mostly summoning the Egyptian zombies to attack the heroes, then lastly being ordered by Heaven Ascension DIO to give the 8 remaining Saint's Corpse pieces he stole from the heroes (except one which still under Jotaro's hand, due to DIO unable to steal it from him) to their allies and remaining brainwashed heroes.

Receiving psychic wounds from the blood bond with son.

Enya decided to end the Joestar Group by herself 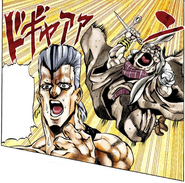 Enya attacking Polnareff from behind

Enya attacking Jotaro from behind 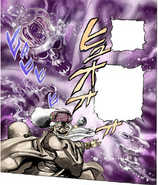 Enya alongside her Stand

Knocked unconscious after the battle against Jotaro 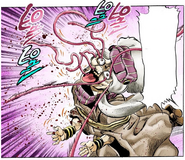 The flesh bud on her brain activating

Enya dies, loyal to DIO until the end, even after he betrayed her

Enya with DIO as remembered by Jotaro in Part 4

Enya appearing during a flashback in Part 5

Receiving psychic wounds from the blood bond with son.

Enya worries over her son's death

Showing annoyance over her plans becoming complicated by interlopers 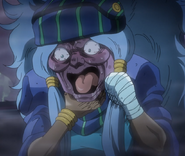 Knocked unconscious after the battle against Jotaro

The flesh bud on her brain activating

Enya dies, loyal to DIO until the end, even after he betrayed her

Enya appearing during a flashback in Part 5

Enya's sprite animation in Heritage for the Future

Young Enya's sprite animation in Heritage for the Future

Enya as she appears in JoJo's Bizarre Adventure: Eyes of Heaven 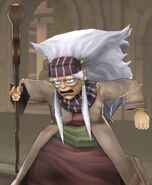 Enya as she appears in Diamond Records