Blood loss after losing both arms via Made in Heaven

All Star Battle
The character featured in this article is commonly referred to as "Hermes".

Ermes is a woman voluntarily imprisoned in Green Dolphin Street Prison in order to seek revenge for her sister Gloria Costello's killer, Sports Maxx, and soon allies herself with Jolyne Cujoh in the hostile environment that the jail is. Thanks to a certain pendant, Ermes acquires her own Stand, Kiss.

Ermes is a woman of above-average height and a fit, medium build.

She wears her hair in braided locks and multiple barrettes and has long, triangular scars approaching her eyes and lips on her forehead and chin.

Ermes also surgically altered her breasts in order to be able to hide money from their sides.

She has some bracelets on her upper arms, and has a yellow shirt.

Despite a tough exterior, Ermes is proud, loyal, and headstrong. She does not shy away from a fight and is willing to do just about anything to put herself in a better situation whether it is taking a bet that could risk her organs to even splitting her own body parts with her Stand ability despite knowing that they eventually have to be fused back, wounding her severely.

Ermes shows a severe sense of resilience, as she was still on her feet and moving around even after Marilyn Manson took her liver and survived the shared experiences of suicide attempts from Thunder McQueen. She has a good sense of justice, yet violently punishes anybody who crosses her way.

Ermes is a particularly rude woman. She speaks in a familiar tone, uses curse words frequently, and is quite violent, having a short temper leading to her frequently shouting in anger at people. Moreover, Ermes is also ready to commit violent acts, for instance wanting to kill Sports Maxx for killing her sister and being brutal when she fights others.

Ermes' Stand is the humanoid Kiss, of good melee defense and attack, and the unique ability to duplicate objects on which she plants a removable sticker.

Ermes is of at least partial Mexican descent through her immigrant father.[5] She had lived her youth in the slums, her family managing a restaurant there. Though she had a father and a big sister named Gloria, 10 years older than her, there is no mention of her mother. Gloria would eventually inherit the restaurant at the age of 20 and would receive no assistance from her little sister.

At the age of seventeen, Ermes had a strained relationship with Gloria, who wanted her to help at the restaurant. For her part, Ermes wanted a sports scholarship and to go to college. One night after another argument, Ermes ran off to the city. Unfortunately, Ermes was spotted running away by Sports Maxx, who had just killed someone. Sports Maxx was in turn caught red-handed by Gloria. In order to save Ermes, Gloria testified for Maxx' murder but was killed for it because of the police's negligence. Ermes lost her whole family and possessions. Due to lack of proof, Sports Maxx was sentenced for no more than five years of imprisonment, prompting Ermes to seek revenge by willingly and repeatedly committing armed robbery. By doing so, she was condemned to 8 years in Green Dolphin Street Prison, where Maxx was.

She first met Jolyne Cujoh when they were held in momentary captivity next to each other. Annoyed by Jolyne constantly banging her head due to her humiliation earlier that day, Ermes yelled at her to pipe down. She was amazed to hear Jolyne confess her innocence to her crime and admired her honesty. On their way to Green Dolphin Street Prison, Ermes warned Jolyne to get her hands on cash, as bribery was the quickest way to escape a lot of the harshness of prison life. In return, Jolyne saved Ermes from a brutal beating using her newfound Stand, Stone Free. Although not cellmates, the two have remained somewhat close to each other ever since.

While in prison, Ermes used money as a medium so when the janitor, Thunder McQueen, stole her money, she pursued him after being in the infirmary six times for a fever. Once she encountered the janitor, she learned that he was severely suicidal and due to his own Stand, Highway to Hell, she was forced to encounter similar experiences whenever he attempted it. While she saved him from the attempts on multiple occasions (even offering him her panties as a way to cheer him up), he still found means to kill himself but not before she split his skull using Kiss, resulting in McQueen being incapacitated and his Stand's hold on Ermes nullifying.

She later volunteers as part of a search group with Jolyne and four others in order to find two lost inmates. In their search, they encounter Whitesnake's stash of isolated Stand Discs and Foo Fighters, who was designated to protect the Discs. After a hard-fought battle, F.F. was liberated of its duties and pledged allegiance to the two.

The following days included an encounter with the gambler Miraschon who bet on a game of catch (that Jolyne and Foo Fighters couldn't relay the ball one hundred times). Ermes persuades Jolyne to agree to the bet (which she won) before Miraschon made another bet for more money. The new bet enticed Costello to not only agree but to put herself into the bet so she could get the thousand dollars. Ermes lost the bet and found herself at the mercy of Miraschon's Stand, Marilyn Manson, who took her gold tooth, money from her surgically-altered breasts, and her liver. Jolyne eventually wins the liver and money back from Miraschon.

Ermes remained in intensive medical care after her battle with Sports Maxx and does not appear again until Jolyne escapes from prison. She was one of the final members in the last battle against Enrico Pucci and dies in the struggle. All of her comrades, including herself, were left floating in the sea as they rot from Pucci's accelerated time.

After Emporio Alniño manages to defeat and kill Pucci, Ermes' alternate universe counterpart is seen being ejected from a bus for attempting to pay with a fifty-dollar bill. The counterpart feels infuriated and even wonders if the bus driver mistook her for an inmate of Green Dolphin St. Jail. She then meets Emporio and asks him for change for the bill. Afterward, she and Emporio meet Narciso Anasui's counterpart Annakiss and Jolyne's counterpart Irene, who invite them to ride with them in exchange for Ermes' money for gas. Ermes feels skeptical at first, as her older sister told her not to ride with strangers, but the coming rain forces her to give them the gas money and ride with the group. The group later picks up Weather Report's counterpart after refilling the car's gas tank.

Ermes makes her video game debut in the PS3 title. She was confirmed for the game along with Jolyne, Part 4 Josuke, and Okuyasu. She's the only non-DLC ally character from Part 6.

As one of the mass majority of playable characters in the game with the "Stand" Style, Ermes can turn Kiss on/off, changing move sets, as well as having access to the Stand Rush ability returning from the Capcom game, being able to attack in conjunction with her Stand.

While Kiss is off:

While Kiss is on:

Ermes' HHA, "I know what you're after!", is a counterattack, where she puts a sticker on herself and if hit, will kick the opponent away before Kiss delivers a massive counter combo. Ermes will take minor Sticker Damage whether or not the HHA is triggered by the opponent. The HHA's damage is increased if done while "Here's where ya stick it!" is in effect.

Ermes' GHA, "Eat this! And this! And--", starts with her taking out a sticker and lunging forward. If she lands the hit, she will slap said sticker on the opponent's head, causing it to duplicate as Kiss kicks the opponent multiple times. The Stand then switches to fists and rushes them repeatedly, gradually raising them into the air. Before allowing the opponent to fall, Ermes quickly snatches the sticker off and turns away, dealing damage as the opponent's head violently merges back into one (similar to how she killed Sports Maxx).

Alongside all playable members of Bruno Bucciarati's Gang of Part 5 (with the exception of Narancia Ghirga), Ermes is one of the only characters who activate Resolve Mode instead of the normal Rumble Mode when low on health. In this state, attacks that do not result in hard knockdowns or blow-backs no longer phase the character.

Ermes possesses one alternate costume, which is the outfit her alternate universe version wears.

Ermes was confirmed as a playable character alongside Jolyne, Pucci, and Weather Report.

As a Stand User, Ermes is one of many characters with wildly varied abilities that grant her uniqueness in battle.

She is paired with Robert E. O. Speedwagon in the Eyes of Heaven Tournament but was eliminated in the preliminaries by Narancia Ghirga and Diego Brando. 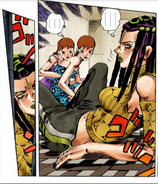 The first effect of Kiss' ability under Ermes's witness 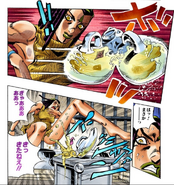 The power of Kiss

The effectiveness of Ermes' sticker 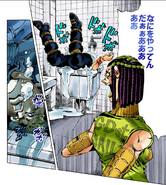 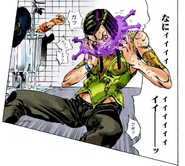 Ermes affected by Highway to Hell 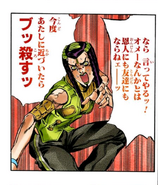 McQueen preparing to murder himself once more

Lightening up Thunder McQueen's mood with a pair of panties 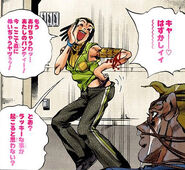 Ermes, while striking an "embarrassing" pose, offers to give her panties to Thunder McQueen

Getting pissy at McQueen 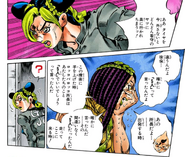 Conspicuous that more than five entered the farm 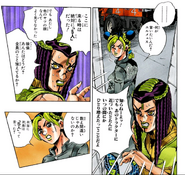 Guard departs as wristbands go off 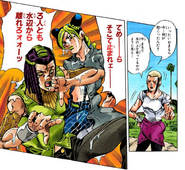 Cautiously browbeats the other volunteers 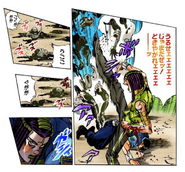 Attending to Jolyne by yelling at her 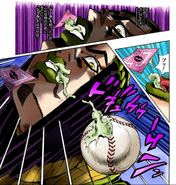 A technique Kiss can use for recovering

Money jacked by Marilyn Manson from her breast implants

The shadowing of Sports Maxx

Acted her revenge on Sports Maxx 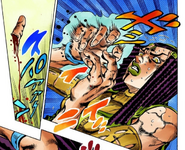 Warns her friends about the nameless force 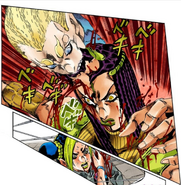 Sports Maxx nibbling on Ermes in a delirious rate 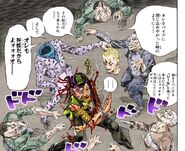 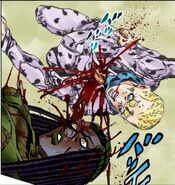 Kiss revokes a part of Ermes, which unfolds Sports Maxx 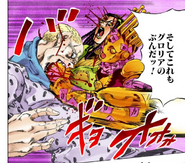 Ermes and Kiss pulverize him

Ends her revenge for her sister

Jolyne, Emporio and Ermes finally decamp off the prison

The effect of Weather Report (Stand)

Predators zooming towards their 'snail quarry' 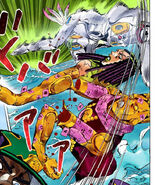 Ermes' render in All Star Battle

Ermes Costume A in All Star Battle

Ermes' render in Eyes of Heaven 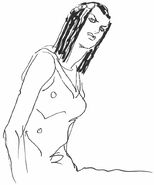 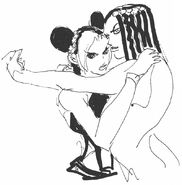 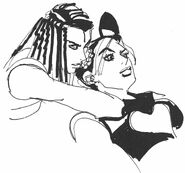 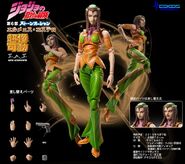 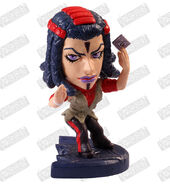