Escape from JoJo's Bizarre Amusement Park (ジョジョの奇妙な遊園地からの脱出, JoJo no Kimyō na Yūenchi kara no Dasshutsu) was an escape gameW-styled summer 2017 attraction that was held in Tokyo, Osaka, and Kumamoto, Japan.

A collaboration event between Diamond is Unbreakable and Tokyo-based company SCRAP, the "Real escape game" premiered at Tokyo Dome CityW from July 15 to September 24, Hirakata ParkW from July 21 to September 18, and Greenland amusement park from July 22 to September 3.

The attraction was set in Morioh, where serial killer Yoshikage Kira has been hiding for years. After witnessing his crime, participants were targeted by Kira and forced to traverse the park to solve puzzles and obtain clues. By overcoming the repeated attacks by Sheer Heart Attack and Killer Queen, participants defeated and captured Kira with their own "awakened Stand".

Game time was around 2–3 hours. A Rookie Course was available for children in elementary and junior high school. People who bought tickets in advance received a The Hand paper fan.[1] 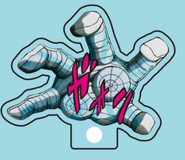 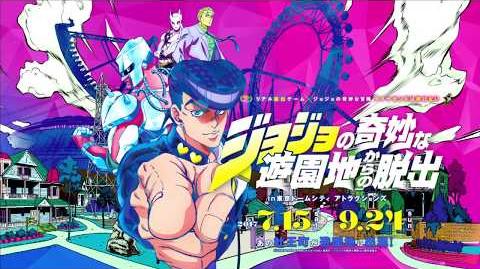