Esidisi of the Flame (warrior title)

Famicom Jump: Hero Retsuden
The character featured in this article is sometimes referred to as "ACDC".

Esidisi (エシディシ, Eshidishi) is an antagonist featured in Battle Tendency. He is the second highest ranked Pillar Man after Kars and battles the Ripple users for the possession of the Red Stone of Aja.

Esidisi's appearance is that of a tall, dark skinned, and very well-built man. He has light hair, protruding in a bouffant tuft from under a tall headpiece. A dark painted or tattooed X mark spans his face, joined at the bridge of his nose, touching the middle of his forehead and jaw. He commonly wears a nose ring in his right nostril, and great, thick hoop earrings. His brow rests in a sinister scowl.

During his fight with Joseph, his top is bare save for leather-like patches stitched to his skin at his shoulders and chest.

Like Wamuu and Kars, Esidisi is very confident in his powers and abilities and sees humans as inferior. He is particularly smug towards Joseph and enjoyed outwitting the human. Despite this, Esidisi is very affable and acts calm a majority of the time, tranquilly assessing the situation before taking action. Esidisi never loses sight of his goal, and will always act to get the Red Stone of Aja. But he has a dangerous temper so he tends to emotionally break down as a calming mechanism, the abrupt tantrum and sobbing also serving as an unsettling destabilization tactic.

Esidisi's devotion to Kars' goals is so adamant that he would gladly lower himself to bring them to fruition, as Joseph noted to be the Pillar Man's motivation for possessing the defenseless Suzi Q.

Flame Mode (炎の, Honō no Mōdo): Using Flame Mode, Esidisi is able to raise his body temperature in order to heat his blood up to 500 degrees Celsius, then hurl it out melting anything the blood touches. In the anime, it is called the "Heat Mode" (熱の, Netsu no Mōdo).

Body Manipulation: Like other Pillar Men, Esidisi can freely manipulate his body structure. When his body was destroyed, he was able to alter his brain and nervous system to continue thriving as a parasitic organism that can possess a human body.

Master Strategist: Despite his violent temper, Esidisi is a brilliant tactician, being able to see through Joseph's deception and even managing to thwart his insidious plans using his own, something no other villain in the series demonstrated. Esidisi also traveled to China and is knowledgeable about Sun Tzu's Art of War, including his theory "all warfare is based on deception".

Esidisi is a member of the race known as the Pillar Men. One of the few to not object to Kars' ideals, he was spared from their clan's genocide and became right hand man to Kars. Esidisi accompanied Kars to the old world to find a flawless Red Stone of Aja, briefly ending up in China before his group's search brought them to Rome. There, the Pillar Men battled Ripple users before entering a hibernation state under the Roman Colosseum. The wall that Esidisi and the others embedded themselves in was booby trapped to impale potential prey for nourishment as seen with Mario Zeppeli. At some point, the Nazi learn of the Pillar Men and made attempts to study them before deeming them a threat to the rising Third Reich.

After being awakened by Wamuu, scolding the younger Pillar Man for instinctively striking Kars for standing in his shadow, Esidisi stood back as their ward battled Caesar Anthonio Zeppeli and then Joseph Joestar. He follows Wamuu when Joseph lured him away from Caesar and Robert E. O. Speedwagon and foils Joseph's plans by swallowing the dynamite he had planned to use. In desperation, Joseph bluffs Wamuu into giving him a month to train for a worth-while battle. Intrigued by Wamuu placing a wedding ring inside the human's heart, Esidisi ups the ante by placing his own ring around Joseph's throat, mentioning that the poison's antidote was in his nose ring. The Pillar Men then set out in search for the Red Stone of Aja.

Almost a month later, Esidisi discovers the location of the Red Stone of Aja and heads to Air Supplena Island in Venice. Once there, Esidisi kills Loggins as he was preparing for Joseph's final test. When Joseph arrives, he challenges Esidisi and manages to chop off his forearm causing the Pillar Man break down in tears and sob to keep his murderous rage under control. Once recomposed, Esidisi reveals in-depth knowledge of Sun Tzu's The Art of WarW, proceeding to take Loggins' arm as his own while subjecting the corpse to his boiling blood. Esidisi then disables and counters Joseph's deceptive tactics while wounding him with drips of his boiling blood. Seemingly about to defeat Joseph, Esidisi nevertheless falls for Joseph's sleight of hand as he used a Cut and restore rope trick to leave the Pillar Man open to be subjected to his Ripple. This causes Esidisi's body to crumble as he explodes after a failed final attempt with only his nose ring left.

Despite his apparent death, Esidisi survived, yet was reduced to a disembodied nervous system that latched onto the unsuspecting Joseph's back as he returned to Lisa Lisa. It was at that time that Esidisi transferred himself into the body of Suzi Q, using her to mail the Super Aja to Switzerland before revealing himself. The Pillar Man attempts to stall the Ripple users by using Suzi as a literal human shield before deciding to turn her into a "boiling blood bomb" to kill everyone. Thinking quickly, Joseph and Caesar collaborate a Ripple attack from both sides, their Ripples cancelling each other out to safely remove Esidisi without any harm coming to Suzi Q. Esidisi attempts to cling onto Joseph but is shortly finished off by the sunlight.

Esidisi appears as one of the thirteen rivals who challenges the player's party during the RPG-like final battle. His attacks are "Heat Mode" and "Blazing King's Giant Wheel" and his special ability "It's not faaaaair!" boosts his attack power by 1.5 once his health is below 100.

Due to the game's release date being around the time Part 2 only reaching the portion prior to Esidisi's battle against Joseph, only Santana and Esidisi appear as the enemies faced during the JoJo's Bizarre Adventure part of the game, leaving out Kars and Wamuu.

Esidisi makes his first appearance as a playable character in the PS3 title; he was confirmed alongside Caesar Zeppeli. In the English release of the game, Esidisi's Flame Mode is renamed "Heat Control Mode".

Since Esidisi never exactly fought extensively in Part 2 (he was only shown fighting Joseph), most of his normal attacks consist of punches and kicks. Along with Wamuu and Kars, Esidisi uses the "Mode" style as part of his moveset, which allows him to temporarily boost his strength and performance among other things, at the cost of the Heart Heat Gauge.

During a fight, Esidisi can use several different attacks that were featured in Battle Tendency.

By spending his Heart Heat Gauge, Esidisi can activate Heat Control Mode in order to not only increase the overall damage and hit number of his moves, but exclusive to him, make all attacks involving his veins and blood set the opponent on fire and take gradual damage. This mode lasts until the HHG empties, but can be extended through dealing or taking damage, as well as ended at any time in conservation.

Expending a stock of the HHG grants Esidisi access to Erratic Blaze King Mode, rapidly damaging the opponent if they are too close to him with the heat alone, though they can recover the lost health if they do not take direct damage for too long. This mode is on a set timer, and will end when the stock is used up.

Esidisi's HHA, "Think fast!" is the fire-powered kick he used to murder Loggins. If the kick connects, it will hit the opponent in the abdomen, making them go limp. Using the other leg, Esidisi sends the opponent off in a roudhouse-style jump kick. The HHA replenishes a small amount of Esidisi's health on success, having drained the opponent's blood during the initial kick. Esidisi may perform his HHA while Erratic Blaze King Mode is active, regardless of how much of the Heart Heat Gauge he has left. Doing so however, will drop his HHG to zero.

Esidisi's GHA attack, "Burned to a crisp!", is the same move he attempted to use on Joseph Joestar to finish him off. While the move was never followed through in the source, the game shows it in full; Esidisi sends out most of his veins, and if they hit the opponent, the veins will enter their body before he violently pumps them with boiling-hot blood. The opponent is incinerated from the inside-out as an explosion occurs.

When Retired with an attack that does not result in a hard knockdown or blow-back, Esidisi's brain will tear itself out of his body before evaporating, referencing his demise in the series. When caught in Jolyne's "The best angle to strike from!" move, Esidisi performs the same pose as when he was caught by Joseph's own string trap in the manga.

Esidisi appears as one of the Part 2 characters who possess a Metal Striker, and also as the one of the bosses faced in the events for the Part 2 Story Mode.

Esidisi returns as a playable character in Eyes of Heaven, he was confirmed alongside the other Pillar Men, Kars and Wamuu.

As a Pillar Man, Esidisi has the special ability Switch Mode, exclusive to the Mode style. His specific Mode is Heat Control Mode. He is also able to stand and walk on the spike pit in the Air Supplena Island stage without taking damage (though he will still take extra damage if knocked down onto the spikes).

If paired against Avdol the two will note their similar abilities and they wonder who's fire powers are superior.

If paired with Kars, Esidisi will ask where Wamuu is, and Kars will reply that although he is out looking for the Red Stone, the two of them should be more than enough to deal with their opponents.

In an interaction with Old Joseph, Esidisi seems to be able to detect Joseph's Stand with Joseph believing that Esidisi senses the Stand Energy from his body.

Unlike the previous game, Esidisi's main color scheme is now based off his appearance in the anime.

He is paired with Mariah in the Eyes of Heaven Tournament, defeating Rudol von Stroheim and Okuyasu Nijimura in the first round, and Narancia Ghirga and Diego Brando in the second. In the semifinals, they were eliminated by Jotaro Kujo and DIO in the first round. 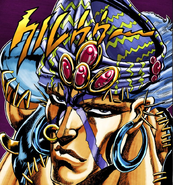 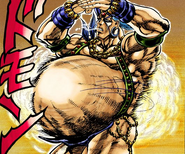 Esidisi after swallowing a stick of dynamite 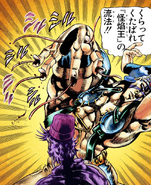 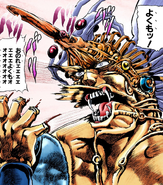 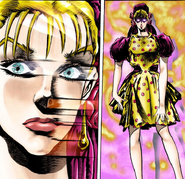 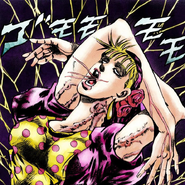 Esidisi's death by the sunlight. 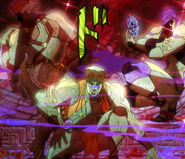 Esidisi and his companions awakening from a 2,000 year slumber

Esidisi after swallowing a stick of dynamite 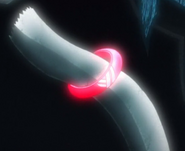 Nonchalantly walking over a pit of spikes

Attempting to get Joseph out of his way by force

Esidisi crying over his lost arm

Stealing and assimilating Loggins' arm as a replacement

Esidisi unleashing his veins while unveiling his Mode

Attacking Joseph with his boiling blood

Esidisi's hat and hair peel away, revealing his true form

Esidisi's body ravaged by the Ripple

Finally exploding as Joseph watches on

Esidisi obscured with Kars in the ending credits (Episode 14)

Esidisi's render in All Star Battle

Esidisi during his GHA, ASB

Esidisi in development for All Star Battle

Esidisi's intro in Eyes of Heaven

Esidisi with the other Pillar Men, Diamond Records 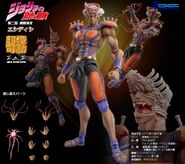 Esidsi as a figure from Super Action Statue 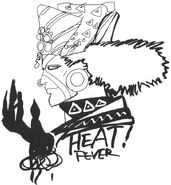